How did the Islamic (Hijri) Calendar Begin? Posted by Fisal on Oct 14, 2015 in Arabic Language, Culture, Pronunciation, Vocabulary

Ahlan أهــْــلاً , Arabic lovers! Today is the first day of the new Hijri year (1437), so Happy New Hijri Year to everyone! In today’s post we are going to know how this calendar was started and who started it. 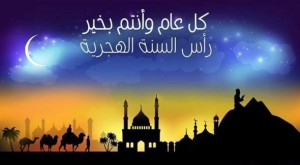 If you have read these previous two posts, you will notice that:

Prophet Muhammad was born some time after the Year of the Elephant. He soon became an orphan as he lost his father and mother. His uncle Abo-Talib أبــو طــالــب adopted him. As Muhammad مــحــمــد was growing up, he acquired a very good reputation among the people of his tribe (Qu’raysh قــريــش or Mecca مــكــة as it is known today) and was known as The Truth-Teller and the Loyal الــصــادق الأمــيــن. He was honest, wise, and spiritual and never drank wine.

At the age of forty and while he was in his meditation hideout (a cave on top of a mountain around Mecca), Muhammad received the angel Gabriel جــبـريــل for the first time and since then his Islam message was started as he was ordered to pass Allah’s message to all people and to worship only One God. Soon, Muhammad secretly started his mission and began with his closest relatives and friends. The people of Mecca were pagans and they quickly heard of Muhammad activity that was against their interests. They oppressed him and his followers for thirteen years.

During these thirteen years, Muhammad sent good Muslim followers to other cities and villages to spread the word of Islam. Some people, who heard the word, came to Mecca and met Muhammad in person. Among those, was a delegation وفــد from Madinah الــمــديــنــة. Those good and new Muslim people from Madinah offered refuge to Muhammad and his followers. So, when Muhammad lost all freedom of expression حــريــة الــتــعــبــيــر and saw his followers dying from torture, He ordered them all to migrate to Madinah and he himself followed them in the company of his best friend Abo-Bakr. Now, this Migration هــجــرة (Hijrah) marks a very important event in the Islamic history because Islam in Madina was secure and Muslims had all the freedom to spread the word of Allah everywhere. Day after day, Islam gained more land and more and more followers. Prophet Muhammad died when the Muslim lands were expanding to include all the Arabic Peninsula.

Omar Ibn Al-Khattab عــمــر بــن الــخــطــاب was the second Muslim Caliph. During his time, the expansion of the Muslim lands was exceptional. One day and 17 years after the Hijrah incident and precisely in the year 622 A.D. the Caliph Omar received a Saqq صــك (check شــيــك) that was due in the month of Sha’ban شــعــبــان. Muslims till that time still had no calendar of their own, so Omar wondered which Sha’ban? Was it the last? Is it this current? Or Is it that coming next year!?. Because of this incident, Omar had a meeting with his assistants and decided to start their own Muslim calendar. The question was when to start it. There were many suggestions of important Islamic events, but Ali Ibn Abi-Talib عــلــي بــن أبــي طــالــب suggested the year when the prophet migrated from Mecca to Madina and that was it.

So, The Muslim calendar was started by the Second Muslim Caliph Omar Ibn Al-Khattab in the year 17 A.H. (After Hijra). It is also called the Arabic Calendar or the Islamic Calendar.