The Gender of Arabic Nouns (1) Posted by Ibnulyemen اِبْنُ اليَمَن on Jul 17, 2018 in Grammar, Vocabulary 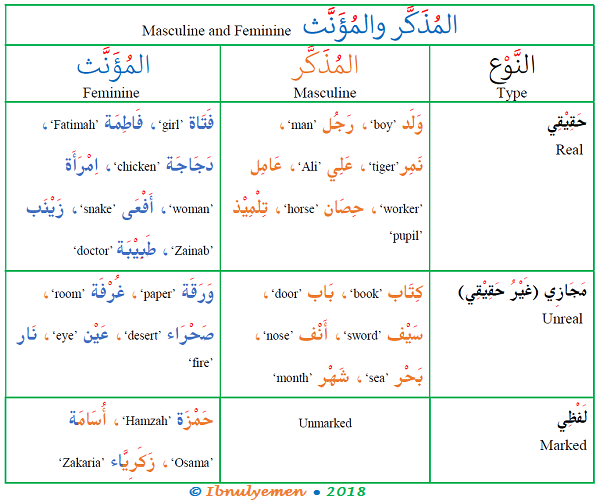 The unreal masculine noun is the noun that is treat as a male human or animal, but it is not one, such as كِتَاب ‘book’, نَهْر ‘river’, قَلَم ‘pen’, بَحْر ‘sea’ قَمَر ‘moon’, بَاب ‘door’ سَيْف ‘sword’, هَاتِف ‘phone’, حَمَّام ‘bathroom’ and so on. Most learners of Arabic assume that these nouns are masculine forms since they don’t have a final feminine suffix marker (see below), but that is not always the case, as there are nouns that don’t have the feminine marker, but they are feminine, as seen below.

The unreal feminine noun is the noun that is treat as a female human or animal, but it is not one, such as صُوْرَة ‘picture’, سَيَّارَة ‘car’, شَمْس ‘sun’, صَحْرَاء ‘desert’, نَار ‘fire’, أُذْن ‘ear’, رِجْل ‘leg’, عَيْن ‘eye’, طَاوِلَة ‘table’, دَار ‘house’ and so forth. Although some of these nouns don’t have the feminine marker, but they are still treated as feminine.

While it is easy for a native speaker to tell whether the noun is masculine or feminine (given their intuition), learners of Arabic should learn the gender of these words as they come across them. This is the best learning strategy.

While masculine nouns are not marked for masculinity, feminine nouns are. The marked feminine المُؤَنَّث اللَّفْظِي, which literally means verbally marked feminine, but in reality it is not feminine, is the noun that has the feminine marker but it refers to a masculine noun. This is especially common in the case of proper nouns, such as حَمْزَة ‘Hamzah’, مُعَاوِيَة ‘Mu’awiyah’, أُسَامَة ‘Osama’, زَكَرِيَّاء ‘Zakaria’, عَلَاء ‘Ala’a’ and alike. These nouns end in ـة taa marbuTah and alif and hamzah, which are feminine markers, but they are masculine.

It is the most common feminine marker in Arabic. Its addition to the end of nouns is accounted for as follows:

(1) It is intrinsically part of a nouns that refer to female entity, as in these examples:

(2) It is added to adjective / nouns to derive the feminine form from the masculine, as in these examples below. By dropping the ـة / ة, we get the masculine form.

However, there are adjectives to which we cannot add ـة / ة as a feminine marker because the same form of these adjective is used for both masculine and feminine forms. The most common adjective of these is weighed (in the Morphological Measure) as فَعُول and فَعِيْل, as in these examples:

In the following phrases, you can see that the same form of these adjective is used with masculine and feminine nouns:

(3) There are nouns the masculine of which refers to the type name. Adding the ـة / ة to the end of these nouns is indicates a one of these types, as in these examples:

It is a feminine marker in the following cases:

(1) The masculine form of adjectives that are weighed (in the Morphological Measure) as فَعْلَان is weighed as فَعْلَى in the feminine (i.e. ending in alif maqSuurah), as in these examples:

(2) The masculine form of a comparative noun (adjective) that is weighed as أَفْعَل is weighed as فُعْلَى in the feminine, as in these examples:

(3) All the verbal nouns that end in ـى alif maqSuurah, as in these examples:

(4) Feminine nouns and adjectives that naturally end ـى alif maqSuurah, as in these examples:

ثَكْلَــى ‘bereaved of a child’

It is a feminine marker in the following cases:

(2) Feminine nouns and adjectives that naturally end اء / ـاء alif mamduudah, as in these examples:

In the next post, you will learn about some irregularities of masculine and feminine forms of nouns. You will also see and read example sentences in which these forms are used contextually.