Chinese Bamboo Instruments Posted by sasha on Mar 26, 2018 in Culture

One of the most interesting aspects of any culture is music. China has a rich musical tradition with countless unique musical instruments. We’ve already covered two different types of stringed instruments – bowed and plucked – so go back and read those posts to learn more. In this post, we’ll check out some Chinese bamboo instruments to learn about their history. There are a few awesome videos as well so you can hear them in action. 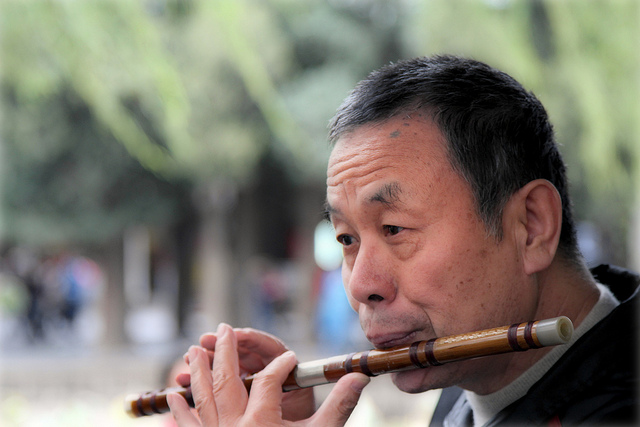 One of the most popular Chinese flutes is the Dizi (笛子 – dí zi), which you can read all about in this post. Another one is the Xiao (箫 –  xiāo). This is a vertical end-blown flute made from purple bamboo that has a lower pitch than the Dizi. Before the Tang Dynasty (唐朝 – Táng cháo)  (618-907) , the term xiao referred to the Chinese panpipes. After the Tang, however, this term came to be associated specifically with these vertical end-blown flutes.

A peaceful Xiao performance floating down a river.

Another term commonly used (especially in Taiwan) is Dongxiao (洞箫 – dòng xiāo) – dong meaning “hole.” This term came to be used to differentiate this style of instrument from the panpipes, which have no holes. Modern xiao have either six or eight holes, and are usually pitched in the key of G, with the lowest note being a D. This instrument produces soft and gentle tones and is suitable for solo performances, as well as duets with the Guqin zither.

A Xiao duet with a Guzheng.

The Chinese Guan (管 – guǎn – lit. “tube” or “pipe”) is a double-reed wind instrument. This instrument differs depending on which region of China you’re in. Up north, it’s known as the Guanzi (管子 – guǎn zi) or Bili (筚篥 – bì lì) and is made from hardwood. Down south, it’s called the Houguan (喉管 – hóu guǎn –  lit. “throat gun”), and it became very popular in Cantonese opera during the 1920s. Usually, the guan has seven frontal finger holes and one thumb hole. The length of a traditional guan varies from 7 inches (18 cm) to 13 inches (33 cm), or up to 50 cm for a large Cantonese houguan. This style has a range of about one octave, while the Northern guanzi has a range of two and a half octaves, due to its overblowing technique.

A Guanzi duet with a piano.

It’s believed that this instrument originates from Northwestern China – the area that is now Xinjiang (新疆 – Xīn jiāng). It was very important in court and ritual music during the Tang Dynasty. Later, it became popular in the drum and wind (鼓吹 – gǔ chuī) folk ensembles. These days, it is also used in Beijing opera to depict military scenes. This traditional instrument has a very peculiar tone and is often used to add special colors to ensemble and orchestral music. 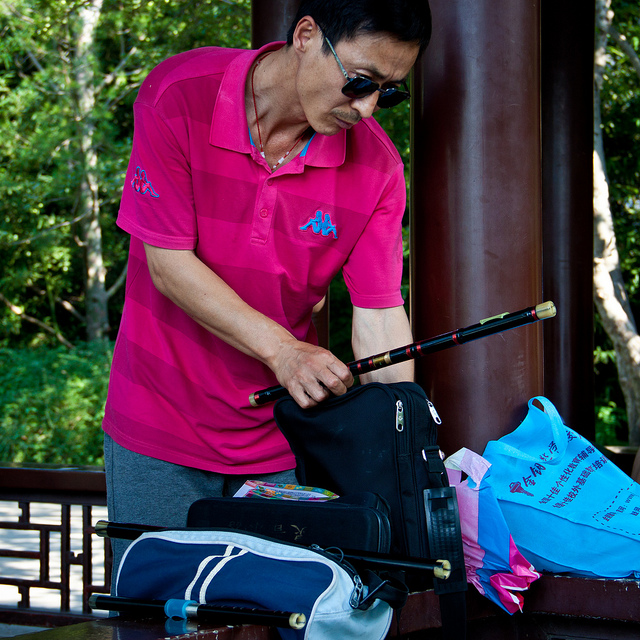 While the Bawu (巴乌 – bā wū) might be shaped like a flute, it is in fact a free-reed instrument, with a single metal reed. It is played in a traverse (horizontal) manner, and it originates from Southwest China’s Yunnan Province (云南省 – yún nán shěng), which is home to many of China’s ethnic minorities.

In Southern Chinese mythology, there is a fantastic story associated with this instrument:

“Two young Hanis fell in love with each other and in one day a demon grabbed the girl. Then the demon cut off her tongue, and threw her into the deep mountains. Following the advice from a bird, that bamboo can talk, the girl made an instrument from bamboo pouring out her misfortune through it. On hearing her sad voice the villagers came to kill the demon and relieved the girl.”

The Bawu is know found all throughout China, and its rich, mellow tone has become a favorite with composers of film soundtracks. You might recognize the sound of this ancient instrument, as it was featured heavily in “Crouching Tiger, Hidden Dragon” (卧虎藏龙 – wò hǔ cáng lóng). In recent years, the Bawu has become popular with European composers, proving that ancient Chinese instruments are as relevant today as they were thousands of years ago.

A very interesting variation of the traditional Bawu.

If you travel to China, be sure to seek out some traditional music. In my experience, the best place to find people jamming on classic Chinese instruments is at local parks. Oftentimes, you’ll find an entire group practicing together. It’s a great, free way to experience traditional Chinese music. Of course, you’ll want to learn some Chinese before you go so you can chat with the musicians. Who knows – maybe they’ll even give you a free lesson and let you try it out!