It’s been quite a while since our last post about Culture Shock in China, so here’s a quick recap with the links of the previous posts for those who missed out:

Today, I’ll dive into one aspect of Chinese culture that has always been hard for me to understand, even after 5+ years living in the country. A big part of Chinese culture is the concept of “face” (面子 – miàn zi). This basically means one’s reputation, and it goes for all social circles – family, friends, business, and society at large. The concept of saving face is incredibly important in China, and it can be quite frustrating for foreigners. To “lose face” (丢面子 – diū miàn zi) is terrible, and is avoided like the plague. 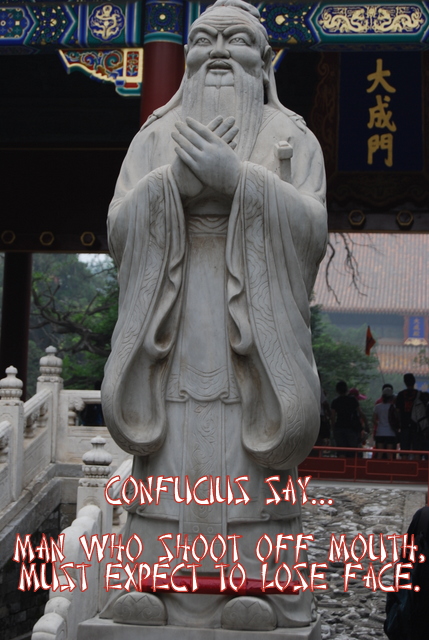 Here are just a few examples of the concept of face, based on my experiences throughout the years:

Just go out to eat with a big Chinese group for a good lesson on face. Usually, the person who invited you out is expected to pay for everything. If anyone else tries to help pay the bill, that person loses face. Also, they need to order more food than is necessary. If you clear your plate, they will just order more food so as to save face. Even if there are tons of leftovers on the table, nobody will want to take it home – asking for the food to-go shows you don’t have enough to eat at home and you lose face. Luckily for me as a 老外 who cares nothing about face, I’m more than happy to pack all of the delicious leftovers up and take them home. I may have lost face when I did that with a group of Chinese businessmen, but I sure saved a lot of money and ate pretty damn well for a week.

The concept of face is also closely related to the importance of developing relationships that is so paramount in Chinese culture. Known as “guan xi” (关系 – guān xì), this complicated system is of utmost importance in China, affecting just about every part of life. By giving other people face and gaining it yourself, you in turn are able to establish more and more guan xi with people. Losing face can damage these relationships, which can have various adverse effects. If you’re interested in doing business in China, you’ll want to spend some time understanding more about guan xi and the concept of face – without any knowledge of these key components of Chinese culture, you probably won’t go very far.

After nearly five years in China, I’ve given up on understanding this concept completely. Thankfully, as an English teacher and freelancer, I’ve never had to worry so much about face and guan xi in my day-to-day life. Of course, it’s good to have a basic understanding so you don’t go making people around you lose face. Doing so is one surefire way to ensure you don’t make many friends in China. For those of you who are in a similar position of confusion when it comes to face in Chinese culture, comedian Phil Nee does a hilarious job of summing it up:

Do you have any experiences or advice to share about the concept of face in Chinese culture? We’d love to hear from you in the comments below!