Culture Shock in China – Apartments Posted by sasha on Apr 3, 2014 in Culture

It’s been a while since we’ve talked about culture shock in China, so here are the links to the past posts for those of you who may have missed them:

While all of the above examples happen to people just visiting China, many foreigners choose to make the Middle Kingdom their home and have the pleasure of continuing their culture shock. For those wishing to spend some serious time in China, an apartment hunt is sure to give you some serious shock. Let’s take a closer look… 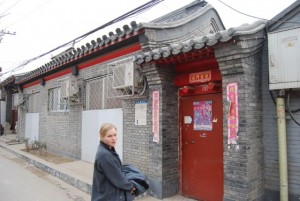 My girlfriend thrilled at the prospect of seeing more crappy apartments.

Finding an apartment in a Chinese mega-city seems easy enough – there are high-rise buildings everywhere you look, after all. Not so fast, though. This is China (TIC), and nothing comes easy. You may browse through online ads and see a nice looking pad that fits your requirements, and you’ll excitedly call up the number on the ad. Although the ad is written in English, the loud voice at the other end of the line is sure to not speak a word of it. A great chance to practice your Chinese, but not what you were expecting! After much struggling, you finally manage to agree on a time to see the apartment. Of course, you are given horrible directions and it ends up taking you an extra hour plus a few more phone calls to find the place. It turns out that the “near the subway” part of the ad really means a 30-minute walk. Upon entrance into the apartment, you’re shocked to find out that it looks absolutely nothing like the pictures from the ad. You pull out your phone and show the pictures to the agent:

“I know, but I wanted to show you this one first! It’s very cheap, and it’s just as good!”

“But I didn’t want to see this apartment. I took the morning off of work to go see this one!”

Welcome to the horrible world of Chinese real estate. Agents are eager to rent out their most dilapidated and crummy units first, as chances are they’ve been sitting on the market for quite some time. Since you’re just a dumb 老外, you get to be taken on numerous tours of these hellish apartments that make some jail cells look appealing. During our last apartment hunt in Beijing, my girlfriend visited over 30 places with agents before we finally just inquired about available spots in the head office of a complex where some friends were living. If you should find yourself looking for a place, this is your best bet. Use of any real estate agent is sure to result in numerous visits to disgusting places that you wouldn’t want to live in in a million years, and should you actually find one that isn’t downright awful, you’ll be forced to pay one month’s rent as a finder’s fee for the agents.

Big Man on a Little Bike – a friend of a friend gets a ride on an apartment hunt in Beijing. 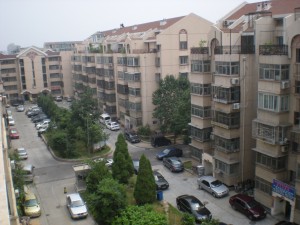 A common apartment complex in China.

Leave your preconceived notion of what an apartment should be back in your home country, because unless you’ve got the big bucks to throw down on an international place, you’re going to have to get used to Chinese standards. Here are a few things about Chinese apartments that might give you some culture shock: 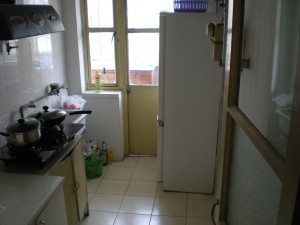 Yep… this is a kitchen. 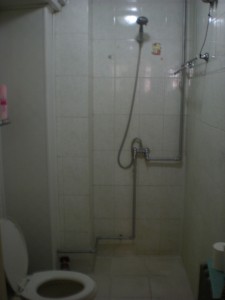 Run of the mill Chinese bathroom. 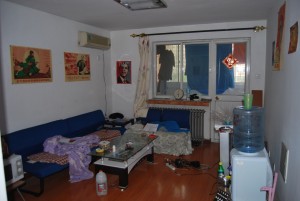 You call that a couch?!

Now, aren’t you excited to move to China?!

Here’s a hilarious dialogue about a guy renting a room.