Come to China and you’re sure to see one face everywhere you go – that of Mao Zedong. The Chairman is on all of the RMB notes from 1 up to the 100, statues of him can be found in just about every city, and small figurines as well as his “Little Red Book” line the stalls in souvenir markets. Although Mao is regarded in the west as a brutal dictator and is mostly known for his disastrous policies such as the Cultural Revolution and Great Leap Forward, many people in China still revere him for uniting the country in 1949 after years of both a brutal civil war and a Japanese invasion. Over the last few months, we’ve been taking a closer look at Mao and his life, and our series comes to a close today. Here’s a recap of the past posts in case you missed them: 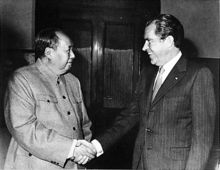 In the later years of his life, Mao had one more big political move that would shock the world. Unlike his previous failed domestic programs, this would be a move on the international stage that started the wheels in motion for big changes in China’s foreign policy. In 1972, with his health deteriorating, Mao decided to meet with US President Richard Nixon. As no US leader had ever visited the Middle Kingdom before, this was to be an historic meeting. Unbeknownst to many (including plenty of people in Nixon’s staff), Henry Kissinger had secretly flown to Beijing the previous year to begin arrangements. As a matter of fact, once confidential documents eventually proved that Nixon was thinking about opening up communications with Beijing from his very first day in the White House.

Although Nixon would stay in China for a whole week, he only had one meeting with Mao, on February 21, 1972. If you’re so inclined, the entire transcript of the meeting can be found here. Nixon’s visit to China ended with the issuing of the Shanghai Communiqué – a diplomatic document that stated the US and China would work to normalize their relations. When you look around you in Beijing these days and see McDonald’s, Apple, Starbucks, and suburban American kids like me teaching English in the universities, you can’t help but think that it’s quite possible none of these things would be there if not for the meeting between Mao and Nixon.

An interesting little video about the meeting between Nixon and Mao.

A few years later, Mao’s health problems caught up with him. He had lung and heart troubles, including a few heart attacks. Just four days after the last one, the Chairman bid this earth farewell. The official announcement simply stated, “Mao Tse-tung passed away at 0010 hours on Sept. 9 because of the worsening of his illness and despite all treatment, although meticulous medical care was given him in every way after he fell ill.” Some believe Mao suffered from Parkinson’s disease, while others think it was ALS (Lou Gehrig’s disease). Whatever it was, the founder of modern day China was gone. He was 82 years old.

After his death, Mao’s body was draped in a flag and displayed in the Great Hall of the People for a week, during which time millions of grieving Chinese and plenty of foreign dignitaries paid him a visit. On September 18th, the country observed three minutes of silence, followed by a long eulogy from Hua Guofeng, the man who took over for Mao as Chairman upon his death. 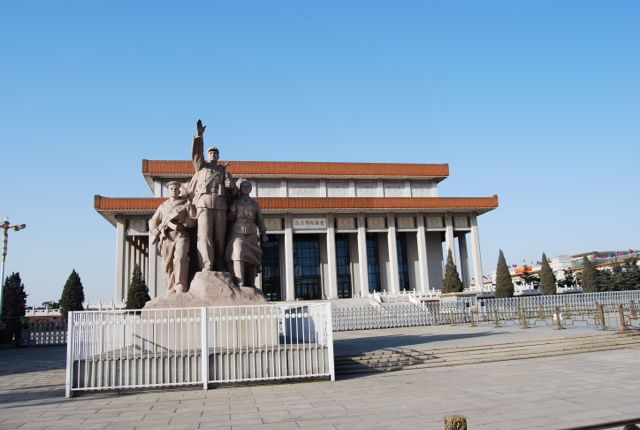 Despite his wishes to be cremated, Mao’s preserved body remains on display in his mausoleum within Tiananmen Square. His legacy is a complicated one, both in China and around the world. On the one hand, he is idolized in China for unifying the country and ending a long and bloody civil war, as well as for improving the status of women in the country and the literacy rate. On the other hand, many are quick to point out that more people died under Mao than any other ruler in the 20th century. Some claim that his policies helped China industrialize and modernize, thus leading to its rapid economic growth, while others believe the massive growth of the Chinese economy only happened after Maoist policies were abandoned. Although it seems like people are pretty split on Mao, the Chinese government has made up their mind – he was right 70% of the time.