Sightseeing in Datong Posted by sasha on Apr 24, 2013 in Culture, Uncategorized

While Datong itself is an interesting city with a long history, the main reasons for traveling there lie outside of the city. Most tourists travel here to visit the Yungang Grottoes (云冈石窟 – yún gāng shí kū), one of the three major Buddhist sculptural sites in China. Way back in the day, the Northern Wei Dynasty established their capital at Pingcheng, which is now known as Datong. Buddhism was adopted as the official religion, having made its way there via the Silk Road. The statues were completed between the years 460 and 525, and in total there are 252 grottoes with over 51,000 Buddha statues. Through the years, the statues have been exposed to heavy weathering; thus, many efforts have been made to repair and refurbish them. For example, wooden temples were built outside some of the caves during the Liao Dynasty, but they were destroyed in a fire some years later. Despite all of that, many of the statues are in fine condition, and walking through the many caves here really is an incredible experience.

Transport: Take bus #3 out of Datong city and ride it until the last stop. The fare is only 1 RMB/person. 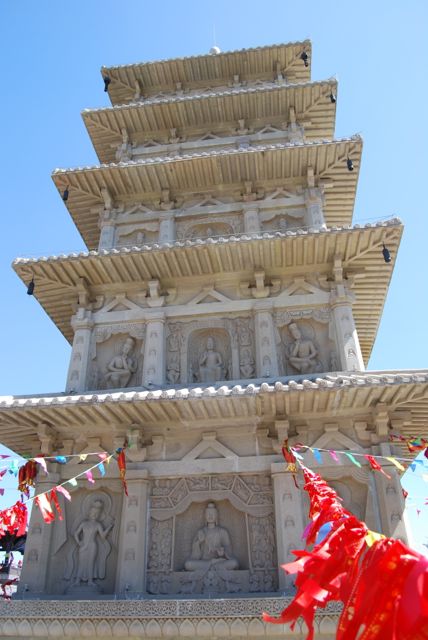 Ling Yan Temple on the way into the grottoes.

Panorama of the temple. 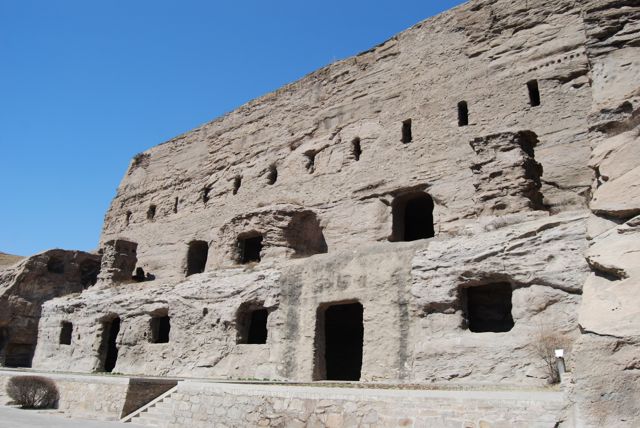 Some of the many caves on site. 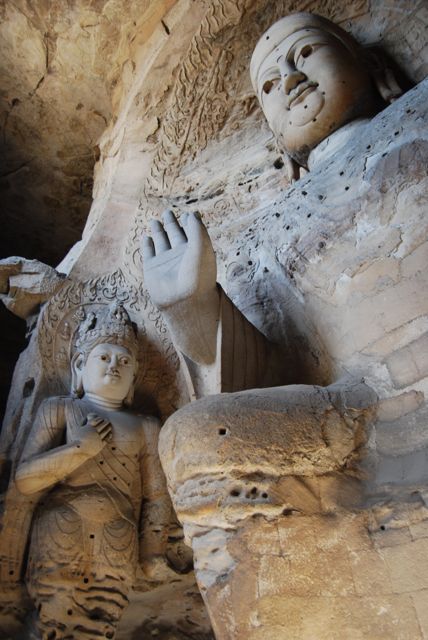 Just a few of the thousands of Buddha statues. 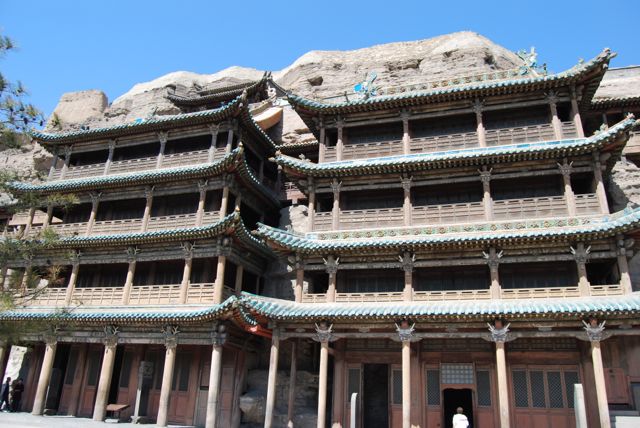 Structures built to protect the caves and statues. 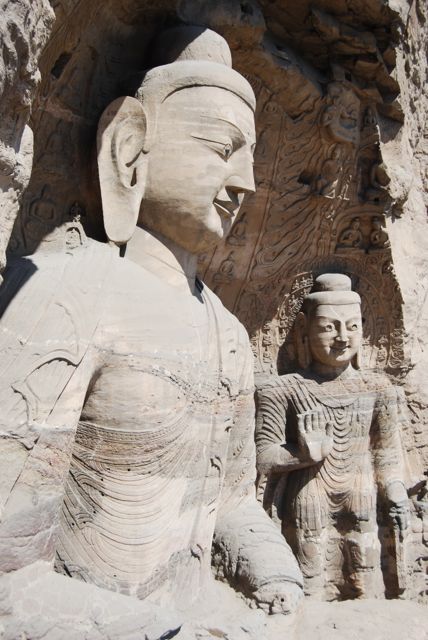 The biggest statue at the Yungang Grottoes.

A nice quiet temple outside of the grottoes. 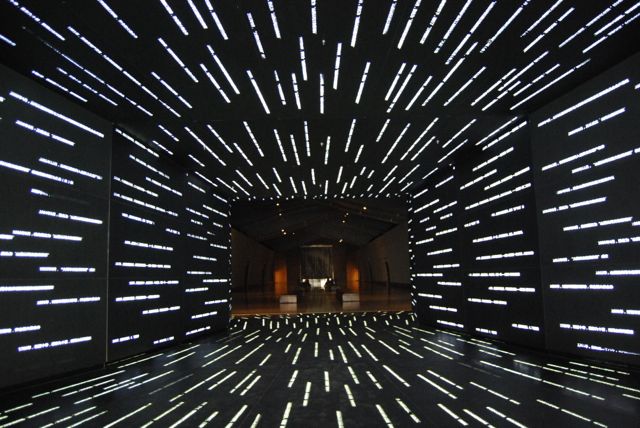 Time machine? Nope, it's part of the museum there.

Another place of interest in Datong is the Hanging Monastery (悬空寺 – xuán kōng sì), a temple built right into a cliff. Built in 491, this temple includes elements of three religions – Buddhism, Taoism, and Confucianism. Of course, it has been repaired on multiple occasions, but it is still an architectural wonder that it even exists in the first place! The monastery was built into the cliff side for a few reasons – to protect it from floods, rain, snow, and sunshine, and also to ensure a quiet environment for worshipping. Be prepared for a little bit of vertigo while walking around in the temple, and if you’re scared of heights, you might not want to look down!

Transport: It’s possible to get out here by switching buses a few times, but you’re better off just hiring a driver for the day. On our visit, we paid 70 RMB/person for a comfortable van to the temple, the mountain, and back. 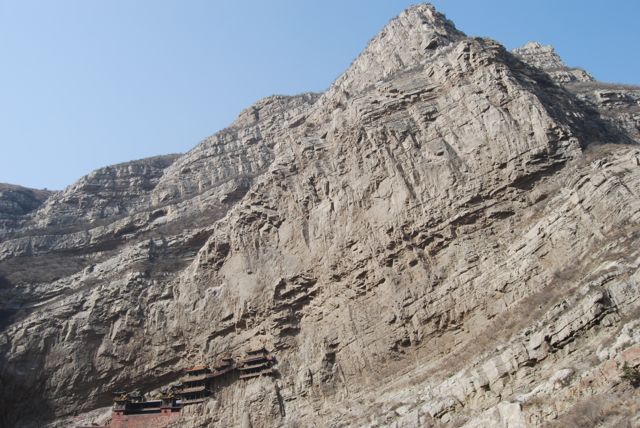 Walking up to the Hanging Monastery. 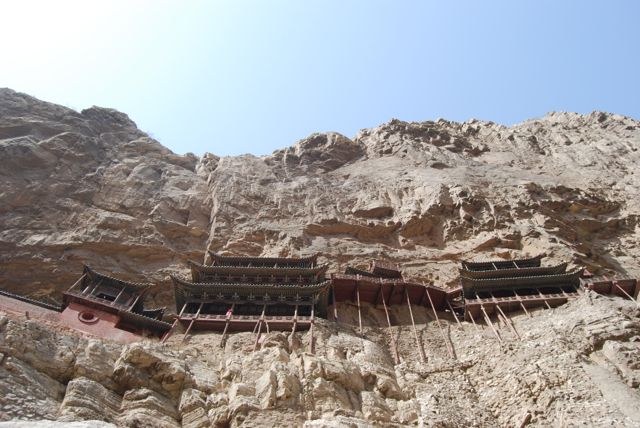 What an incredible sight! 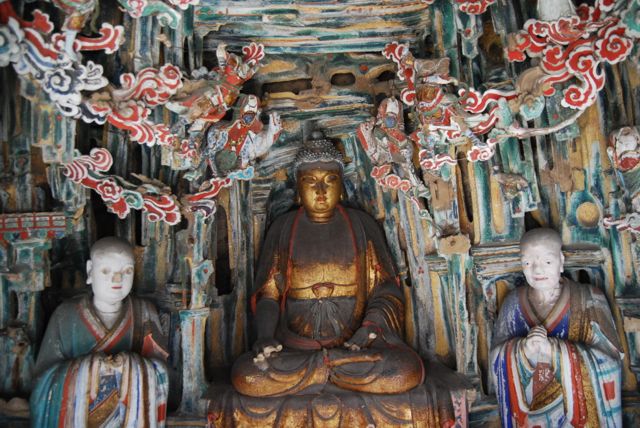 Buddhist statues in the temple. 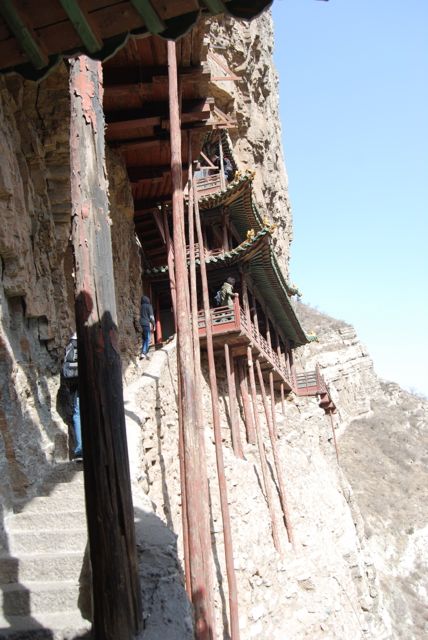 It's just a little freaky up there...

From the Hanging Monastery, you might as well go visit Mt. Heng (恒山 – héng shān), one of the Five Great Mountains of China (五岳 – wǔ yuè). Don’t get it mixed up with the one in Hunan province, though, as they are both named Mt. Heng (the pronunciation is the same but a different Chinese character is used). To avoid confusion, people call this one Northern Heng. It’s also one of the five tallest mountains in the country, with its peak all the way up at 2,017 meters. Due to its northerly location, Mt. Heng isn’t regarded as highly as some of the other mountains. Actually, this makes for a very enjoyable visit, as you won’t be fighting hordes of tourists (like I did when I climbed Mt. Tai). A hike up the mountain isn’t too difficult, and there are plenty of temples to visit on the way up. For a more relaxing way down, you can take the cable car.

Transport: It’s just up the road from the Hanging Monastery, so have your driver take you there after visiting the temple.

Ticket: An entrance ticket is 55 RMB/person, and the cable car will set you back 25 RMB for a one-way ride or 45 round-trip. 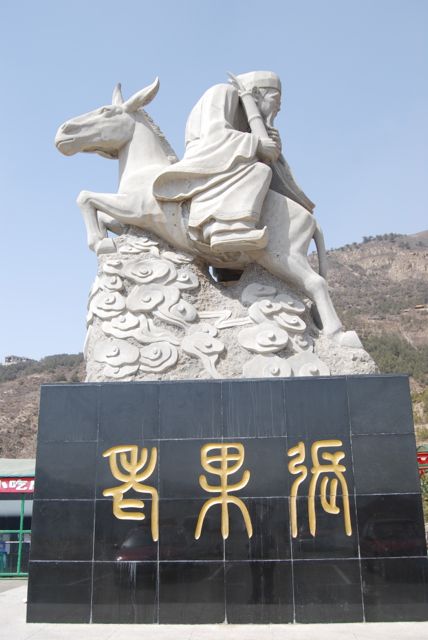 A guy riding backwards on a donkey - it's part of the folklore of this mountain. 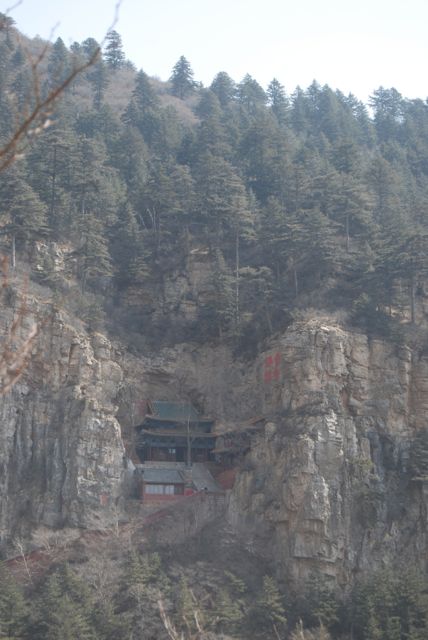 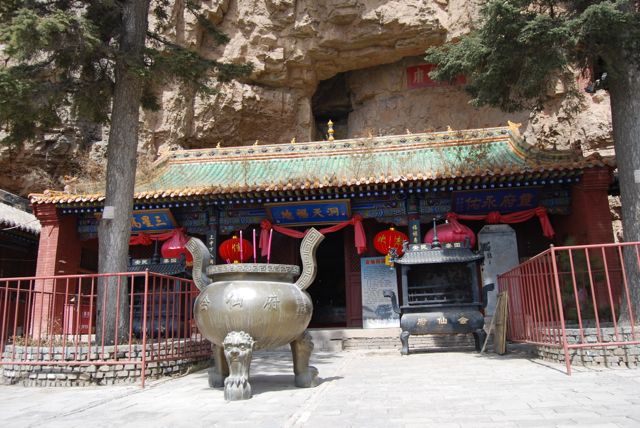 One of the many temples on the way up. 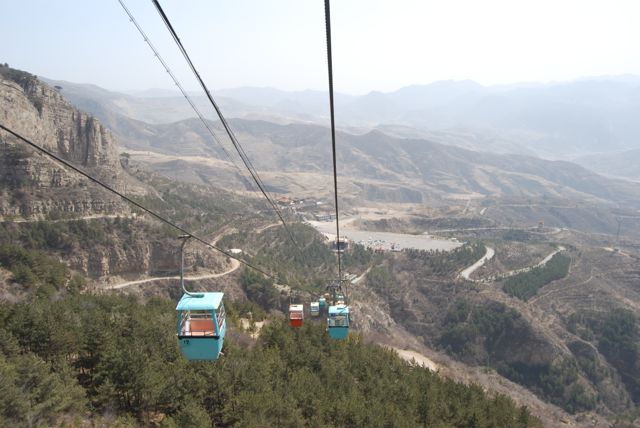 Taking the lazy way down.

Although all of this is doable in one very busy day, it’s much better to spread it out over two days – visit the Yungang Grottoes on your first day, explore the city a little bit, and then head out to the Hanging Monastery and Mt. Heng on the second day. Trains ride from Beijing station to Datong overnight, making this trip very feasible for a long weekend.