You may have seen articles floating around the past couple of days about how 5,000 new German words have been added to Duden. But what is Duden? And what are the words? Duden is a dictionary of the German language. It was first published by Konrad Duden (hence the name) in 1880, and has just released its 27th edition. It is published in 12 volumes which cover different aspects of German language – these volumes include Die Deutsche Rechtschreibung – The German Spelling Dictionary, Die Grammatik – Grammar, and Das Synonymwörterbuch – Synonym Dictionary. 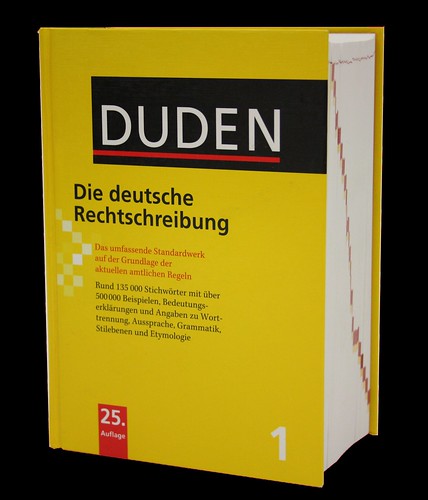 Duden has just added 5,000 new German words to its dictionary. Words are added based on how frequently they are used in the German language, so  each time it gets updated it gives a great insight into contemporary German culture and language. Let’s take a look at some of these new words!

A lot of the new German words are actually English (or Denglish).

tindern – taken from the website name Tinder, the verb ‘tindern’ is now a general term meaning ‘to online date’

Here are a few new nouns that have made it into Duden. They don’t need a translation because they are all … English.

This edition has also added the Danish word for Gemütlichkeit – Hygge.

So are any of these new German words actually German? Yes – here are some of them:

postfaktisch – ‘post-truth’, referring to political campaigns that appealed to people’s emotions rather than to the facts

Der Kopftuchstreit – ‘Headscarf fight’, relating to the debate over whether women should be allowed to wear headscarves in certain professions

ick – The Berlin dialect has made its way into Duden. ‘Ick’ is how they say ‘ich’ in Berlin (no sign of the Bavarian ‘i’ or Hessian ‘isch’ yet, though!)

Certain spellings have been changed, too.

The following are three English words that have previously been given German-style spellings to reflect how they are pronounced in German. In this edition of Duden, their spellings have been changed to the official English spellings, making these the new, official German spellings (confusing, isn’t it?).

The German Eszett/Scharfes S has also had a change in that its capitalised version (see photo below) was officially added.

There is certainly a lot to think about and discuss here. Whether we like it or not, language is ever-changing, and as it changes it gives us a great look into what’s going on in that country. So what does this list say to you about Germany? How does it make you feel as a learner of the German language? Leave me your opinions below!