Catholicism In The Bavarian Language Posted by Constanze on Apr 20, 2015 in Culture, Language

Bavaria is a predominantly Catholic part of Germany. While this is evident in its culture, architecture and religious rituals, it is also evident in its language. To explain, I’m going to take some simple Bavarian phrases and expressions and show you the religious meanings behind them.

For all examples I’ve included the Hochdeutsch (Standard or High German) first, then the Bairisch (Bavarian) equivalent, followed by a short explanation.

Griaß God is a typical greeting in Bavaria. As you may be able to tell, by saying Griaß God you are literally saying May God greet you rather than just hello or good day (as in Guten Tag) There is a way of saying this in Hochdeutsch, too: Grüß Gott. Somebody once told me that they could tell my family came from southern Germany, because I greeted them with Grüß Gott rather than with Guten Tag! That is how revealing the dialects within Germany can be.
Griaß di is a secular way of saying hello (literally: Greet you), and would be Grüß dich in Hochdeutsch.
Servus is another typically Bavarian greeting, and one which means hello and goodbye. It is more colloquial than the previous two, and mostly used between friends and family.

When someone sneezes, you say Bless you! in English. In Hochdeutsch, you say Gesundheit! which literally means Health!
In Bairisch, however, you say Heif di God! which translates to Hilf dir Gott! or Gott hilf dir – in other words, May God help you! What’s interesting is that the English bless you is much more similar to the religious Bavarian translation than the secular Hochdeutsch one. 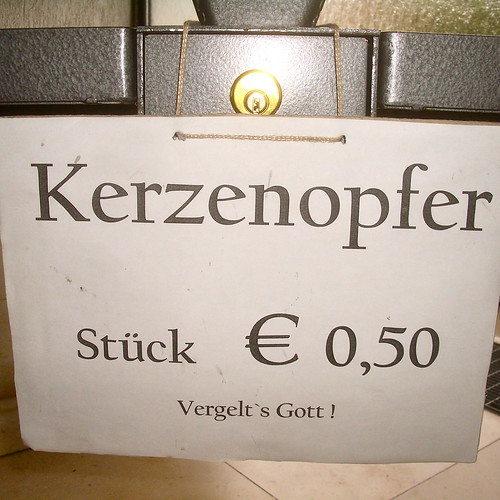 This is a donation box in a church. Give 50 cents to light a candle for the dead. Vergelt’s Gott! Photo by barockschloss on flickr.com under CC BY-SA 2.0

In Catholic Bavaria the worst form of swearing is not actually swearing itself; it’s blasphemy. Words like Scheiße do not have as much of an impact as blasphemous words, so if Bavarians really want to express their anger and frustration, it’s likely that one of these religious phrases above will jump out of their mouths, instead. In fact, Scheiße hardly has any impact in Bavarian everyday conversation. When I was a kid I could freely say Dieses Scheiß-Wetter, for example (‘this shitty weather’) without anyone batting an eyelid, but as soon as I said Bluad Zakrament! I was promptly told to watch my language and never say that again!

I hope this post has been interesting. As always, if you have any questions or suggestions, please leave me a comment! I love reading them!