You may remember Dwight Schrute, the quirky top paper salesman from NBC’s “The Office” (by the way, there is a German spin-off, called Stromberg). While the sitcom celebrated its finale back in May 2013, it is still one of the most watched shows today. And Mr Schrute is one of the audience’s favorite characters. Not only his dorky, freaky personality makes him uniquely popular, but also the emphasis on German stereotypes. From his strict sense of law and order to his upkeep of old Schrute family traditions, he proudly lives his German (Pennsylvania Dutch) heritage. Let’s take a deeper dive into all of Dwight’s Germanness throughout ALL 9 seasons of The Office. From his word use to nods to German culture and traditions. Today, we look at the German traditions Dwight brought into Dunder Mifflin, and check them on their Germanness! 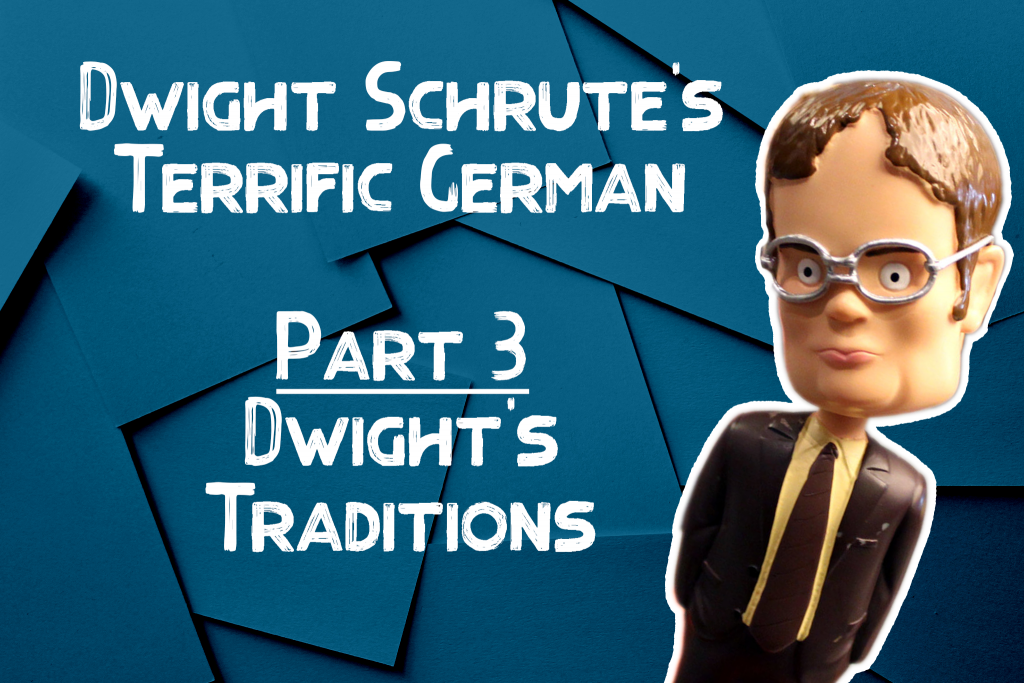 Image by author, picture of Dwight’s bobblehead by Justiny8s at Flickr.com under license CC BY 2.0.

Dwight: I inserted a listening device into the belly of the mallard. Now I can observe Jim, trap Jim, and destroy Jim, just like in the Bavarian fairytale. Only this time, the mallard skins the toad alive. And of course in this version you lose the whole veiled critique of the Kaiser thing.

While I found no video of this line, the video above shows how Jim pranks Dwight after he figured out that Dwight placed a recording device in the mallard on his desk. What is interesting about what he says is that this is just like in the Bavarian fairytale – which one?

There is, of course, the Froschkönig (The Frog Prince) by the Brüder Grimm (Grimm Brothers). However, the Brüder Grimm are not from Bavaria, and did not write a Märchen (fairytale) about a toad getting skinned by a mallard.

There is the Märchen from Südchina (Southern China), called Der Krötenkaiser (The Toad Emperor). In it, an old Kaiser (emperor) and his wife had no kids, and prayed for a child, even if it was a Kröte (toad). The wife gives birth to a toad, which they decide to raise. At some point, enemies are at the gate, and the Kaiser promises a Belohnung (reward) for whoever defeats the enemies. The Kröte rises to the cause and rides out to meet them. They were confused, seeing a Kröte as their enemy. In their confusion, the Kröte defeated them all. As a Belohnung, the Kröte could marry a Prinzessin (princess). However, the Kröte began annoying the Kaiser, and he ordered him to be killed. But the Prinzessin protested, as she claimed that the Kröte would take off his skin at night and actually is a handsome man. Not believing her, the Kaiser spied on the Prinzessin at night. And indeed, there was the Haut (skin) of the Kröte! The Kaiser donned the Haut, but could not take it off again. The handsome man took the Kaiser‘s clothes and became the new ruler, while the Kaiser became the Kröte.

This is as close a Märchen I could find that involves having a toad skinned alive, let alone by a mallard. It seems that this is complete nonsense. Though a Märchen with such violence is nothing new – just think about Red Riding Hood.

The Froschkönig also has a more violent original version than we know: instead of kissing the Frosch (frog), the Prinzessin throws the Frosch against the wall in disgust, upon which the Frosch turns into a Prinz (prince). Not quite as romantic…

Sabotage is an ancient Dutch art

Dwight: Sabotage.
Angela: What? What are you saying? Did you say sandwich?
Dwight: No. I was saying that before. Not now. Now I am saying sabotage. The ancient Dutch art of screwing up your own team.

Sabotage refers to, indeed, screwing up a situation out of protest. Of course, Dwight sees that as betrayal, as he has never been fond of people complaining about anything. However, it has nothing to do with the Dutch.

The origin of the word lies in French-speaking Belgium or France, where the workers wore sabots (French for “clogs”). In protest, they would march on their sabots, which is quite loud. An urban legend tells that they would throw the sabots into machinery, leading it to break.

While such actions also happened in Germany and the Netherlands, that is not where they originated. Not sure why this would be a Dutch art! Let me know in the comments if you know.

Dwight: [plays the recorder] That was Greensleeves. A traditional English Ballad about the beheaded Anne Boleyn. And now, a very special treat… a book my Grandmutter used to read me when I was a kid. This is a very special story, it’s called Struwwelpeter, by Heinrich Hoffman from 1864. [reading from book] The great tall tailor always comes to little girls that suck their thumbs— are you listening, Sasha? Right? And ‘ere they dream when he’s about, he takes his great sharp scissors out, and then cuts their thumbs clean off!
Michael: Dwight! Dwight!
Dwight: There’s a photo…
Michael: What the hell are you reading to them?
Dwight: These are cautionary tales for kids, my Grandmutter used to read these—
Michael: Yeah, you know what? No, no no no no. They, no. The kids don’t want to hear some weirdo book that your Nazi war criminal grandmother gave you.

We discussed Dwight’s use of the word Grandmutter last week. Here, we look at the Struwwelpeter part. Dwight narrates, as the great tailor comes to little girls that suck their thumbs to then cut them off – what is this story about?

Struwwelpeter is a collection of children’s stories that tell children what cruel and terrible things will happen if they do not behave. Read more about it here. It gets even worse – it is illustrated. Also something Dwight alludes to.

The story Dwight refers to is called Die Geschichte vom Daumenlutscher (The Story of the Thumbsucker). And it goes exactly as Dwight says: Konrad sucks his thumb, even though his mother tells him not to. She leaves, and he puts the thumb in anyway. The tailor comes in right away and cuts off both his thumbs! It is terrifying!

Next week, we will look at Dwight’s tradition-packed Pennsylvania Dutch Christmas! Subscribe to our blog to never miss a post!

Thanks to The Office for uploading many of the fragments that include the content of this post, and a huge thanks to officequotes.net, where volunteers wrote up transcripts of every single episode. It made this task much easier!

What is your favorite tradition Dwight introduced, and why? Did I miss anything? Please let me know in the comments below!