Today I’m bringing you another untranslatable word, but it’s a bit more of a ‘serious’ one this time, rather than the light-hearted ones we’re used to!

The word of today is die Vergangenheitsbewältigung. This is a very famous German word so perhaps you know about it already – or perhaps you’ve seen it somewhere before, but don’t know what it means. I’m going to break it down for you now. 🙂

What is the literal translation of die Vergangenheitsbewältigung?

It looks long and scary, but it’s actually only made up of two German words:
1. Die Vergangenheit — The past
2. Die Bewältigung — (The process of) Coming to terms with, overcoming, coping with (verb bewältigen – to cope with/overcome)

The word Vergangenheitsbewältigung therefore translates to ‘The process of coming to terms with the past’. 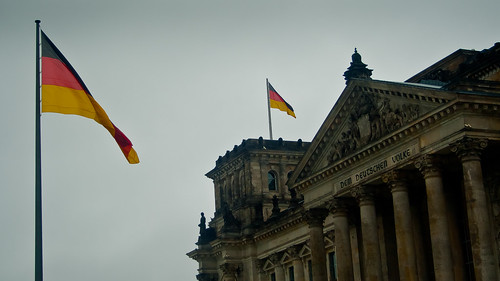 Photo: hernanpc on flickr.com under a CC license (CC BY-SA 2.0)

What does die Vergangenheitsbewältigung mean?

This word is used to describe Germany’s process of overcoming and dealing with Nationalsozialismus (National Socialism/the Nazis) and the Holocaust. It first came about following the end of WW2 in 1945, when the occupying Allied powers started trying to change the way Germans saw the world – to ‘de-Nazify’ them, as it were. There was emphasis on creating awareness of the past, rather than treating it as if it had never happened – this, people believed, was the only way to stop history from repeating itself. This word was used again in later German history, following the 1989 reunification of Germany, when describing the process of coming to terms with having East Germany under communist rule.

How would you use die Vergangenheitsbewältigung in a sentence?

You might see this word used in politics from time to time, but it’s not a word people use in casual conversation. That’s because it’s heavily loaded with meaning; it’s only really used when referring to the aforementioned periods in German history. This book, the Wörterbuch der “Vergangenheitsbewältigung”  or ‘Dictionary of coming to terms with the past’ lists the many, many German words, including this one, which either originated in Nazi Germany or are tainted by that period in time. If you’re able to read German then I recommend it, but if not here’s a post I wrote on this blog detailing a handful of these words, and why you should be cautious about using them.

What is the nearest English equivalent for die Vergangenheitsbewältigung?

With a word so specific to Germany it’s hard to find an equivalent. One similar example might be this: Swiss psychoanalyst Carl Jung coined the phrase Kollektivschuld, for which there is an English equivalent, ‘Collective German guilt’, to describe the guilt felt by Germans following the holocaust. The notion of Kollektivschuld has been studied and written about countless times throughout history and is certainly something to look up if you’re interested in this topic.

I hope this post has been interesting. I always find it interesting when a single word can open up so many thoughts, feelings and discussions amongst people. Feel free to leave your own in the comments below.