German Words Associated With Nazism Posted by Constanze on Mar 1, 2016 in Culture, Language

Have you ever said a word or phrase in all innocence, only to receive shocked gasps from those around you, and be told ‘You can’t say that!’? Or be laughed at because the word you’ve used doesn’t mean what you think it does?

Language is ever-changing, and words’ meanings can change over time. This can make it difficult for language learners to keep up. What’s even trickier is when seemingly innocent words become tainted, so unless you are aware of the history and/or politics surrounding them, this won’t be obvious at all.

This is especially true of German words associated with Nazi Germany. While it’s obvious that you shouldn’t go around calling people Nazis, there are many words and phrases that you may not even realise have Nazi associations – and should therefore be treated with caution! Here are a few examples. 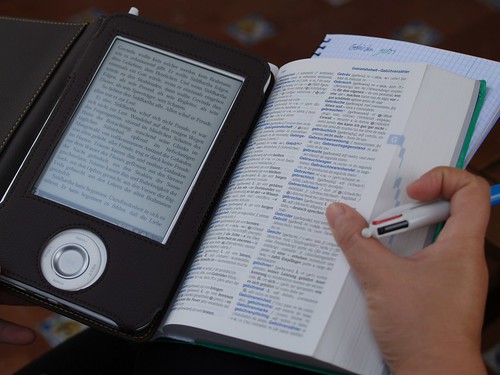 Foto: teclasorg on flickr.com under a CC license (CC by 2.0)

Some German words were changed following the war, because of their negative associations. Brausebad, the old German word for shower, was changed to Dusche because some concentration camps called their gas chambers ‘showers’ to trick prisoners into thinking they were going for a shower. The word Brausebad was even removed from the German dictionary in the late 1940s. Meanwhile, the word Fremdarbeiter (foreign/migrant worker) was changed to Gastarbeiter (literally ‘guest worker’) because the word Fremdarbeiter had too strong an association with the forced labour Hitler used during the Third Reich. The term Gastarbeiter was invented to distinguish between this and the Gastarbeiterprogramm of the 1960s & 1970s.

These are seemingly innocent words with darker meanings. Sonderbehandlung literally means ‘special treatment’, while Endlösung means ‘final solution’. While these seem like harmless words, in reality they were used by the Nazis as code words to disguise two acts of terror; the ‘special treatment’ referred to execution, while the ‘final solution’ referred to the mass murder of the Jews.

This is a tricky one because although it means ‘camp’ (Konzentrationslager – concentration camp), it also refers to a warehouse or storehouse, usually for beer. It is quite commonly used in modern German, but it is worth being aware of its negative association. Some are uneasy, for example, about the refugee camps in Germany being called ‘Flüchtlingslager’, simply because of the weight this word carries with it.

Both the phrases Mit deutschem Gruß (With German greetings), a written equivalent to Heil Hitler, and Unsere Ehre heißt Treue (Our honour is called loyalty), the slogan of the SS, are illegal to say or write in Germany and Austria.

When taboo words are used on purpose to create impact

Taboo words draw attention, so it is no wonder that they are sometimes used on purpose to create an impact. When the animal rights group PETA launched a travelling display called Holocaust On Your Plate, it was banned by Germany’s high court for its insensitive name. In general, if you ever want to use the word Holocaust (it’s the same in German – der Holocaust), in any way, prepare for a backlash.

Commonly used phrases – with a darker past

Here’s something you probably were not expecting! Ever wondered where the phrase ‘Hip Hip, Hooray’ comes from? This cheer, usually used at celebrations, is also said to have been used in Nazi Germany. It is thought to come from the Latin battle cry ‘Hieroslyma est perdita’ – Jerusalem is fallen. The shortened version, used by Germanic tribes fighting Jewish people, ‘Hep Hep Hu-raj’, translates to Jerusalem is fallen and we are on the way to paradise. ‘Hep Hep’ was also the rallying cry used in the Hep Hep Riots, the violent riots aimed at German Jews in the 19th century. At some point, however, it changed to hip hip hooray and lost this negative association.

Yes, I know – as if German weren’t hard enough! But don’t despair. If you’d like to learn more about this topic, get your hands on a copy of the Wörterbuch der Vergangenheitsbewältigung – The ‘dictionary of coming to terms with the past’. This publication examines around 1,000 German words and phrases with Nazi associations, and how they’ve changed and developed since the end of WW2.