Renting an Apartment in Germany Part 2 Posted by Larissa on May 19, 2016 in Uncategorized

After having a great response from my last post (which you can find here), I’ve decided to write another one on this topic. In this post I’ll go more into detail what happens when you find a flat, and what you can expect in the contract. 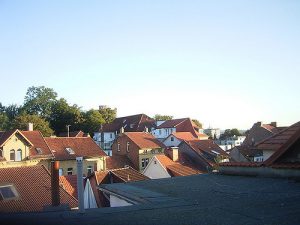 My own experience finding an apartment in Munich

If you’re looking for a place in a big city, you have to act very quickly. When my boyfriend and I found the right apartment we filled out the form (along with photocopies of our passport/ID – I suggest making a few photocopies of them so you always have them ready) and sent it on the same evening we had the viewing. We did it straight away as the deadline for applying for the flat was the next day anyway! The next day we got a call saying we got the flat and a week or two later we met up with the Estate Agent to sign the contract and to pay die Provision.

If you do find a flat that has Provision, it means you have to pay extra for the Estate Agent. How much you have to pay varies as to where you are living, cities like Berlin, Cologne and Munich are so popular that the Estate Agent fee is higher. For our flat in Munich we paid two months Kaltmiete (“cold rent”) and 19% tax, which totalled to over 1000 euros just for the Provision!

You will always have to put down a deposit on a flat. You get this back when you move out if there is no damage to the flat. The usual deposit is three months Kaltmiete. This is your rent without any Betriebskosten (utility bills). See my other post to see further details on the utility bills. You usually pay this to your landlord on the day you move in.

These come with your contract, they are just a list of what they expect you to do and not to do, for example whether you can have Haustiere (pets) or if you have to clean das Treppenhaus (the stairwell) and so on. 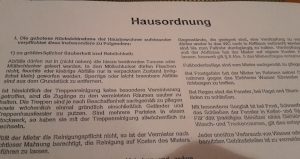 Moving out of your flat

If you are living in a flat and decide to move out, you usually have to give drei Monate Kündigungsfrist (three months notice). This means from the time you officially say you are moving out, you will still have to pay for the next three months, whether you are living there or not! As we moved into our new apartment a month after of signing the contract, I found an Untermieter (sub tenant) for my old flat for the last two months.

Thanks for reading and if you have any further questions drop me a comment below!