The World’s Largest Advent Candle Is In Germany Posted by Sten on Dec 2, 2021 in Culture, Holidays, Traditions, Travel & Geography

Advent, advent, die Kerze brennt! (Advent, advent, the candle is burning!) The four Sundays before Christmas are the four days of Advent, anticipating the birth of Christ. To mark these days, each of them gets a candle – the four Adventskerzen (f, advent candles). They can be attached to Adventskränze (m, advent wreaths) and can be found in many German homes around Christmas time, along with the ever popular Adventskalender (advent calendars) that come in all shapes and sizes. But sometimes, these Christmas traditions are literally blown out of proportion. From the largest Weihnachtsbaum (m, Christmas tree) in the world in Dortmund to the largest Adventskerze in the world – let’s talk about that today. 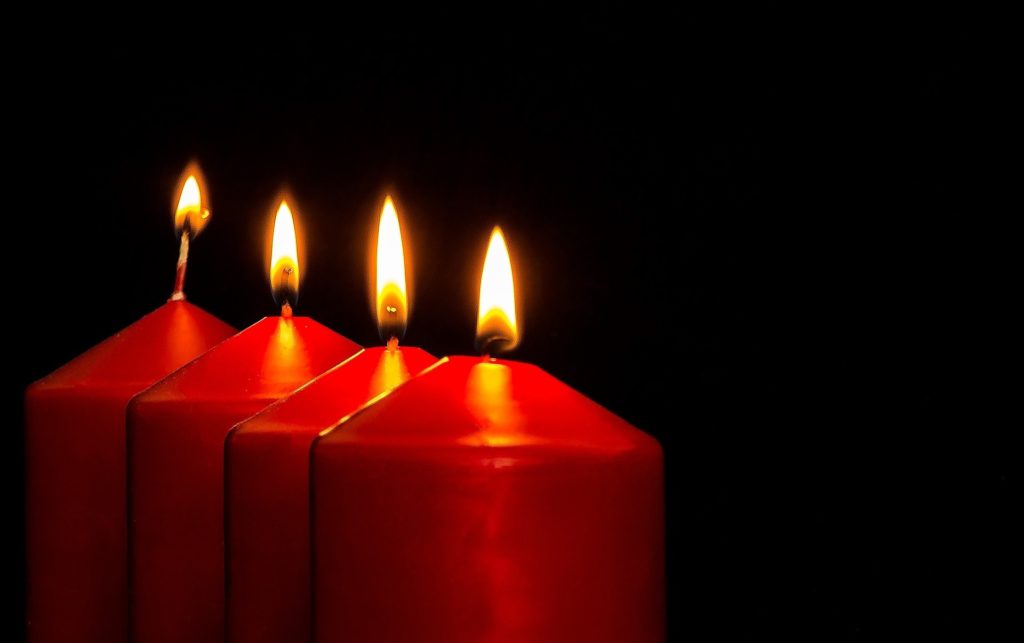 Image by Myriams-Fotos from Pixabay

The traditional Adventskerzen are normally made of Wachs (n, wax). They’re often red, which signifies the blood of Jesus. A candle is burned on each of the four Sundays before Christmas. Sometimes, people keep the candle lit for the entire advent time. If not, the candles that came before are lit again before igniting the one for that Sunday. On the fourth Sunday on or before Christmas, all four candles are therefore lit up!

But what happens if you blow such an Adventskerze out of proportion?

The malerische Altstadt (f, picturesque old town) of Schlitz in Hessen (Hesse) is once again lit up by the world’s largest Adventskerze that isn’t made of Wachs. Der Bergfried (keep) of the medieval Hinterburg (Rear Castle, the name of the castle) is wrapped in red cloth each year, with das Kerzenlicht (candlelight) on top.

After some initial difficulties with the Stoff (m, fabric), the cloth sat like a second skin around the tower, and it was turned on on November 28, the night of the first Advent.

Besides the Adventskerze, there is also a wonderful Weihnachtsmarkt (m, Christmas market) at the foot of the tower. So you can enjoy a nice hot cup of Glühwein (m, mulled wine) while marveling at the beautiful record-holding Burgfried.

Would you like to visit this Adventskerze? Are there such creative ways to reinvent traditions in your country? Let me know in the comments below!