The Advent Calender and December 24th in Germany Posted by Constanze on Dec 21, 2014 in Culture, Food, Holidays, Language, Traditions

Only 4 more days ’til Christmas, so here’s another German Christmas post! Did you know that the Advent calendar chocolate you’re happily chomping away on is a German invention? Yes, along with the Weihnachtsbaum (Christmas tree), the Adventskalender is something else you can thank the Germans for. As the big day draws nearer, today I’d like to talk a bit about the Adventskalender, December 24th, and what happens in Germany over Christmas.

Now, here’s a photo of a German advent calendar. Notice anything odd? 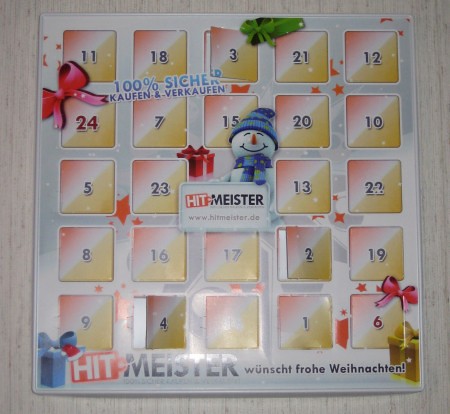 Photo by fruetel on flickr.com under CC BY-SA 2.0

Yes, that’s right – there are only 24 doors on a German Adventskalender. In Germany, Christmas is celebrated on December 24th, not December 25th. That’s because December 24th marks the last day of Advent. This is not unique to Germany, however: Austria, Poland, Slovakia, Denmark and Estonia are just some countries that have the same tradition.

Advent calendars date back to the 1800s, when German Protestants used various methods to count down from the start of Advent to Christmas. Techniques used included: 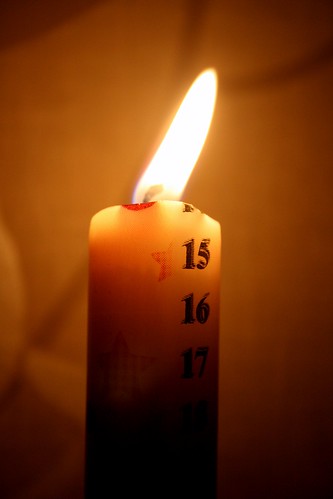 A German called Gerhard Lang is credited with printing the first Advent calendar for sale, even though the tradition had been around for a long time beforehand.

This Advent calendar consisted of little, religious pictures which were to be attached to a piece of cardboard – one for each day. Later on they developed to have the Türen (doors) and Schokolade (chocolate) we are familiar with today.

So what happens on December 24th and 25th in Germany?

Christmas Eve is called Heiliger Abend or Heilige Nacht (‘Holy Evening’ or ‘Holy Night’) in German. Most businesses, including banks, post offices etc. close early on Heiliger Abend, to allow Germans to start their celebrations and travel to their family homes.

Food
Germans usually eat a huge Christmas meal on both December 24th and December 25th – though some families make one feast bigger than the other. A traditional German Christmas meal might include the following: Weihnachtskarpfen (‘Christmas carp’), Kartoffelsalat (potato salad), Gurkensalat (cucumber salad), Weihnachtsgans (‘Christmas goose’), Kraut (cabbage), Knödel (dumplings). For sweet treats and dessert there is Weihnachtsstollen (Christmas Stollen), Lebkuchen (gingerbread, sometimes covered in chocolate), Marzipan (marzipan), and other Kekse und Süßigkeiten (biscuits and sweets) known as Vanillekipferl, Zimtsterne and Kokosmakronen, to name a few. Glühwein (mulled wine) is a very popular German drink at Christmas time, but most alcoholic beverages are common. 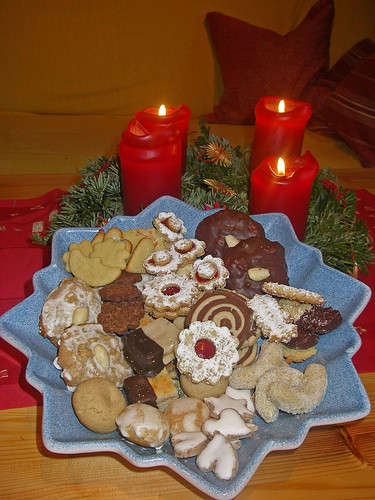 A variety of German Christmas Kekse, including Lebkuchen, Vanillekipferl, and Zimtsterne. Photo by jseidl2011 on flickr.com under CC BY-SA 2.0

Dickbauch
Dickbauch means “fat stomach”. This word refers to a German myth that those who do not eat enough on Christmas eve are visited during the night by demons. To prevent it, you must have a Dickbauch. I don’t think any of us need another reason to stuff our faces at Christmas time, but as far as excuses go, this is a pretty good one!

Presents
Children open presents on Christmas eve. Apparently, this tradition began in the 16th century with Martin Luther, who wanted to steer the celebrations away from December 6th (St. Nicholas Day), when presents were traditionally exchanged in Catholic families. He believed it was blasphemy to worship a saint rather than Christ himself, so he started the tradition of exchanging gifts on Heiliger Abend in honour of Christ. Traditionally, presents are put underneath the tree while children are out of the room. Some families also celebrate the Christkind, which you can read more about here.

Time for Church, family, and resting
Christmas day is for going to Die Kirche (Church), visiting friends and family, staying at home, resting, reflecting – and eating even more food.

Unlike in England, where December 24th is a normal, working day for most people, December 25th is Christmas Day and December 26th involves a mad rush to the Boxing Day sales, Germany treats these three days as a holiday. In other words, hardly anything is open at this time. For that reason, it is wise to stock up on food on or before 23rd, because most supermarkets in Germany are closed on 24th, 25th AND 26th December!

This’ll probably be my last post before Christmas, so I’d like to say thank you to everyone who’s been reading and commenting on my posts for the past half year. It’s been a pleasure writing for you all, and I hope you’ve enjoyed my posts and learnt something from them!