Fräulein Veronika Dankeschön Posted by Constanze on Apr 10, 2015 in Uncategorized

One of my first posts on this blog was about the Trümmerfrauen, the post-war German women who cleaned up their war-torn country while their men were away or missing. The way these women stepped out of their stereotypical roles as housewives and mothers to do what was seen as men’s work is still talked about as a turning point in women’s history.

But not all women took on the role of Trümmerfrau during this post-war period. A name was also given to a different type of post-war German woman: The Fräulein Veronika Dankeschön.

In simple terms, the Veronika Dankeschön was a woman who used sex to get what she needed. While the Trümmerfrau made money for her family through doing manual work re-building and cleaning up her city, Veronika Dankeschön slept with allied American soldiers in exchange for money, food and cigarettes. Another term used for this type of woman was an Ami-Liebchen (‘American lover’), which was practically synonymous with Dirne, Hure, Straßenmädchen, Prostituierte (all words for prostitute). Not every woman who went out with an American soldier was a Veronika Dankeschön, but any woman who did was treated with caution.

Veronika is a German female name, while Dankeschön means ‘thank you very much’. Veronika Dankeschön was purposefully given this name because of its initials VD, which also stands for venereal disease (Die Geschlechtskrankheit in German). That was because these women were known to spread sexually transmitted diseases. There was a widespread epidemic of VD between German women and American soldiers in 1945, which American government officials were, unsurprisingly, not happy about. They believed that, far worse than being immoral, these ‘Veronika Dankeschöns’ were undermining the soldiers and the entire American victory by spreading venereal disease to them!

As a result, American officials launched a media campaign to try to prevent prostitution and German-American sexual relations.

Here are a few examples of the poster campaign:

Photo by headovmetal on flickr.com under CC BY 2.0 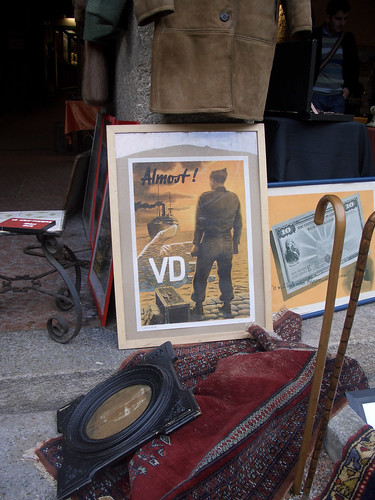 Photo by currybet on flickr.com under CC BY-SA 2.0