Die Trümmerfrauen: The Rubble Women Posted by Constanze on Jun 17, 2014 in History

There is this stereotype that German women are big, strong, and super-efficient. My husband sometimes teases me when I do some heavy lifting, saying things like: “Yeah, you’re a real German woman!”, or when he talks about my work ethic: “Well, of course you’re hard working – you’re German!” I have to admit, I never really understood what he was talking about, or where this stereotype had come from. Of course, I knew that this was how people pictured German women, but why? One day I probably questioned it, because he said to me, “Did you not know that German women rebuilt Germany after the war?”

It had never occurred to me that this might be the reason for the stereotype, so I decided to read up on this particular part of German history. Here is the result: a very brief history lesson for you (and me!) on women in post-war Germany.

At the end of the war

By the end of World War 2, Germany was quite literally in ruins. What were once major cities had been reduced to piles of rubble; four million homes and 80% of the main cities’ historic buildings had all been destroyed. This was the time to rebuild the country – but there were hardly any men to do it. 15 million German men were missing as a result of war, while many others were badly injured, mentally scarred, had been killed, or taken as prisoners of war. So what was the solution? To get the women to do it!

Up until that point, the role of German women was firmly in the home, and heavily centred around the 3 Ks: Kirche (church), Kinder (children), and Küche (kitchen). Their role was a typically traditional one based around being a wife and mother. However, as there was such a great shortage of men after the war, it fell to the women to carry out the huge task of clearing up the rubble of the bombed streets. The volume of rubble was immense: an estimated 400 million cubic metres in (what would become) West Germany alone.

Women aged between 15 and 50 were called on to work, and spent their days clearing the bricks and rubble from the streets, and collecting and cleaning anything they could salvage for the later construction of new buildings. They used only their hands and some basic tools, such as spades and hammers (although sometimes not even those were available). They received more rations doing this work than they would have if they’d have stayed home and remained a Hausfrau (housewife). They had no choice: They had children and elderly relatives to care for, and they had to make sure they had enough food rations for their families. So, just like that, women were suddenly carrying out the manual labour that was previously considered men’s work.

It is said that the women of Germany held the country together for those initial post-war years.

These women were called Die Trümmerfrauen: ‘The Rubble Women‘. Today, there are many monuments in their memory all over Germany. They look like this: 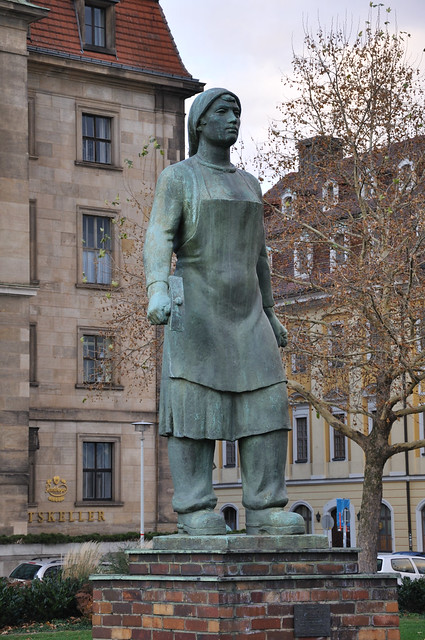 Photo by vxla on Flickr.com is licensed under CC BY 2.0

When the men returned, some women went back to their traditional roles as wives and mothers. Others resisted this, and continued to work. Interestingly, divorce rates in Germany went up after the war, and it is speculated that this was a result of the shift in traditional family roles. But regardless of its aftermath, it is undeniable that the emergence of the Trümmerfrauen represented a huge leap forward for women in post-war Germany. They are remembered today as the people who rebuilt their war-torn country.

Now, I am not really a fan of stereotyping. But having learnt about the Trümmerfrauen, I understand why people sometimes make the comments that they do, and I don’t really mind them. If people want to stereotype me as hard-working, strong and efficient purely because I am of German descent, then I am very happy to let them do that! After all, there are far worse things to be called!

However, I am sure that the Trümmerfrauen can’t be the only reason for this stereotype. Do you know of any other reasons why German women (or Germans in general) are stereotyped as strong, efficient, industrious, hard-working, etc? I may do another post on that in the future!

A note on spelling:

The word Trümmerfrau has an Umlaut over the u (ü). If you cannot use this symbol, you may substitute the ‘u’ in it for ‘ue’, which makes the word ‘Truemmerfrau’. This is considered correct, unlike ‘Trummerfrau’, which is incorrect. This rule actually applies to all vowels with Umlauts over them!

And finally, here are some web pages on this topic that you may find interesting:

One -“Helene Lohe, my Trümmerfrau” – a personal account of a Trümmerfrau from www.laenvie.com

Three – “The Women Who Raised the Rubble” – Article by Titus Chalk