Now that the weather is brightening up I went for lunch in a typical Bavarian beer garden, which gave me the idea to share with you some beer garden tips and why it’s so popular to go in Bavaria! 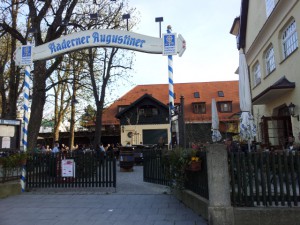 There are many Augustiner beer gardens around Munich! This one I went to today. Own photo.

One of the great things in der Biergarten (the beer garden) is that it is erlaubt (allowed) to bring your own food, so you could bring an entire picnic with you and no one would mind! However you do have to buy die Getränke (the drinks) at the beer garden, which is fair enough anyway seeing as it is a beer garden after all. 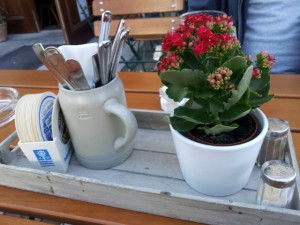 It is very traditional to see Kastanienbäume (chestnut trees) in a beer garden, I’m not entirely sure what the reason is to this but it makes sense as they are very big and therefore give plenty of shade on a hot summers day.

The biggest beer garden in Munich is by Hirschgarten (“Deer garden”) with around 8000 seats! I was there last year to watch the Fussballweltmeisterschaft (football world cup) which was a great experience. Germany started public viewings in beer gardens of the world cup in 2006 and since then they show not only the world cup, but also other big football matches around the year.

On Feiertagen (bank/public holidays) you can often find live bands playing in beer gardens as well, which makes the whole stimmung (atmosphere/mood) even better as usual.

Here’s some helpful vocabulary and sentences of what you might see in a typical Bavarian menu:

Obazda/Obatzter/Obatzda           This is a Bavarian speciality which is like a cheese spread, often eaten with Brezn. It contains camembert, butter, ground red pepper, cumin and onion. 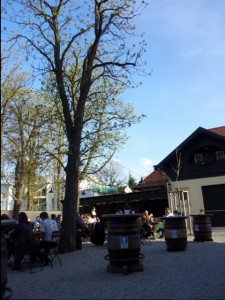 A chestnut tree in Spring with blue skies. Own photo.

Have you ever been to a German beer garden?