As Easy As “Pióg”: How To Say Kinds of Pies in Irish Posted by róislín on Nov 12, 2011 in Irish Language

In the end, you’ll need to be your own judge as to whether this is really “as easy as pie,” but here at least are some tips for naming different types of pies.  And as two holiday seasons approach, Lá Altaithe (Meiriceá) and An Nollaig, what tastier topic?

So let’s look at the terms for five kinds of pie.  Keep in mind that in both Irish and British cooking,  “pie” is at least equally likely to refer to a meat or main-course pie as to a fruit or dessert pie.  So we’ll include a couple of types of pie you wouldn’t likely find in the US.

As usual in Irish, the main noun in the phrase comes first, so we’ll start with “pióg” in each case, followed by the type of pie:

1)      pióg + úll: this one is very straightforward (no changes!), pióg úll, because the word “úll,” describing the type of pie, begins with a vowel (so can’t take the séimhiú that might otherwise apply).  And we don’t really have to worry about the tuiseal ginideach since “úll” means both “an apple” and “of apples.”  If the apple pie is served hot, it’s “pióg úll the,” with the word “te” (warm, hot) changing to “the” [pronounced “heh” since the “t” is silent; the vowel sound is like the short “e” of English “hen” or “help”].  The adjective “te” gets lenited because the noun “pióg” is feminine, much like you’d say “pióg mhór” or “pióg bheag.”

3)      pióg + iasc: pióg éisc.  Can’t say this has ever been very typical i mo chistin féin, but if we’re going to serve it or say it, the word “iasc” ([EE-usk] fish) changes to “éisc” ([ayshk] of fish).  I’m not sure I’ve actually ever eaten pióg éisc.  Cad fútsa?  Sets me wondering, though, what would the Irish be for “starry-gazy” pie (I know, wrong Celts, since starry-gazy pie is actually Cornish, but the question still remains – would one call it “pióg philséar,” since that’s the type of fish involved, or would one say “pióg réaltóireachta,” since “réaltóireacht” means “star-gazing?”  An oiread sin ceisteanna, chomh beag leis an am!)

4)      pióg + stéig + duán: pióg stéige agus duáin.  The “st-“ cluster never gets lenited, so the first part of “stéig” ([shtayg], steak) stays the same, but the word does pick up the “-e” ending, like “líomóid” did (becoming “líomóide”), since they are both sa tuiseal ginideach.  “Duán” [kidney] is also sa tuiseal ginideach but the ending is formed differently since it belongs to a different category of noun (first declension, as opposed to “líomóid” and “stéig,” which are second declension).  “Duáin,” with the letter “i” inserted, means “of kidney.”  Not a typical example of bia Lá Altaithe, is dócha, but a good one to represent the meat pie aspect of Irish (and British) cooking.  In American English, a meat dish baked with a crust is usually called a “pot pie,” to distinguish it from “dessert” pies.

So, sin cúig phióg daoibh.  Ar ndóigh, tá na céadta cineál ann, barraíocht le bheith ag caint fúthu go léir anseo.  The key things to remember for describing them are that the word following “pióg” is usually lenited, because “pióg” is a feminine noun, and that the word describing the contents is usually in the genitive case (an tuiseal ginideach), since the pie is considered to be “of fish,” “of steak,” giving us “éisc” instead of “iasc,” and “stéige” instead of “stéig,” for example.

And in case you’re interested in “pi” of the sórt do-ite, i.e. the inedible type (π), the Irish word is simply “pí.”  It does have a plural, “píonna,” but I must admit that my relationship to “pi” is pretty rusty, and I’d be hard pressed to discuss the plurality of pi, even in English.  But should that topic come up i do chomhráite féin, there you have it. 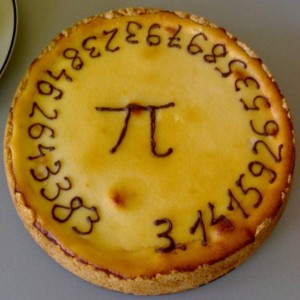 As for “piecharts,” one might think we’d use the full word “pióg,” as part of the compound, since, after all, “pie” is the basis of the term, but in fact, in Irish, the word is simply “píchairt” (pl: píchairteacha).  Perhaps because a final “-g” followed directly by the lenited “-ch” would be unusual, even in Irish.