Dathanna Dhuilleoga an Fhómhair: The Colors of the Autumn Leaves (in Irish) Posted by róislín on Nov 6, 2017 in Irish Language 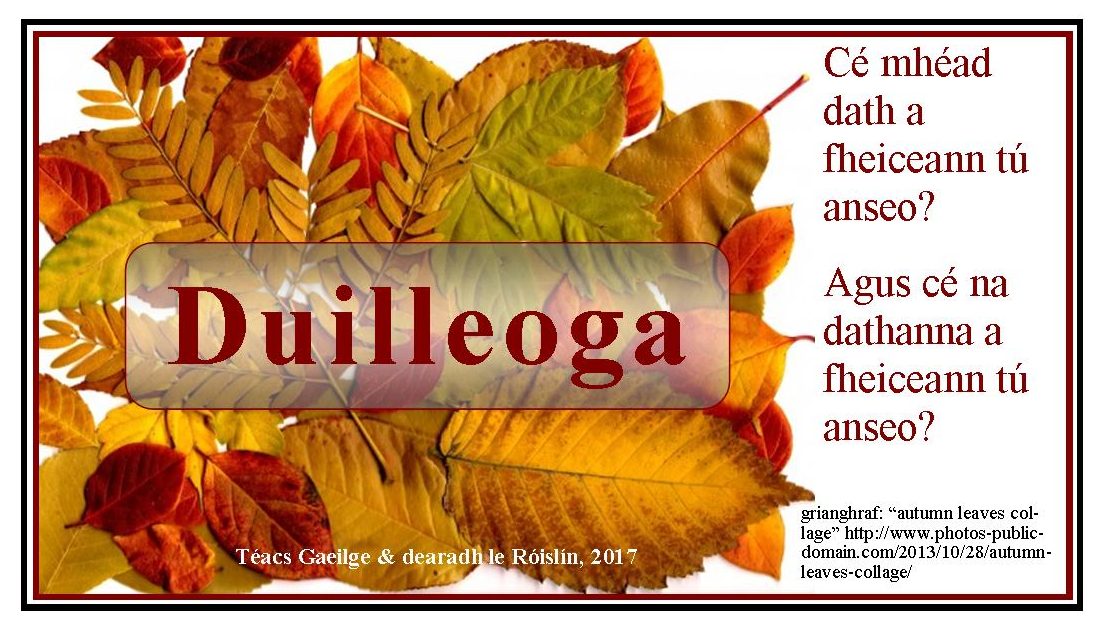 As you can see from the graphic above, today’s topics will be dathanna agus duilleoga.

Let’s start with the word for “color” itself (dath):

an dath, the color

an datha, of the color

For pronunciation, remember the “t” is silent, so the vowel sound is similar to English “Ah!” or what the otairinealaraingeolaí (ear, nose, and throat doctor) asks you to do so your throat naturally opens up.   Also, for “na ndathanna,” remember the “d” sound drops out, so we have, roughly, “nuh NAH-hunna.”

A very typical question with this word is

“Cén dath atá air / uirthi / orthu (srl.)?, What color is it?  Lit. “What color is on it/them?”  For this we typically use “air” for a male animal (like “madra”), or for a noun that’s grammatically masculine (like “bosca”).  It also tends to be used if we don’t know the gender of a noun (which happens often enough as most of us are learning).

Cén dath atá uirthi? would be for a female animal (like “cearc”) or a noun that is grammatically feminine (like “cathaoir” or “leaba”).

If we put the actual noun in the sentence, then we just use the form “ar” (on):

The word for “leaf” is “duilleog,” and its forms  are:

na nduilleog, of the leaves (An maith leat dathanna na nduilleog sin?).  Note that the plural ending “-a” drops off for this form, which is “an tuiseal ginideach.”

And here some of the colors that we can see in the photograph above:

That makes nine colors (naoi ndath), to answer the other question in the graphic.

Perhaps another interesting question for a future blog would be, “Cén sórt crann a fhásann i do cheantar?” (What kind of trees grow in your area?).  That might also give us an eventual topic of talking about different shapes of leaves and saying phrases like “This is a leaf of an oak tree / of a maple tree, etc.” It could also let us compare varieties that are evergreen (síorghlas) with those that are deciduous (duillsilteach, lit. something like “leaf-shedding,” from “duill-” a prefix meaning “leaf” and “silteach,” hanging, flowing, dripping, running).  The compound word can also be spelled “duilsilteach.”  Never a … um … dare I say it  … “duille” moment, when it comes to learning Irish!  Tá ábhair shuimiúla go leor ann!   “Duille,” btw, is just another form of the word “leaf.”  Go dtí an chéad uair eile, slán go fóill — Róislín

PS: To break down the title of the blog:

“Dathanna” triggers lenition of “duilleoga” because we have a double genitive coming up.  “Duilleoga” keeps the plural ending because it’s the first element in the double genitive phrase, and “Fómhar” goes completely into the genitive, becoming “an Fhómhair,” with the “fh” silent and the “mh” like a “wuh” sound.  A classic example of this structure is in Ó Siadhail’s Learning Irish (Chap. 25, point 2): “geata theach an bhúisteara” (the gate of the house of the butcher).