On The Pig’s Back vs. On the (implied) Hog’s Back: An Irish Expression Exegetically Examined Posted by róislín on Aug 31, 2016 in Irish Language

A recent query about the Irish expression “on the pig’s back” prompted me to go back to the original blogpost on that topic in this series (nasc thíos, agus GRMA, a Jacqueline).   Apparently over the years (and long before the beginning of this blog in 2009), many people have wondered whether the Irish and Hiberno-English expression “on the pig’s back” (ar muin na muice, ar mhuin na muice, ar dhroim na muice) and the English expression “high on the hog” are related.  That’s a question that I don’t have the answer to but an investigation of the phrases should, minimally, prove interesting.   So, on to our main topic at hand (or should I say, “at hoof,” referring to a “crúb muice“?). 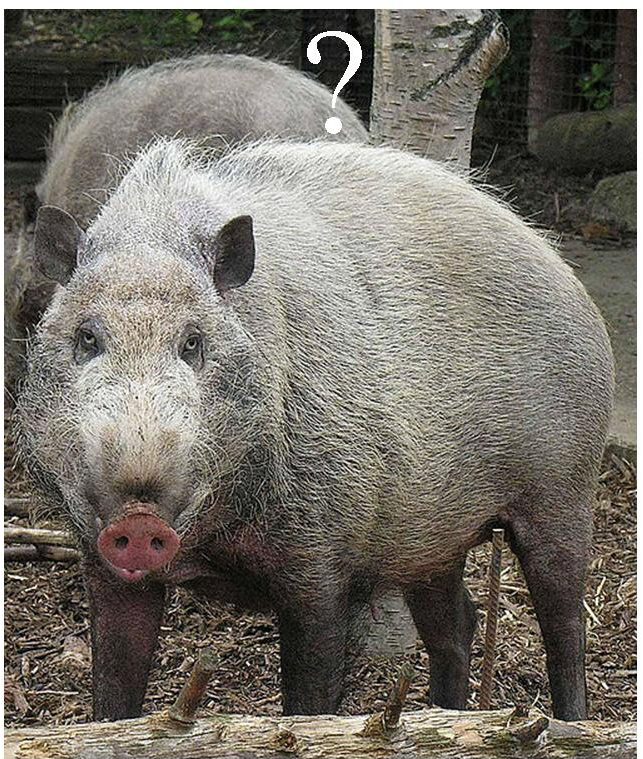 “On the pig’s back” basically means “doing really well.” There are at least two ways to say this in Irish:

“Droim” has several other meanings, mostly body-related or bodylike by analogy: crest, instep (droim coise), spine, or ridge of land (since it resembles a spine).

“Muin,” in my experience, is used just for animals, especially horses as in “ar muin capaill” / “ar mhuin capaill” (on horseback), and obviously, in today’s context, for pigs.

As for how to say “high on the hog” in Irish, the usual equivalent has nothing to do with hogs.  It’s “saol na bhfuíoll” [seel nuh weel, catchy-sounding, nach ea?].  Literally, it means “the life of the surplus” and it is also considered equivalent to living “off the fat of the land.”  If we were to approach “high on the hog” literally (generally not recommended for metaphors and idiomatic expressions), we’d use some combination of “ard” (high) + ar an (on the) + muc OR (g)collach coillte (depending on whether you consider “hog” to be simply “pig” in general or an, umm, certain type of boar” (that’s with “coillte,” past participle of “coill,” although the “collach” probably doesn’t care what kind of participle it is, since that “part” is now past!).

So why did I say, “implied” hog’s back in the title of this blogpost?  Bhuel, I guess if you are somehow “high on the hog,” you’d be on its back, not it’s belly.  Pork belly — now that’s ábhar eile ar fad!  But somehow, “high on the hog” doesn’t create such a visual image for me as “on the pig’s back” does.  Maybe “high on the hog” seems even more metaphorical, and less bodylike.

Given the issues of distinguishing pigs from hogs, perhaps sometime in the future we’ll look more into the Irish terms these categories of suids (mucra).  Tricky thing is there’s some semantic overlap (“hog” can sometimes simply mean “pig”), but otherwise we tend to separate out the words fairly specifically, at least in English.  So we have:

Hogwort (the plant Croton capitatus), not, afaik, *Pigwort (except as a misinterpretation of “pigweed” or “figwort” — sometimes it seems “anything goes,” as far as language possibilities are concerned)

Pigs in pokes, but not “*hogs in pokes,” which would lose the catchy alliteration.  The Irish equivalent of “Don’t buy a pig in a poke,” by the way, also features alliteration (of the letter “m,” not “p” as in the English).  But, as a lover of alliteration, I’ll take the combo in any language.   Anyway, the Irish is “Ná ceannaigh muc i mála,” lit. Don’t buy a pig in a bag (mála), with “bag” being the counterpart of the English version’s “poke” (i.e. a small sack or detached pocket, like the one that Lucy Locket lost and Kitty Fisher found).  Actually, this brings up an interesting question for any readers here who know languages other than Irish and English.  Does this phrase exist in your language?  And if so, is it alliterative?

Curiously though, both “pig-eyed” and “hog-eyed” exist, at least in English.  I’ll have to check out the Irish in the future.  And similarly, apparently we can have both “pig-calling contests” and “hog-calling contests,” though prior to researching this blogpost, I would have sworn we always say “hog-calling.”  Oh well.  Ach is ábhair shuimiúla do bhlagmhíreanna eile iad seo.  Cineálacha súl — ábhar an-suimiúil!  Agus “muc” vs. “collach coillte” (one of the definitions of “hog”), sin ábhar suimiúil eile, agus b’fhéidir, don chollach é féin, beagán pianmhar.  And in case you’re wondering (how often Irish makes us wonder, wonder, wonder, wonder who, who wrote the rules of Irish?), that’s not “coillte” as in “forests.”  It’s the other “coillte.”  Look it up, if you don’t already know the “Tá mo mhadra …” song.

So, why write all this, if I don’t have the answer to the original question — is “on the pig’s back” related to “high on the hog”? Bhuel, as someone once said (I think), it’s not so much getting an answer as it is gathering information along the way.  I hope you found the query interesting, even if the details were a bit quagmirish.  In fact, trying to answer it, and many other word/phrase origin questions, makes me feel a bit like a “hog on ice,” another curious expression.  But an examination of that phrase will have to wait for another blogpost.  There is an Irish phrase for “skittering” (déanamh sciotairín) but it appears to have more to do with “Ducks and Drakes” rather than hogs skittering about on ice.  Well, anyway, ducks, drakes, hogs, pigs — animal metaphors rule, don’t they?

P.S. In case you’re wondering, I’m wondering too — why do all the sources I find say “crúb muice,” instead of “crúb mhuice“?  This seems to defy the “scian phóca” rule (when a noun functions as an adjective and describes another noun, specifically a feminine singular one, as “pocket” does to “knife” in “scian phóca“).  An freagra ag duine ar bith?  Seachas an gnáthfhreagra [pronounce that as: GNAW-RAG-ruh, btw, in case you’re new to Irish pronunciation — the initial “g” is pronounced, the “f” in the middle is not], the “gnáthfhreagra” being “Sin mar atá,” or, to quote Tevye, “Traidisiún!”  That’s assuming Tevye could speak and sing Irish.  What he really said was, “Tradition!” and if we unsuspend our disbelief, he should in theory have been saying “Traditsye,” at least according to Word Hippo’s entry for the Yiddish for “tradition.”

P.P.S.  And a special note to “Youngmin” of Korea, who was learning Irish at least a few years back.  Remember when we discussed the “pig in the poke” proverb, back in Davenport?  If you’re still reading this blog, I hope your study of Irish is going well.

Nasc: Ar Dhroim (Ar Muin) na Muice: Not Quite The Same as “High on the Hog”Posted by róislín on May 5, 2012 in Irish Language