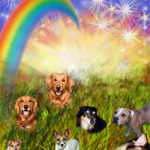 Here’s a little further background on some of the words used in “Fáilte na Madraí roimh Lennox” (https://blogs.transparent.com/irish/failte-na-madrai-roimh-lennox-the-dogs-welcome-to-lennox/). A full gluais and/or aistriúchán may be “ar an bhfeadh mhór” (in the offing).

We’ll start with a key term in the blog, Droichead an Tuar Ceatha, which will actually give us three main words to explore (droichead, tuar, and cith/ceatha), and then we’ll see how much am/spás is left  to continue the gluais.

First, let’s briefly consider the origin of the term in English, “The Rainbow Bridge,” in the context of pet loss.  It dates to ca. 1990-92.  It’s hard to be absolute about an t-údar and an dáta since the poem and concept got so quickly swooped up into the Idirlíon, which was then fairly new for most users.  Three possible original authors are Paul C. Dahm, William N. Britton, and Dr. Wallace Sife; in addition, Canadian author Margaret Marshall Saunders (1861-1947) pioneered the coincheap in Beautiful Joe’s Paradise (1902).  Total hits for “Rainbow Bridge animal” as of today’s blog: 543,000 (total hits for “Rainbow Bridge,” approximately 9,310,000, which  include the Rainbow Bridge at Niagara Falls and other uses).  So it’s a widely used term.

tuar [TOO-ur] Two syllables, though very smoothly glided together.  The vowel sound is not like “guar gum” or “guard” or Spanish “Juan.”

On to meanings, and they’re all basic enough:

1) droichead, bridge, pl. droichid.  You might recognize this one from a variety of place names in Ireland, most notably Drogheda, pronounced in Hiberno-English roughly as “DRAH-hud-duh,” with a slight guttural (throaty) rumbling for the “-gh-,” depending on the speaker.  What about that final “-a” in “Drogheda,” since it’s not part of “droichead” as such?  It’s the shortened anglicized form of “átha” ([AW-huh], “of a ford,” but you knew that anyway, from Baile Átha Cliath, right?  Your own private “átha moment,” nach é?).  So the full place name in Irish is Droichead Átha (bridge of the ford).

Hmm, why do we have a bridge if the river is/was fordable?  Is there still a part of the river that would be considered fordable?  Seems unlikely give the town’s growth, ach is fada ó bhí mé ann.  Duine ar bith?

Welsh learners might be relieved that their word for “bridge,” which is “pont,” is so conveniently related to Latin (pons) and all its offspring (puente, etc.).  The origin of the word “droichead,” on the other hand, is pretty murky.  In Old Irish, we can safely say it’s “drochet,” but it has no connection to the more widely known “pons/pontis” family.  “Droichead” may be related to “drŭkolŭ” (a cudgel; Slavóinis Eaglaiseach), and if that didn’t exactly press your “Sure!-I-recognize-that-word!” button, it may also be related to “trough” (an focal Béarla), and, hmm, hence to “trug,” I wonder.  The key connecting point is that all were originally made of wood.

2) an: most readers will, by now, recognize an t-alt (cinnte) as “an.”  Here I’ll simply provide the reminder that in the phrase, “Droichead an Tuar Ceatha,” the word “an” (the) covers both instances of “the” in English (the Bridge of the Rainbow), just as “hata an chailín” means “the hat of the girl” and “bean an fhir rua” means “the wife (or “woman”) of the red-haired man.”

3) tuar: “tuar” doesn’t mean “bow,” so “tuar ceatha” isn’t exactly “bow of rain” (although “bogha báistí,” a synonym, is, literally, “bow of rain.”).  “Tuar,” in this phrase, means “sign” or “omen,” so the reference is to the effect of the rain, which causes the “bow,” not to the shape of the “omen” or “sign” itself.  I usually think of an “omen” as coming before the event, but, clearly, that isn’t actually how rainbows work.  I can live with that.

4) cith: the basic meaning is “a shower” and it gives us a variety of interesting phrases, from the straightforward (cith cloch sneachta) and the practical (“cithfholcadh a ghlacadh,” to take a shower) to the metaphoric “Aon chith amháin a d’fhliuch iad uile” (lit. It’s just one shower that wetted them, but implying the same thing as the traditional English saying, “They are all tarred with the same brush”).  Pronunciation?  “ayn hyih uh-WAW-in uh djlukh EE-ud IL-luh”; note that silent “-fh-“.

The genitive case of “cith” is “ceatha” (of a shower) as we have in today’s phrase (tuar ceatha).  The vowel change also occurs in the plural (ceathanna, showers).

So, the whole phrase, in literal sequence, is “(the) bridge of the sign of shower.”

P.S. How to pronounce “páirtghluais“?  Not so bad, when you remember it’s “páirt” as a prefix and “gluais” lenited: PAWRTCH- γLOO-ish.  The “gh” part is the voiced velar fricative, previously discussed in several other blogs in this series, like https://blogs.transparent.com/irish/saying-i-love-you-in-irish/ (whose subtitle is “and minding your velar fricatives”).  The /γ/ is the “gamma” sign, borrowed from Greek for the International Phonetic Alphabet, and I can’t seem to make it rest on the baseline, as I would like it to, so please don’t read it as a “y.”