That’s The Way The Easter Bunny Goes – Cluas i ndiaidh Cluaise (using the Irish verb “to eat”)! Posted by róislín on Apr 9, 2010 in Irish Language 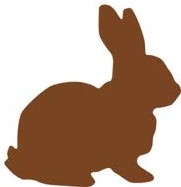 Some of you might still have your chocolate Easter bunnies, or part of them left.  To celebrate the gradual eating of such chocolate bunnies, which usually starts with the cluas (ear), let’s continue our relative clause series with the irregular verb “ith” (eat).  As you’ll see, some forms of “ith” look regular, such as “ithim” (I eat) and “d’ith mé” (I ate).  You’ll see the irregular stem (íos-) in the future-tense form, though (íosfaidh mé / I will eat).

If we were including the oft-dreaded modh coinníollach in this series, you’d also see the irregular stem there (d’íosfainn, I would eat), but the good news is that we haven’t been including the conditional mood in this series so far, so I don’t see any reason to start now!  Our main purpose, remember, is to contrast how the direct relative clauses use séimhiú (b->bh, srl.) and the indirect relative clauses use urú (b->mb, srl.).  Since today’s verb (ith) begins with a vowel, we won’t have séimhiú as such, but we will introduce the particles “d’” and “ar” for the past-tense examples.  We’ll also have eclipsis of the vowel by prefixing “n-” as in “a n-itheann.”

So here goes, and so goes the coinín seacláide (chocolate bunny)!  We’ll start with the simple sentences (no relative clause), then do the direct relative, and then the indirect, for present, past, and future.  We’ll also go partly through the anatomy of chocolate rabbits!

Direct relative: Seo é an páiste a itheann cluas eile an choinín seacláide (This is the child who eats the other ear of the chocolate rabbit).

Indirect: Seo é an páiste ar ith a dheartháir cosa deiridh an choinín seacláide (This is the child whose brother ate the hind legs of the chocolate rabbit). NB as above, with “whose brother” becoming “a deartháir” if the first child is a girl.  The word “é” would also change to “í” in that case.

“A thiarcais!” you might exclaim, checking out that last sentence, which actually has three relative clauses (not unusual for an Irish sentence).  Here’s the translation:

This is the child whose cousin will eat the crumbs of chocolate that are left in the box that the chocolate rabbit was in.

One last point you may have noticed: “the ear of the chocolate bunny” is “cluas an choinín seacláide,” with séimhiú on the word “coinín,” to indicate possession.   Also, the definite article “an” in the middle of the phrase applies to both “ear” and “bunny.”  In Irish, the definite article is only used once per phrase showing possession (unlike English, which can say “the ear of the bunny”).  And yes, at some point we could discuss why English has two systems for showing possession (the ear of the bunny, the bunny’s ear) and how Irish simply (!) uses an tuiseal ginideach for both structures, but, mh’anam, sin ábhar blag eile!

P.S.  Perhaps if Mike Tyson could have read this blog in advance of the famous “Bite Fight,” all the hullabaloo about that ear-biting incident could have been avoided.  Surely “cluas an choinín seacláide” would have been a better choice!