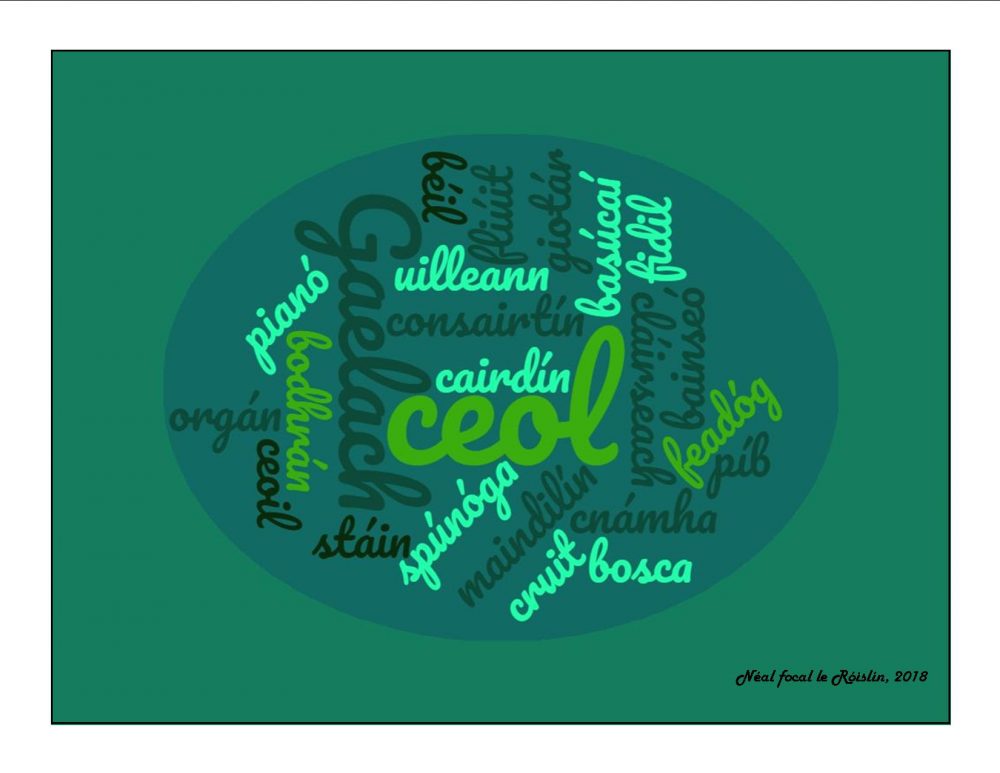 Today, we’ll just practice using the word “the” with these words, instead of practicing with phrases like “ag seinm” (playing), ag bualadh” (playing, beating, hitting), or “ag casadh” (playing, but also means turning, twisting, etc. — so that would be perfect for the hurdaí-gurdaí, which I guess I’ll have to introduce next time.  That and the orgán bairille!).   From an English language perspective, adding “the” might seem like a, well, a cakewalk, but in Irish it is more challenging.

If you already know a language like Spanish or French, you know that grammatical gender is a major feature of the language, and that you always have to decide (or just intuitively know) whether to say “el” or “la” or “le” or “la.”  Spanish also has specific feminine plural and masculine plural forms.  German goes even further, with three genders (marked by “der,” “die,” and “das“), plus specific rules for plurals.

With Irish, the situation is almost in reverse, but grammatical gender is still very important.  In Irish, the definite article is either “an” or “na,” but unlike those other languages, “an” is used for both masculine and feminine nouns (an fear, the man; an bhean, the woman).  “Na” (the plural form) is also used for both masculine and feminine nouns (na fir, the men; na mná, the women).  For today’s purposes, we won’t be dealing with the word “the” in possessive phrases, like “hata an fhir” (the hat of the man), “hataí na bhfear” (the hats of the men), “hata na mná” (the hat of the woman), and “hataí na mban” (the hats of the women), except to note that yes, there is that distinction and we’ll talk about it more another time.

So how do we see grammatical gender in action in Irish?  By what happens after the definite article is applied!   Remember: bean, a woman, but an bhean, the woman.  That change is called lenition (séimhiú) and we have to remember to use it for words starting with b, c, f, g, m, p, if the word is feminine and singular (“the woman” but not “the women”).  This process, lenition, is part of the practice of “initial consonant mutation,” which applies in various ways to all Celtic languages, and in very very few other languages of the world.  So for today, we’ll practice applying “the” to the instruments named in the néal focal (word cloud) above.

The first 10 have been practiced in recent blogposts, so this should be just a quick review.  Then we’ll add the other eight.  The answers and translations will appear below (thíos).

And now the new ones:

Finally, we have two that must be plural, since just like the “sound of one hand clapping,” we need at least two of these to make a sound (unless, of course we bang them on a hard surface, like a table, but I doubt that that would be considered very “ceolmhar” (musical).   So, here we have the plural form “na” (“the” before plural nouns):

Hope that was fun and useful.  A good classroom exercise, I imagine.   SGF  — Róislín

3..bodhrán, an bodhrán, the bodhrán

Now that’s intriguing — three musical instruments starting with “f,” and all feminine  — any mnemonic is good enough for me!

And now the new ones:

15..orgán  béil, an t-orgán béil, the harmonica (our only example today of the t-prefixing which happens before masculine singular nouns beginning with a vowel, as you’ve probably seen with phrases like “an t-uisce” and “an t-im”)

Ag Seinm Ceol Gaelach?  Irish Words for Musical Instruments and How to Use Them in Phrases (Pt./Cuid 1)Posted by róislín on Mar 22, 2018 in Irish Language

Ag Seinm Ceol Gaelach?  Irish Words for Musical Instruments and How to Use Them in Phrases (Pt./Cuid 2)Posted by róislín on Mar 25, 2018 in Irish Language

Eleven Pipers Piping, but not for Christmas per se, or, Ó Mhálta go Mars ag píobaireacht linn Posted by róislín on Mar 31, 2018 in Irish Language