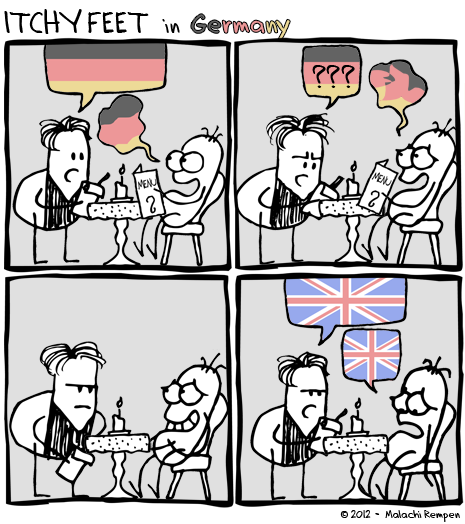 These days, if you’re a native English speaker, or even halfway competent in English, you can travel just about anywhere in the world and get by. This is admittedly a broad generalization, but when’s the last time you returned from a trip without having once met someone who spoke even a single word of English? Being the international business language that it is, and tourism being a huge business, everyone in any international market knows they’ve got to speak English to get by. If signs are printed in multiple languages, English is almost always one of them. If you only speak Italian, or Farsi, or Burmese, you’re just going to have a rougher time of your globetrotting, I’m sorry to say. English is fast becoming ubiquitous.

This is a wonderful development for English-speaking travelers. For native English speakers trying to learn new languages, this can be a pain.

In developing countries, the job in the hotel, restaurant, or office often goes to the fellow who speaks better English. Even among English-speakers there can be fierce competition, so any opportunity to practice their English is welcomed. In Morocco and South America I’ve often had locals come up to me, excited for the chance to workshop their English with a native speaker. As a language learner myself, I have a soft spot for others like me, so I usually give in. In these cases, if you’re learning their language, you can often just swap time – ten minutes in your language, ten minutes in mine.

In Europe, the problem is slightly different. In Germany, Switzerland, Holland, or any of the Scandinavian countries, finding someone who doesn’t already speak perfect English is the challenge. They’ve grown up watching our TV shows, listening to our music, and in some cases, studying in English at their universities! It’s quite an unfair advantage. As depicted in the comic above, if they detect a hint that you’re a native English speaker, they’ll immediately switch. Often times they’re quite proud of being able to speak English so well, and who can blame them? I’d be proud too. I recall once I was at a party in Holland, and when it suddenly became clear that I didn’t speak Dutch, everyone at the party unanimously decided to speak in English for the rest of the evening, even to one another, just for my benefit!

Luckily I wasn’t trying to learn Dutch. But if you are trying to get some practice in their language, these situations might grind your gears. I have a couple local Berliner friends who will speak in German with me, but only when I ask them specifically to do so. Even then they have to bite the bullet and be patient with my linguistic flailing, knowing full well that we could be communicating perfectly well in English.

But they’re my friends. You may run afoul of the classic Impatient Local. He knows you’re learning his language, and he doesn’t care. He lives in a city often visited by American or Australian or English tourists, and has had about enough of them butchering his language with their atrocious accents and Anglofied grammar. He’s not impressed with your progress, and he may not like English, but he’d prefer to get his point across in your language than wait around for you to figure out how to conjugate “we have been.”

If you are a native English speaker and you run into any of these troubles, here are a few ways you can get back on track with your language learning.

First, carry a sign that says “Speak (Insert Language Here) With Me!” in the language you’re trying to practice (“Parle Français Avec Moi!”, for example). Nobody who speaks a language natively would carry that sign, so you are self-evidently a language learner. Thus you can skip the always awkward step in the conversation, “yes, I’m American, but I’d really prefer to speak French, please.”

Second, work on your accent. Your native accent. You may not be able to get your throat to roll those German R’s, but as long as you’re not twanging them like an American, they might not catch where you’re from. Encourage their ignorance. You could be Danish! You could be Quebecois! You want to get to the point where they can’t be certain that if they did switch to English, things would improve.

Finally, if nothing else works, tell them “we’ll speak English when we’re in England!” They should be happy that a tourist or expat is trying to learn their language while staying in their country, when often times it’s not entirely necessary. Just keep calm, be polite, and plow forward, wielding their language like the blunt instrument it is. It’s the only way you’ll learn!

Are you a native English speaker? If so, how do you suggest overcoming the ubiquity of English? If not, have you had similar troubles anyway, or do you enjoy speaking English when abroad? And do you let learners practice your language?