Pronunciation is King Posted by Malachi Rempen on Jul 21, 2014 in Archived Posts 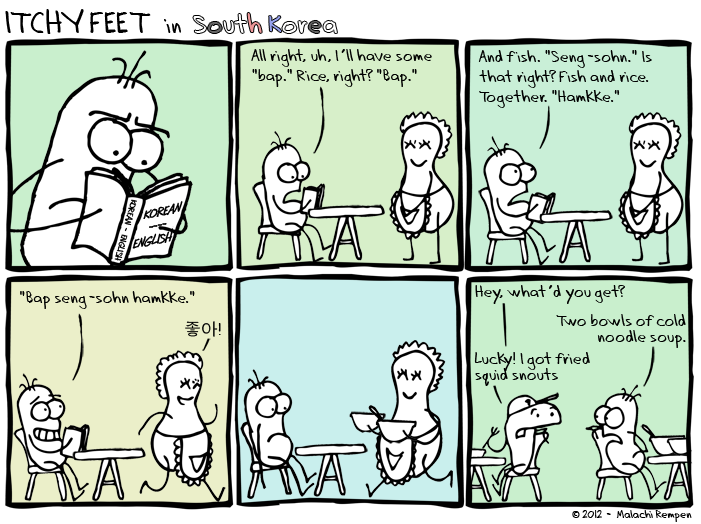 The above comic is one of the very few I’ve done (along with the one from my previous entry) which is taken verbatim from personal experience. In 2008, I was on the island of Muuido, off the coast of South Korea, in a little restaurant on the beach. It was apparently off-season, as there was nary a soul in sight apart from myself and my travel companions. I was far enough off the beaten track that the waitress (also the eatery’s proprietress and cook) didn’t speak a word of English. I, of course, didn’t speak a word of Korean. But I wanted to try. The rest played out exactly as it does in the strip – after consulting my dictionary, I said “rice” and “fish” and received two bowls of cold noodle soup. They were delicious, but contained no perceivable trace of either rice or fish.

I’ve since made South Korean friends who read the strip above and don’t get it. By all rights I should have received fish and rice! I said the words, after all. And it’s not like a Korean restaurant on a Pacific island would be out of fish and rice, right? The only conclusion I can draw from my adventure is that my pronunciation was off. Way off.

And when it comes to speaking languages, pronunciation is king.

My wife is Italian. She speaks excellent English – she’s fluent. She wasn’t when we first met, but after five years with someone, you pick it up pretty quickly (ProTip: want to learn a language? Date a native speaker with poor skills in your native language!). She can even understand the molasses drawl of the cowboys that live out by my dad’s place in rural New Mexico. She has trouble understanding the British, but who doesn’t? The only snag is that occasionally she’ll pronounce words with a strong Italian inflection. You would think we’d get what she’s trying to say, but we’re used to hearing words the way we’re used to hearing them. She often has to repeat a word like “transparent” several times before the listener gets it. It can be discouraging at times. How good can your language skills be if people can’t understand a simple word?

We lived in Lyon, France for exactly one year. I arrived knowing exactly zero French, and felt that after one year I was more or less conversational. I was no longer paralyzed by the fear that I would be ostracized as a dirty foreigner, as detailed in my very first post here.

On the morning of our departure, leaving Lyon for good, I walked into a boulangerie to order up some baguettes for the long train ride to Venice. Here’s how the conversation went.

True story. I couldn’t believe that after a year, I couldn’t even make myself understood ordering baguettes. What could be simpler? Surely my French was terrible!

The thing to remember is that while pronunciation may be king, it is not necessarily tied to your language ability.

My father is German. He’s been living in the United States for 27 years, and speaking English for longer than that. He is obviously fluent in English (so fluent that he doesn’t like speaking German with me!), but he still has a German accent. But he doesn’t care! He knows he speaks English, and he doesn’t let a little thing like his pronunciation or accent get in the way. The mother of my childhood friend was Israeli, and always felt that her English was somehow wrong. An accent is a beautiful thing! So what if you have to repeat a few words now and again?

My pronunciation of German words is pretty good. So good, Germans occasionally think I’m German. I’m not quite fluent, and in certain subjects have real difficulty making myself clear, but the pronunciation carries me. People assume my German is much better than it actually is because I can say “Bundesverfassungsgericht” like a local. Conversely, in French, because my accent is so strong, people often assume my French is much worse than it actually is.

Pronunciation is king, but it is not necessarily tied to language ability. So don’t be discouraged! If you’re a natural at pronunciation, don’t get lazy, get better! If your pronunciation sucks, work on it! Your accent is the spice you bring to the table.

Just please, someone, for the love of Mike, tell me how to correctly say “fish and rice” in Korean!

Now let’s hear about your pronunciation troubles. Have any funny stories? Can’t shake that accent? Have you learned to listen to what non-native speakers are trying to say, rather than listening to what they’re literally saying?