Oh, hey! Nice to meet you. I’m not from around here. My name’s Lindsay and I blog over at Lindsay Does Languages, make language videos over on my YouTube channel, and teach languages via Skype. Phew.

Today, however, I’m here on the Transparent Language blog to share some tips about learning multiple languages simultaneously. Over the summer, I ended up learning four languages at the same time! Not on purpose, you understand, but it was a pretty crazy time. I like to think I managed to stay sane…I’ll let you be the judge of that. 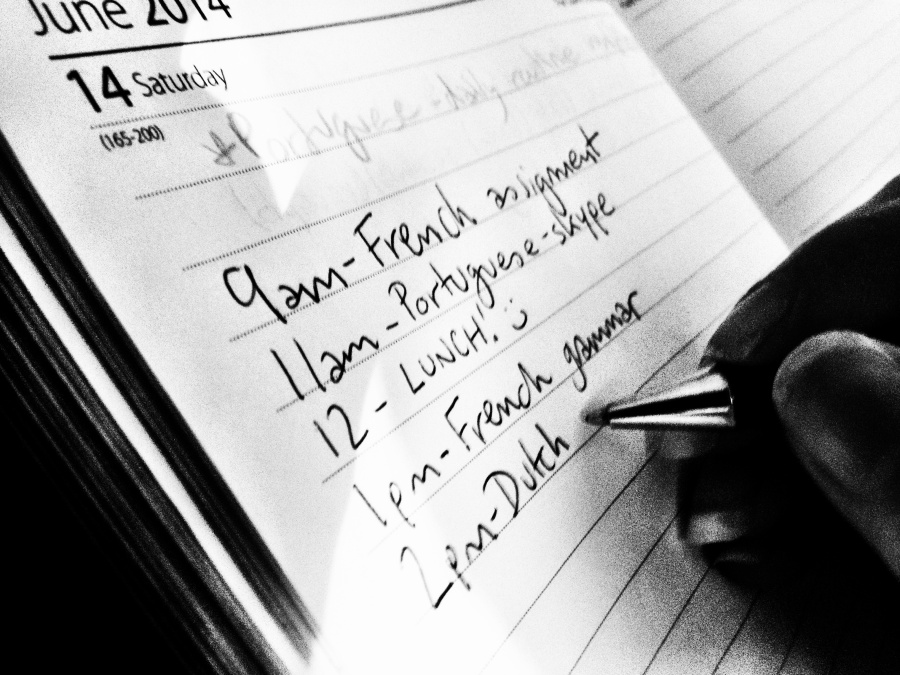 Even if you learn a language and never ever get the chance to use it, one thing that will be a useful skill to come from your efforts is your organisation and time management. Hooray! This doesn’t mean that if you’re always being teased for being late and messy then you can’t learn multiple languages. Of course you can! Your time management and organisation will improve. You know the saying ‘one man’s trash is another man’s treasure’? Well, one man’s late is another man’s on time…kind of. As long as you’re happy with your organisation then you’ll get stuff done. Boom!

In writing this, I’m not saying that learning multiple languages at once is an easy task but it’s definitely achievable if you’re realistic. You’re not going to perfect your French in 6 weeks if you’re also trying to learn Arabic from scratch at the same time. Set yourself realistic goals and don’t worry if you find yourself studying one language more than the other at any one time. Personally, I’m totally guilty of this! I feel bad for a language if I don’t study it as much as others – like I’m neglecting it – poor language! Slowly but surely, I’m learning that there’s not enough hours in the day to devote equal time to all the languages I’d like to. And I’m learning that that’s ok.

Language learning shouldn’t be a chore. The moment something becomes boring, find a new way to learn it – mix things up and keep it fresh and interesting. Find a YouTuber in the language you’re studying or look for a local conversation partner to talk in the language about stuff you’re interested in. Also worth noting here is that although I haven’t yet tried it myself, I heard recently that double subtitles are a thing?! This could be mind blowing in a good or a bad way but it’s definitely worth a shout!

If you’re learning a language for fun, then pick languages you know you can learn together that won’t inflict upon each other. For some, the best thing ever might be to learn Spanish and Portuguese at the same time, but for the majority of people this will be ridiculously confusing and counter productive. Save the Portuguese for a later date and replace it with Korean, for example, and you might well be more successful in all three.

Integrate your languages into your everyday life in a way that suits you. The more languages you learn at once, the more important it is to make time spent on everyday tasks useful. Pop a little book in the bathroom for when you’re brushing your teeth, invest in a little MP3 player or copy a CD for the car to play on the commute. Whatever you do every day, think of a way to language-ify it. And then make up a word like language-ify to describe it.

6: Find what works for you.

This one is definitely closely linked to the last point and you’ll have to experiment a bit to see what works best for you. For example, you could try putting one track from a language learning CD in each language on your MP3 player. Or you could try listening to the whole thing in one language for a week, then swap languages the week after. Although most people claim to prefer sticking to one language at once, this is definitely something that varies person to person, so take some time to find what you prefer.

Don’t punish yourself if you don’t study “enough” or if you deviate from your schedule. It happens from time to time. You may be awesome but you’re still human, and sometimes humans need a break. Give yourself one. Even if that break involves watching a double subtitled film. Enjoy it!

Are you learning multiple languages at the moment? Did you find these tips useful? What would you recommend? Let me know in the comments!

Learning multiple languages simultaneously takes serious time and commitment. Feel like you can’t fit them into your routine, or don’t even have a routine to fit them in to? Our eBooks have expert advice to help you make it happen.