10 Daily Struggles of Learning a Third Language and Beyond Posted by Transparent Language on Dec 22, 2014 in Archived Posts

On my blog Globalect, I share thoughts and stories about language, travel, and the many places where the two intersect. Lately my focus has been on language learning, as I’m working on my third language (Spanish) while getting ready for my upcoming backpacking trip through Latin America. I learned my second language (Dutch) in about two years, which already made my head a confusing place to live, and now as I’m working on rapidly learning language number three, it’s starting to look like an Escher painting in there.

Here are 10 daily struggles I’m going through at the moment that most language learning addicts will frustratedly recognize from their mental I-seriously-can’t-evens with learning a third language (or a fourth, or a tenth…)

1. After getting used to cycling through two different words for the same thing, you suddenly have to search through three or more.

Suddenly your head is lost in a maze of the English words you use with your friends and family, the words for the same things in a few other languages, and their awkwardly literal and nonsensical translations back into English or cognate almost-the-same-but-no-not-really equivalents (like ‘beaker’ for Dutch beker, which just means ‘cup’). Suddenly simple social interactions are absolutely exhausting.

2. You fill in sentences in one foreign language with words from another (and don’t even realize it).

Sometimes it’s like your brain is a cramped two-bedroom apartment. The master bed is obviously for English (or whatever your first language is), but all the newcomer languages get shoved into the same crowded guest bedroom instead of getting rooms of their own up there. Voulez-vous aller à la Bekleidungsgeschäft? Because French and German are basically the same thing at the end of the day anyways. 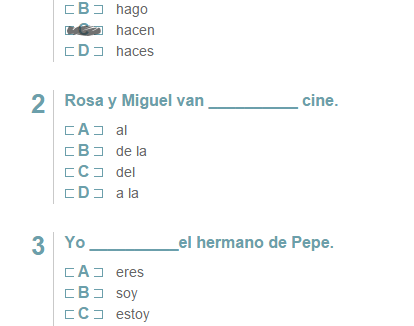 I spent about ten minutes staring at question number 2 on Transparent Language’s Spanish Proficiency test, reading it as “Rosa and Miguel from ____ cinema” (Dutch ‘van’ = ‘from’) and muttering angrily about how the question just didn’t make any sense.

Prepositions are usually tiny two- and three-letter words, and a lot of them are such basic combinations of letters that they appear in many different languages and mean different things. En means ‘and’ in Dutch but ‘in’ in Spanish. De is ‘the’ in Dutch but ‘of/from’ in Spanish, which is van in Dutch, but that same three-letter word means ‘they go’ in Spanish. Spanish uses contra for English ‘against’, where Dutch uses tegen, but tegen could also mean ‘by/before’ as in ‘by nine o’clock’ (tegen 9 uur) or ‘to’ as in ‘talking to’ (praten tegen), whereas in Spanish you never finish a paper contra las dos or hablar contra un hombre.

Once you’ve got three or more languages all staking their own claims on these mini-words, not only do you start mixing them up between languages, but you suddenly wonder if your English uses of words like ‘to’ and ‘at’ sound right to other native speakers. 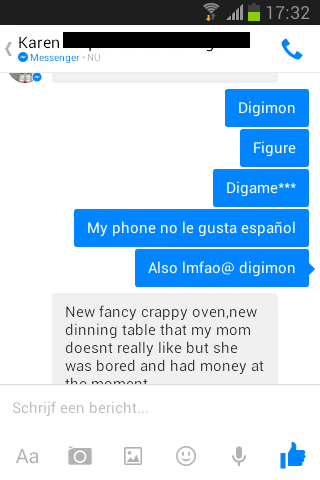 Autocorrect attacks in the middle of my Spanglish conversation. My poor phone is as confused as I am.

Suddenly every text message is bi- or trilingual without you even meaning it to be, even though it makes zero sense. “That’s so cool, omgeving!” “Have you heard the new señor by Taylor Swift? It’s zo catchy, I cuánto get it out of my head.” Your friends start screening your messages for foreign characters and eventually give up trying altogether.

My phone insists that every time I type ‘btw’ for ‘by the way’, what I really meant was btw-verhoging, or ‘increase on value-added tax’. Each day my cómos and dondes are seizing territory formerly reserved for my comes and donderdags (‘Thursday’), so that no text in any language is complete without at least a cameo from each of the other two.

5. You invent really weird false cognates (that no one understands unless they speak all your languages).

Dutch-speaking Spanish learners (or the other way around) get the gifts of gratis and parasol, but just about any other resemblance between the two languages is a social landmine waiting to be detonated. Dutch duur looks a lot like Spanish duro, but you can imagine some of the odd sentences that would come out of confusing these two words meaning ‘expensive’ and ‘hard’. I’ve asked for a carta at a restaurant in Barcelona (kaart is ‘menu’ in Dutch) when I simply wanted a menú, which was fairly harmless, but you certainly don’t want to fall victim to using the Germanic side of your brain to order a váter (a refreshing glass of toilet) in a restaurant in the Spanish-speaking world.

Somewhere along the way I picked up suceso, which looks a lot like the Dutch interjection succes, meaning ‘good luck’, but as far as wishing Spanish speakers suceso goes, you could just yell “event!” or “incident!” at English-speaking passersby and you’d be saying the same thing.
6. Sometimes you can’t figure out what language you’re reading for a painfully confusing second.

Sometimes, for whatever reason, you’re just expecting Portuguese, and even though that website is in Tagalog, you read the first two lines six times trying to make sense of it in Portuguese before your brain makes the jump.

7. You use the word order of your second language in a third one.

If you learn a Romance language with lots of inflections, you’re blessed with relatively forgiving word order, but Germanic languages aren’t quite so easy. Verbs in Dutch and German, for example, tend to come at the end of a sentence, and prepositional phrases go in weirdly specific places in the middle, yielding sentences like “Yesterday went I, after my grocery shopping finished was, very quickly to the school my kids up to pick.” This word order sounds as crazy in other languages as it does in English, but sometimes your brain is just like, damn it, I worked so hard to learn how to do this, I’m not stopping now.

Is there maybe a switch somewhere in your head that just turns the Mother Tongue setting on and off? Maybe there’s just a shelf in your mind labeled ‘not English’ and you store everything else there. Suddenly your strong foreign language declares itself the governor of this new brain territory and you find yourself thinking and muttering to yourself in your second language while studying a third or fourth. “Oh, yyyyyy como se dice ‘bicicleta’ en el alemán? No puedo recordarme…”

9. Having a small stroke every time someone asks you how you say something in English.

“What’s this in English?” is the native English-speaking multilingual’s nightmare, because your answer is nearly always either 1) I have no idea, 2) an entire paragraph of English explanation that could have been easily replaced by one perfect synonym that you just can’t think of right now, or, most embarrassingly, 3) that word in every other non-English language you know but, sorry, can’t find the English word right now.

As you struggle through an inarticulate, almost-interesting conversation in Russian, you can’t stop thinking, UGH NO BUT I COULD TELL YOU THIS SO MUCH BETTER IN ITALIAN. Suddenly your stable second language is a cushy, warm, fluffy home that you can’t wait to run back to and take refuge in whenever you encounter a challenge out here in this big, mean, linguistically confusing world.