How to Say “Paris” the Correct Way Posted by Malachi Rempen on Apr 13, 2015 in Archived Posts 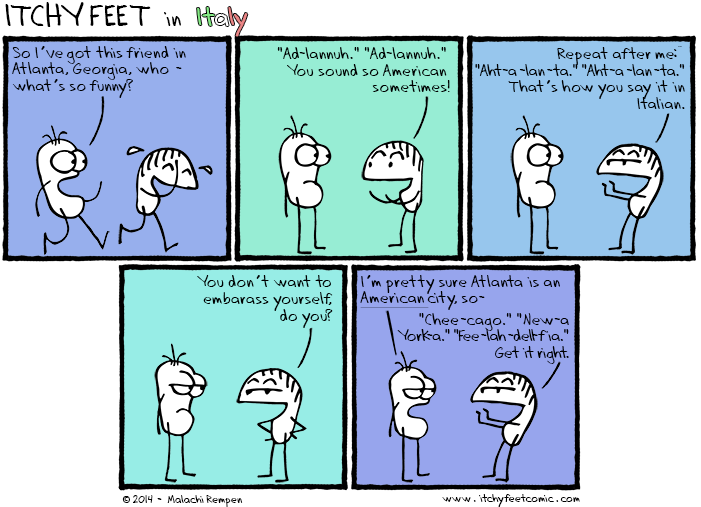 Once upon a time, when I was living in Los Angeles, I saw a stand-up comedian, and like most amateur stand-up it was teeth-clenchingly awkward. At one point during his routine, however, he said something that has stuck with me ever since. I don’t remember the exact words (or indeed even this guy’s name), but it was something to the effect of, “I don’t get why the anti-immigrant camp complains about LA being overrun by Mexicans. Los Angeles was a Mexican city! It was built by Mexicans! If you don’t want Mexicans in your city…don’t conquer a Mexican city!”

It stuck with me as a reminder that history changes the face of all things, but it also made me wonder: what’s the correct pronunciation of the name “Los Angeles”? Since the city was Mexican before it was American, and Spanish before it was Mexican, technically it’s “lows ahn-heh-liss;” the Spanish pronunciation of the words “the angels.” I lived in LA for six years, though, and no one ever said that, not even Hispanics. Everyone said what everyone always says: “laws ann-juh-lus.”

Which one is the “right” one?

In Europe, names of big cities aren’t just pronounced differently, they’re often spelled differently, and in some cases they’re completely different words. Paris (“pah-rhee” in French) is Parigi in Italian (“pah-ree-jee”). Venice (“ven-iss” to English speakers) is Venezia (“ven-et-see-ah”) in Italian, but Venedig (“veh-neh-dich”) in German. The German city Cologne (“koh-lohn” in English) is just the English pronunciation of the French (“cuh-luh-nyeh”), but in German, it’s Kölln (“kuhln”).

This is the case with a lot of words. Even the word for the German language has FOUR completely different names just among the aforementioned languages: German (“jer-man”) in English, Deutsch (“doy-tsh”) in German, allemand (“ahll-mon”) in French, and for some bizarre reason, tedesco (“ted-es-ko”) in Italian. Why does it have so many totally different names? I’d like someone to explain THAT one to me.

But here’s where it gets wrinkly: most Frenchfolk, when speaking English, still call it “Pah-ree” and not “Pa-riss.” To them, after all, there’s only one “correct” way.

I sympathize completely. When speaking a foreign language and a city (or a word) from your native language comes up, the temptation is very strong to pronounce it the way you’re used to pronouncing it, not the way they do in the language you’re speaking. For example, “McDonald’s”, as in, the restaurant chain. If it comes up in a French conversation, I think to myself, do I really want to pronounce it with a goofy French accent? Or do I want to temporarily drop my French just so I can say it the American way? Honestly, I have no answer. I still struggle with this.

(My wife, an Italian, has made fun of the way I say spaghetti (“spuh-get-ee” for Yanks) enough times that I now only say it the Italian way, even when speaking English, for fear of being shamed in my own house…)

What about you? What native words do you refuse to say in the accent of the foreign language you’re speaking? Which ones do you cringe when hearing foreigners say it? What’s the correct way to say “Los Angeles”?