Language Learning in the Movies Posted by Malachi Rempen on Apr 27, 2015 in Archived Posts 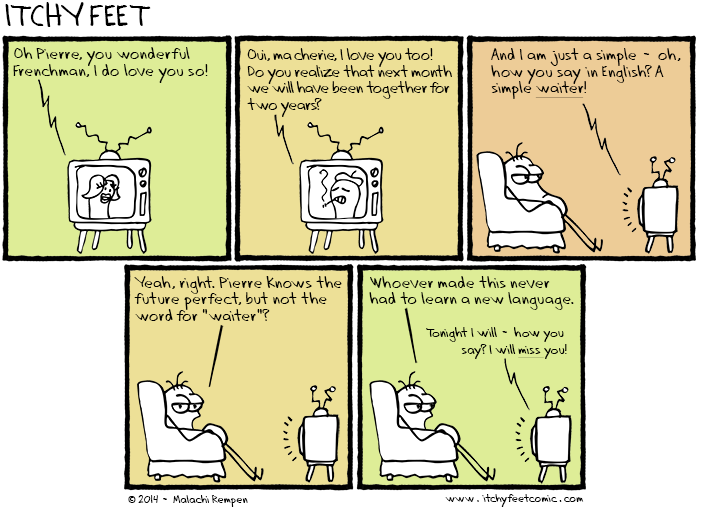 This one is a pet peeve of mine.

Now, I admit it’s only a pet peeve because language learning is something I do, and I don’t like seeing things I do misrepresented in the movies. But really, who hasn’t felt that way? I’m sure lawyers are constantly rolling their eyes at the way trial proceedings are portrayed, police officers and soldiers must find it absurd how most people use weapons in the movies, and, of course, never watch Indiana Jones with an actual archaeologist. They even get movie making wrong in the movies! Wag the Dog is a 1997 film about the government hiring Hollywood producers to concoct a fake war on the news, and the parts where they actually film these fake war scenes are completely inaccurate, to a laughable degree. I mean, how hard is that to get right? You’re making a movie about making a movie!

But back to language learning. Generally, English-speaking foreigners in the movies are portrayed one of two ways. Either they have a superheroic ability to speak dictionary-perfect English—they just have a strong accent so we know they’re foreign—or they speak a bizarre pidgin, an English native speaker’s approximation of beginner’s English, which is basically normal English but with a bunch of nonsensical mistakes thrown in the mix.

I can think of three specific offenders off the top of my head. That’s how much it bothers me—I can’t forget them!

The first is Carol Reed’s otherwise magnificent 1949 noir The Third Man. In the film, detective Holly Martins is poking around postwar Vienna after hearing that a close friend, played by Orson Welles, has apparently been murdered in the street. Early on, the reluctant gumshoe questions various witnesses to the crime, including an old Viennese porter.

This exchange inspired the comic above. You’re telling me this old Viennese porter knows without hesitation how to correctly use the past perfect unreal conditional (“couldn’t have been…”) but not how to say “quite dead”? Unmöglich!

Another Hollywood absurdity is the character with the perfect grasp of both English and an obscure local language, despite not being a native, and translates flawlessly for the benefit of the protagonist. In 2004’s Sky Captain and the World of Tomorrow, the eponymous hero has an Iranian compatriot named Kaji, who conveniently speaks perfect Tibetan. When it comes time to employ it, he’s so good that he doesn’t even need to pause before translating—in fact, he starts speaking over the Tibetan, so that we, the audience, don’t have to wait around for the local to finish his sentence. How thoughtful, if implausible.

The final linguistic reprobate on my list is Modern Family, the ABC comedy sitcom about a…well, a modern LA family. One such modern family member is Gloria, played by Sofía Vergara, a sexy young Colombian wife of the family patriarch. Of course, her English is perfect until, for the purposes of a joke, it’s suddenly not. One particularly galling running gag is her apparent inability to remember the English word for “helicopter,” which she humorously calls the “ggda-ggda-ggda-ggda” (helicopter noise). Had any of the show’s writers bothered to look up the word “helicopter” in a Spanish-English dictionary, they would have discovered that it translates to…“helicóptero.” Not exactly the most difficult word to remember, Gloria.

There is, however, one movie I can think of that does a fabulous job realistically portraying a language learner: the 2003 British rom-com Love, Actually. In one of the film’s many subplots, Colin Firth plays Jamie, a fellow who’s trying to woo the Portuguese Aurélia, who doesn’t speak a word of English. Our man bones up on his Portuguese and pays a surprise visit to the restaurant where she works. Charmingly, the English subtitles approximate his broken Portuguese:

Her response, of course (in English):

Aurélia: That will be nice. Yes is being my answer.

It just goes to show that portraying the imperfection of language learning is much more interesting and endearing than showing James Bond, for example, speak every language without error. But I also wouldn’t mind if a bit more thought and research went into how languages are spoken imperfectly, if for no other reason than it bothers me, and I’m trying to enjoy the movie over here!

What about you? What language errors have you noticed on the silver screen or boob tube? How is your native language represented?