Part of the reason I love learning languages is that it teaches me so much about the human brain and human interaction. 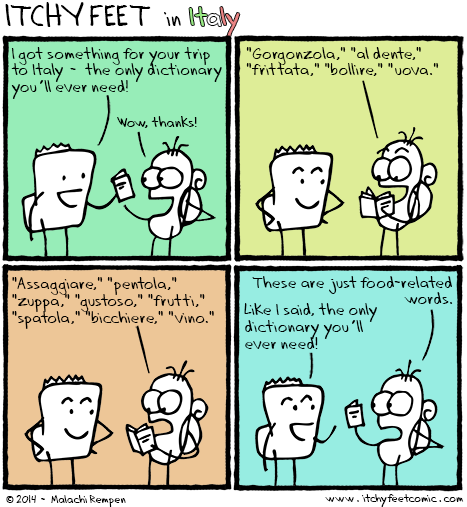 I’ve never studied much neurology or sociology or epistemology or anthropology—I was more of a travelology and daydreamology type of student, myself. But with languages, that social glue unique to humans (at least until someone translates dolphinese), I feel I’m getting a constant informal education on the way the brain absorbs information, restructures it, efficiently uses just what it needs and puts aside that which it doesn’t. I have front-row seats to these insights because language-learning happens purely in the brain. Learning other skills, like pole-vaulting or the ukulele, can teach me a lot about my body, but wrestling with adjective endings, figures of speech and unique grammar rules teaches me about my mind.

For example, in taking on two different languages, Italian and German, in two different contexts, I’ve observed my own brain choosing what’s important and what isn’t, and sticking to it. This is much harder to notice from within one’s native language, but with two foreign languages at roughly the same level yet used for different purposes, I can compare and contrast.

I learned Italian without studying it at all, believe it or not—it was absorbed during the years spent living abroad and traveling with my then-girlfriend-now-wife. At the time, she didn’t speak much English, and her family and friends spoke absolutely none. I had no choice but to pick up the language, or else be damned to rely forever on a third party to translate. Because my only inputs were from social occasions—dinners, outings with friends, etc—my Italian, even today, is extremely informal. Imagine having learned your language just from parties and mealtime conversations and you’ll have an idea of my abilities. Like the comic above, my internal dictionary is quite capable at expressing my feelings about that slice of prosciutto or what kind of risotto would be good for tomorrow’s lunch—but sit me down at a business conference or government office, and I’m as helpless as a beached whale.

With German, the opposite is the case. Despite living here in Germany’s capital, I’ve learned the language almost exclusively in classrooms, and my most common real-world application for the language has been a thrilling variety of bureaucratic offices—town halls, local councils, tax offices, housing agencies, phone companies, law firms—as well as reading and responding to letters, warnings, and notices from the aforementioned administrative organizations. I know my way around Bescheinigungs, Bestätigungs and all manner of Schreibarbeit, but toss me into a pub and watch the wallflower bloom. I simply don’t know how normal people talk in everyday situations, because until fairly recently I haven’t met many Germans patient enough to ignore their perfectly fluent English and practice Deutsch with me.

Observing this difference in the development of the two languages has been fascinating. It’s as though the brain considers any “new” knowledge or skills to be a vast, tangled thicket, and it can only hack through if it knows its destination (i.e., “communicate with human beings”). Then, it searches for the easiest way from A to B. Once there, the brain treads the familiar path it’s already cut, because why would continue to hack at the thicket if you’ve already made the way? Why would you keep anything that didn’t serve the immediate goal at hand?

This brings me to my favorite discovery, and the most interesting thing I’ve observed from my attempts to pick up foreign languages: we humans can choose the road less traveled. All other organisms on this planet, from dogs to trees to microscopic fungi, choose the easiest route to accomplish their goals, and then never stray from that path unless forced to. That’s how evolution works. When’s the last time your cat challenged herself to try something new, just for the heck of it? When’s the last time you saw a centipede try to better itself, or a bacteria weigh the pros and cons of a new approach?

Never, because they can only learn by accident, where we are free to march into the thickets of the unknown and force ourselves to become learners again. We don’t have to be imprisoned by the comfortable if we don’t want to. I will throw myself into German festivals and picnics and dance parties for the sake of science and self-betterment, I tell you, for the sake of all that’s unique and beautiful about the human condition! And that’s just what I intend to do!

*Storms the Biergarten in a blaze of glory*

What about you? What has learning languages taught you, if anything, about the human mind?