Boots, Blokes and Bucks: Is it Bringlish or Ameringlish? Posted by Malachi Rempen on Jun 8, 2015 in Archived Posts 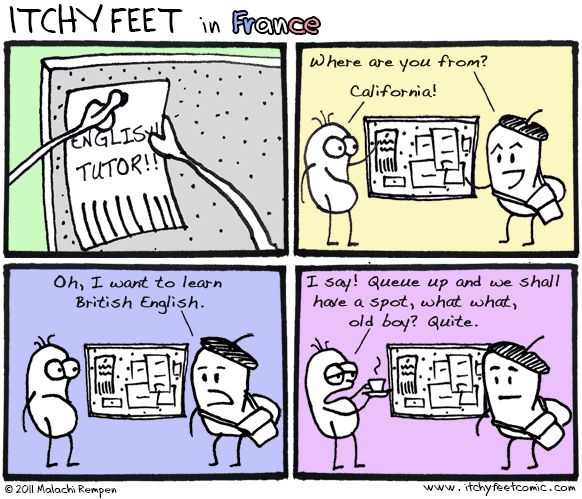 This one’s for all you non-native English speakers out there.

Whenever I run into someone learning English, I can immediately tell whether they’ve learned it out of a textbook or simply by absorbing the media. That’s because if you learn English in the classroom anywhere outside the U.S. of A, chances are it’s going to be British English (or “proper” English, as they prefer to call it). If you learn it from TV, movies and music, however, nine times out of ten you’ll be learning American English (even if the band is British, they’ll probably speak all Americany. See: the Rolling Stones, Blur, Mumford & Sons…). Your word use will give you away, even if you haven’t nailed the accent yet.

Although you’ve probably dipped your linguistic toes in both the media and classroom pools to top up your English, I figured it might be useful to give you an informal and possibly stereotype-enforcing education on what English words come from which side of the pond. If you’re already fluent (as you most likely are, since you’re reading this in English), you can test your own knowledge, since it’s Monday, and you desperately need a distraction from the dreaded beginning of the week.

Boot – let’s start with a trick question. Both, sort of. In both dialects does this refer to a large shoe. In Britain, however, you’ll also hear it in reference to the back compartment of a car, or trunk in Ameringlish.

Bin – Bringlish, when talking about what Americans crassly call the trash can. I say “crassly” because I, as an American, have actually been laughed at, to my face, for calling it as such.

Y’all – firmly Ameringlish. More specifically, southern Ameringlish. Used as the otherwise long-gone second person plural form, a contraction of “you all.” Made famous by cowboys and hillbillies everywhere, but actually quite common anywhere east of El Paso, Texas.

Pants – both again, but beware. In Ameringlish this simply means the things you wear on your legs. In Bringlish this likely refers to your more delicate undergarments. Use trousers when speaking about your leg-sheathes.

Holiday – in Bringlish you can go on holiday, which in Ameringlish would be on vacation. A holiday in Ameringlish is an official day off, like Christmas or Flag Day.

Queue – a very Bringlish word for a line of people, which Americans cleverly call a line.

Chips – another trick question, and one that still to this day can cause great confusion between myself and my Bringlish-speaking friends. Chips in Bringlish is what they call French fries in Ameringlish (or Freedom fries if you’ve just awoken from 2003). Chips in Ameringlish are crunchy, salty snacks made famous by such health-conscious companies as Doritos and Pringles, known in Britain as crisps. If you extend this discussion into other languages, the deep-fried rabbit hole goes even deeper.

Flapjacks – Ameringlish all the way. Means pancakes, which is also used in both dialects, but in Bringlish flapjacks are some bizarre kind of baked oats.

Bloke – Bringlish for guy (used in both). Bringlish speakers might also say chap or fellow. Ameringlish equivalent would be dude.

Football – let me just say yes, I agree with you. It’s stupid for Americans to call this sport soccer just because football was already taken by a sport in which you mostly use your hands. They still use the English system (feet and inches, which the English, incidentally, have all but abandoned), so what do you expect?

Bucks – Ameringlish slang for money. Bringlish equivalent would be quid.

Gobsmacked – as Bringlish as they come, meaning “surprised.”

Rubber – careful with this one. In Bringlish it means something to erase pencil marks, or eraser in Ameringlish. In Ameringlish, when not used in the context of the tree which produces a spongy white substance used in bouncy balls, tires and elastic bands, rubber refers to a condom.

That’s it for this round of Is it Bringlish or Ameringlish? Next time we’ll examine spelling changes (color vs. colour), letters (“zee” vs. “zed”), and expressions (“all mouth and no trousers” vs. “all hat and no cattle”).

What about you? What Bringlish or Ameringlish words do you have to contribute to the list? Mention them in the comments below and I’ll add them above.