Those Three Little Words Posted by janet on Oct 5, 2015 in Archived Posts

In my job, I proofread a lot of documents. Long ones, short ones, formal, casual, you name it… and to add a twist, a fair number of them are written by non-native English speakers. Even when I haven’t been told the author’s identity, I’ve gotten quite adept at spotting those pieces, and it’s given me some interesting insights into the subtle clues really indicate non-native language use.

It’s not just a matter of obvious mistakes: From my proofreading experience, I can tell you that native speakers make those too —just different ones. Plus, while a few of the writers I’ve worked with have yet to gain the English expertise to match their enthusiasm, many others are excellent speakers with decades of real-world English experience. It’s not easy to tell their writing from a native’s.

If you ask me what’s the one thing that most likely to tip me off, though, the answer is three little words: a, an, and the.

Never underestimate an article. They may look small, but they sneak up on you. Just when you think you’ve got them figured out, you learn another rule or another exception that affects their use in some obscure case that native speakers don’t even have to think about, but language learners do. In fact, as innocent as they appear, I’ve seen articles trip up even the best non-native English speakers and writers I know, and I can’t say I blame them. 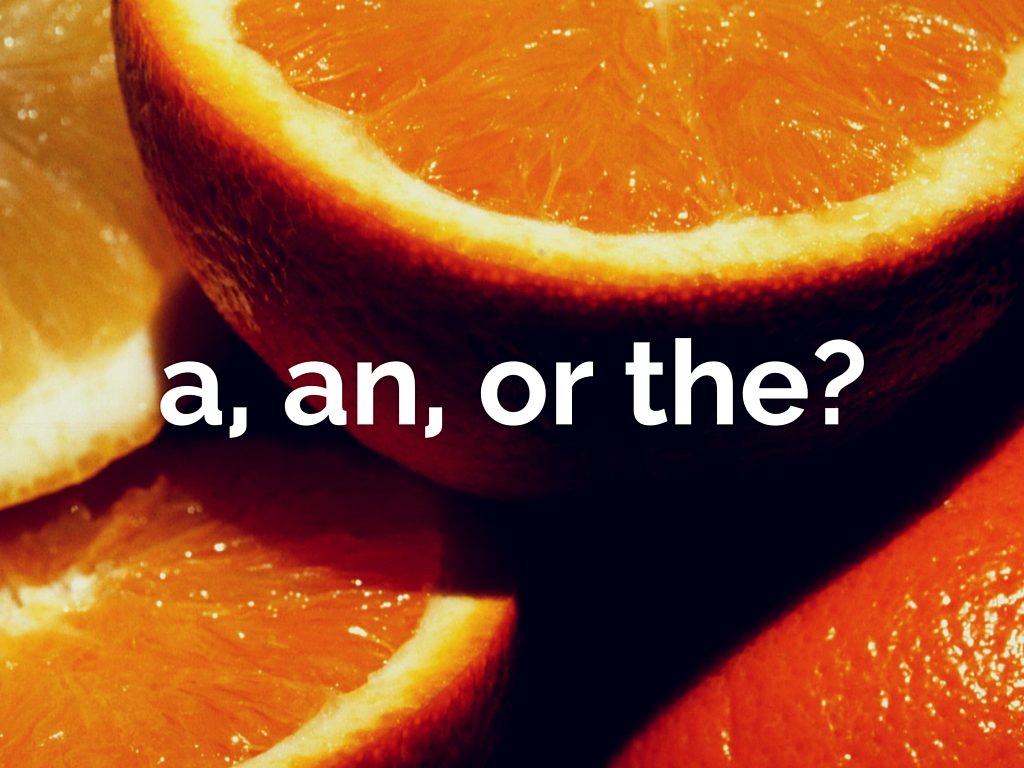 an orange vs. the orange

If you are an English speaker from the United States or Canada, understanding the use of articles in the language you are learning may be a unique challenge for you. Even after an honest attempt, the nuances of article use may remain a mystery to you.

Between them, these sentences have four definite articles, four indefinite articles, and several nouns without any articles at all. They’re all correct, but good luck explaining why —there are historical reasons why we say “the United States” but not “the Canada”, and pronunciation accounts for why a and an are each used once before a vowel and once before a consonant, but can you put into words why it is the nuances but a mystery in the final sentence, or why article use can stand on its own while use of articles cannot? It would take a whole ‘nother blog post to sort that out.

To complicate matters, the rules for articles vary greatly from language to language. Spanish, for example, has an article in Me gustan las galletas. (“I like cookies.”), but none in Tengo fiebre. (“I have a fever.”). Portuguese sometimes uses articles along with possessives, as in Come o seu bolo. (Eat your cake.), while Romanian attaches its articles to the end of nouns. Russian, meanwhile, doesn’t even have definite or indefinite articles in the same sense that English does. Is it any wonder, then, that speakers of one language often find it tricky to capture the fine points of article use in another?

Lest you think it is only a problem for English learners, let me assure you it isn’t. When I ask a native speaker to check sentences I’ve written in Spanish, the thing that gets corrected most is articles. Knowing that, however, has encouraged me to pay more attention to the little words, and the big difference they can make.

What about you? Do you feel like you have articles figured out in the language you’re learning? Or is there some other clue that you think really sets native speakers apart from learners in your language?

About the Author: janet

Janet has been the technical writer at Transparent Language for almost 20 years now, reflecting a life-long love of languages. She speaks English and Spanish, and has dabbled with others. She also loves to travel, and will never pass up a chance to see new things or put her language knowledge to use.