How to “Change the Air” and Keep Things Fresh Posted by Malachi Rempen on Feb 29, 2016 in Archived Posts 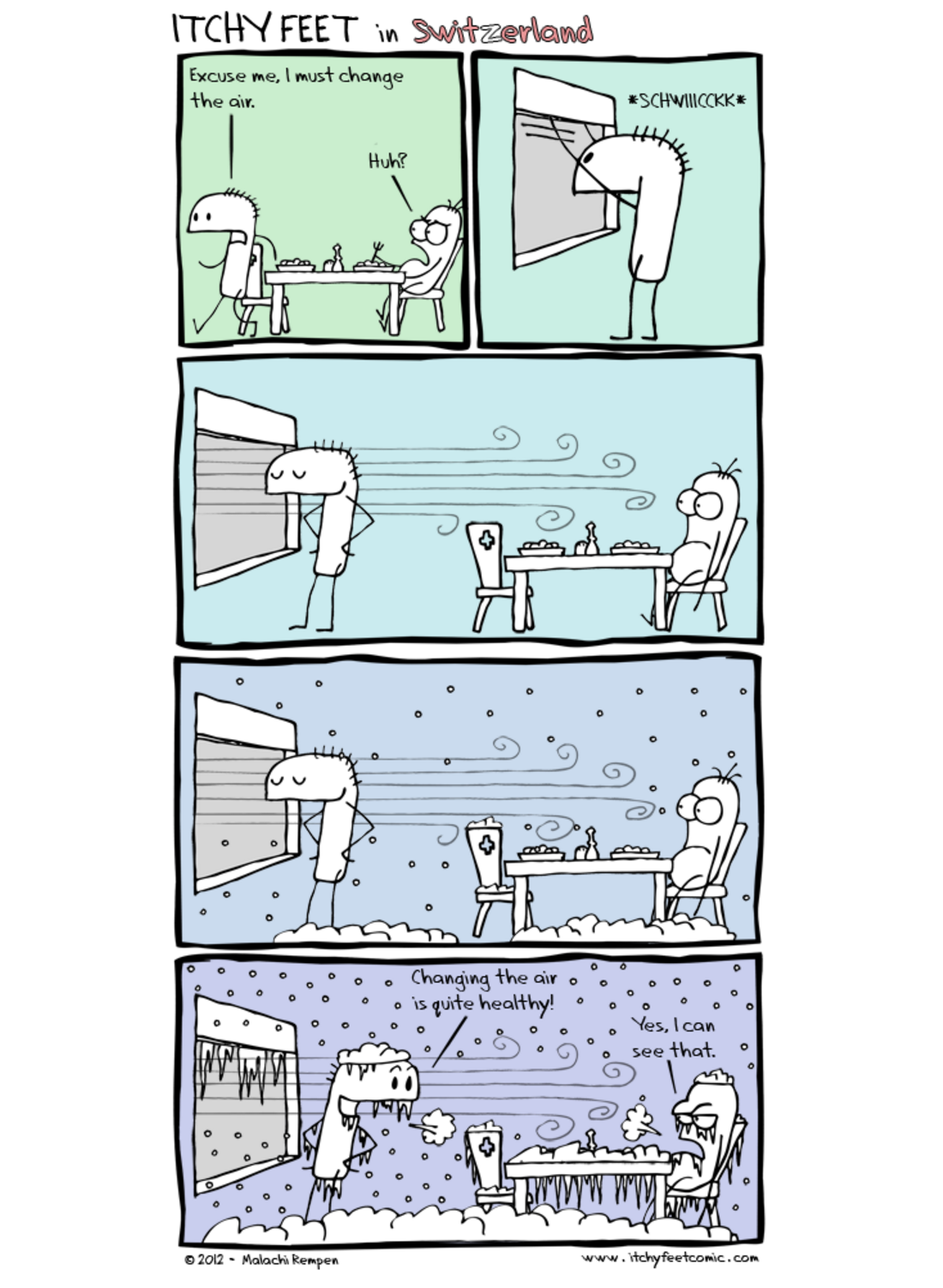 The reason the comic above was written as taking place “in Switzerland” was that I had heard of this curious practice of opening all the windows of the house to “change the air” from a friend, who at the time was studying abroad in a small town near Zurich. Apparently the mother of his host family would habitually open all the windows after dinner – no matter if it was the dead of winter, the middle of a blizzard, or however many degrees minus in temperature. My friend and I, having grown up in New Mexico where the air is far too dry to ever get stuffy, shared a hearty laugh.

I’ve since moved to Europe myself, even wedded a European, and I’ve learned that this is common across the continent. Sadly, it’s also a daily practice in my own household. No matter how many times I protest that it’s literally freezing outside and the whole point of heating up the apartment with heat that we pay for is so that the air doesn’t change, my wife refuses to breathe “old” air. Whaddyagonnado.

It occurred to me, however, that the idea isn’t bad – at least, not the principle of it. We change the sheets when they get stiff and itchy, we change our toothbrushes when the bristles start coming out in our teeth, we change hairdos, we rearrange furniture, we change jogging routes…why not change the very air we breathe every day? There’s something cleansing about it, something about wiping clean the respiratory palette and starting fresh, that seems appealing.

And the same applies – you guessed it – to language learning!

Most of the time, learning a language is a kind of roller coaster: it’s a constant daily variety of challenges, problems and work to keep you busy. But sometimes – let’s be honest – it can get stuffy. Sometimes you can feel you’re suffocating under the same old same old, not making any visible progress. Sometimes you just need to swing open those windows and let the frigid air of change sweep out whatever’s been keeping you down.

First, try throwing away your stack of flash cards and starting fresh. If you’re anything like me, you’ve looked at those cards a thousand times. Sometimes the words will stick, but most of the troublemaker cards you’ll just remember as being the ones you can’t remember. Throw ’em all out! Start from scratch, rebuild that stack. Trust me, it feels GREAT. Like spring cleaning for your flash cards.

Then, head somewhere new and unusual to study. If you have a favorite café where you usually go to hit the books – avoid it! Instead, try bringing your study materials on a hike to the top of a nearby trail. You might not get a wifi connection, but nobody’s going to bother you, that’s for sure. And you’ll literally be changing the air, as well as the blood to your brain!

When you’re back home, read your favorite book or watch your favorite movie in the language you’re learning. I’m not talking about a book or movie you like or you think is important, I’m talking about your all-time five-star bestest favorite ever! Not only will it feel like comfort food, you’ll be delighted at how much you understand. It’ll be like visiting an old friend who wants to help you with your new hobby.

And speaking of hobbies, try doing something completely unrelated to language learning. I often find, when struggling with a problem, that my brain solves it while I’m doing something else. By giving your mind a breath of fresh air in the form of some other activity, you give it room to attack the problem from another angle, often subconsciously. It doesn’t hurt to try new things.

So break your routines, throw out the old, and ring in the new! It can’t hurt, anyway.

What about you? What ways do you suggest we can change the air of our stuffy habits and learn in a fresh new way?