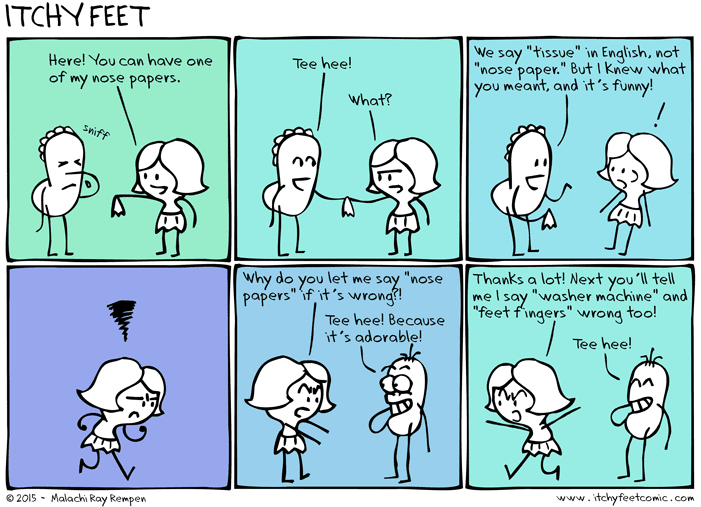 My wife has started to say “tissues” now, and it breaks my heart.

I always loved “nose papers,” even if she didn’t. From her perspective, I’m allowing her to speak the language incorrectly because it amuses me. I understand that. I get the same feeling when I say coperta instead of tovaglia in Italian, basically mixing up “blanket” and “tablecloth,” which her family finds completely hilarious. “Ha ha!” they’ll say, “hey Malachi, hand me the Christmas Blanket for the table! Ha ha!”

But the reason I’m saddened by my wife’s steady improvement in the English language is that I love the new perspective that a foreign speaker brings. As a native speaker, I don’t often get to confront words and phrases that I know instinctively. But speaking with someone with a good, not great, grasp of the language, they often make these little, funny, completely understandable mistakes, and I suddenly see the language from a new vantage point. It’s like when you invite a new friend over to your house for the first time, and all of a sudden you see the place through their eyes, for better or worse. You get a fresh perspective on everything, from your habits of cleanliness to the “art” you have hanging on the walls.

So yes, it’s a little selfish. But I also believe that as with larger, more obvious mistakes, making those little, funny mistakes helps you become a better speaker in the long run. The reason why is simple: there’s no better corrective than embarrassment.

Imagine you’re in a marketplace, speaking a foreign language to a shopkeeper, and you’re trying to buy some soap. Unbeknownst to you, you’ve mixed up the word for “soap” with the word for “eggs.” The poor guy clearly doesn’t understand you, as he’s mostly selling toilet brushes and paper towels, and can’t imagine why you’ve come to him for eggs. So you start miming what you mean, repeating the word “eggs” over and over as you pretend to lather your armpits. Then – you see a lightbulb go off in the guy’s head. “Ohhhhh,” he says, grinning. “You meant soap,” saying a word that sounds, to you, remarkably similar to the word for “eggs.” He laughs, then laughs some more, then calls his friend over, points to you, mimes lathering himself in eggs, and they both laugh at your expense. You’re now laughing along with them, but man, do you feel stupid.

That’s a common scenario for anyone who’s traveled with a foreign language – that sort of mistranslation happens all the time. But the fact that it’s embarrassing seals the deal; it’ll be burned into your memory until the end of time.

And that’s exactly why making these smaller, funnier mistakes are not just okay, but important – dare I say crucial – to the language learning process. You’re learning from your errors, and you’re also entertaining everyone else along the way. It’s win-win!

What about you? What embarrassing mistranslations have you made in your language learning journey?