You don’t always have to crack open a textbook to learn a language. Sometimes you just need to dive into a subject you know absolutely nothing about. 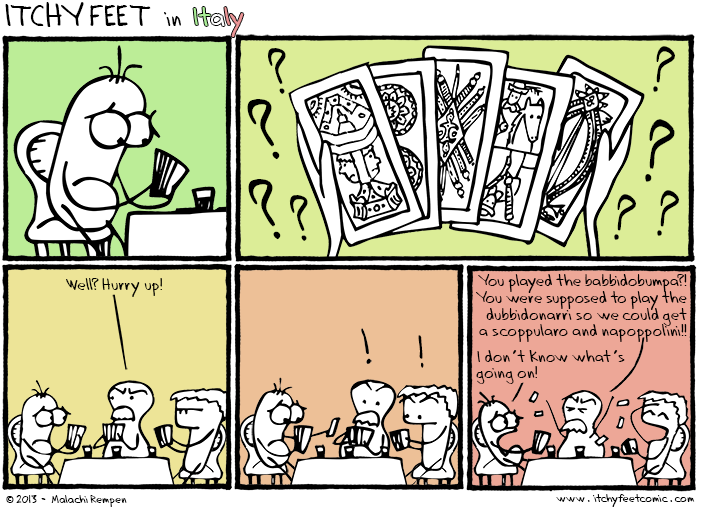 As we all know, the best way to learn is to be thrown into the deep end and then observed from the side of the pool by someone shouting out all the mistakes you’re making.

Okay, so maybe that’s not the best way to learn, but it’s certainly a traditional way to learn, as evidenced by how I was taught to play the Italian card game Scopa. My wife’s grandfather, or Nonno, is your typical lovably gruff countryside gramps. He’s been playing Scopa several times a week for about seventy-five years, so suffice it to say he’d handily beat a card-counting cheating robot programmed in a mastery of the game without breaking a sweat. His method of teaching this game for the first time was something like this:

And it was made trickier by the fact that Nonno can only speak about seven words of “high” Italian before lapsing into the Venetian dialect, which is much harder for me to understand, and by the fact that I’m an incredibly slow learner. I have to repeat things many, many times before I understand them. This was around the time that I wrote the comic above. I was drowned in a flood of bizarre terms, confusing game rules, and my own brain getting in the way.

Yet somehow, shockingly…I did learn how to play Scopa. It took quite a few rounds and several deep glasses of his incredible table wine, but I did it. It’s actually a pretty simple game, so while I won’t give Nonno points for the most efficient teaching method, I will credit him for making the “blunt force trauma” method work.

And the best part is, I learned some great vocab and phrases along the way, which I think I should pass on to you.

Above is a sample of cards from my well-loved mazzo (deck) of Italian carte da gioco (playing cards). The top row is the asso (ace), tre (three), sette (seven), il fante (footsoldier – in Veneto they call this card la vecchia, or “old lady” for some reason, despite clearly being a young man), il cavallo (“horse,” or knight) and il re (king) of the denari suit (a denarius was a Roman coin, back in the day, so it’s the suit of coins). On the second row of the image you have three assi and three re of the other three semi (suits): coppe (cups), bastoni (sticks) and spade (swords; pronounced “spah-deh”, not related to the French pique, which is the “pike” or “spade” that you might be used to). There are 40 cards in total, and each suit has 10 – asso, due (two) through sette, then the fante, cavallo and re, which of course are the 8, 9, and 10, respectively.

These cards are of the trevisane variety, named after the city of Treviso, which means they’re the favorite of those living in the northeast of Italy – namely, the Veneto and Friuli regions. Nearly every region of Italy has their own version of this deck, all with their own little design varieties. The trevisane and bolognesi (from Bologna) cards are distinguishable by their elongated form. The napoletane (from Naples) and siciliane (from Sicily) varieties, by contrast, are more diminutive.

In Scopa, the goal is to gain the most punti (points) by collecting certain combinations of cards, each with a unique name. But the rules governing which combos there are, what points they’re worth and how you get them varies between regions of Italy. I only know how to play the Veneto variety, so that’s what we’ll learn.

The simplest way to get a point is to end the game with more cards than your opponent, called carte. One point. (If both sides have twenty cards each by the end, no one gets the carte point.) The next is to have more cards of the denari suit than your opponent – called denari, of course. One point. Next, you’ll want to get your hands on the sette bello (beautiful seven) and re bello (beautiful king), which are the seven and king of denari (in the image above: top row, #3 and #6, respectively). One point each. Then, if you get all four sevens, that’s called la primiera (no translation, it’s just a name). One point. The most complicated way to get points is called napoli (Naples) or napoletana (neapolitan): if you have the asso, due and tre of denari, you get three points (!). But you need all three. If you have the first three of the denari suit and you also have the four, you get four points. If you also have the five, five points. And so on to ten. The final way to get points in Scopa is of course by getting scope (plural of scopa, which means “broom” for some reason). This is during the game, not after: if there’s only one card on the table, and you have one of the same number (if there’s a seven and you have a seven in your hand, for example), you throw your card down, scream “SCOPA!” and take both cards. That’s one point for each scopa.

The game itself is played by laying down cards and taking cards with the same value, or if you have a larger card (say, a cavallo), taking cards that add up to that card’s worth (cavallo is worth 9, so you could take a 3 and a 6, or a 2 and a 7, or three 3’s, etc). In Veneto, the asso sweeps the table of all cards, but I’ve gotten into arguments about that elsewhere in Italy.

So you can imagine that it’s no mean feat to learn all this by having Nonno shout “PLAY THAT CARD” at you for three hours until you figure it out.

Since learning to play Scopa, I’ve started collecting unique decks of cards and learning a game to play with each. I also have a Swiss Jass deck and a German Scat deck.

Adesso, tocca a te! (Now it’s your turn!) What other unique card decks and games are out there?