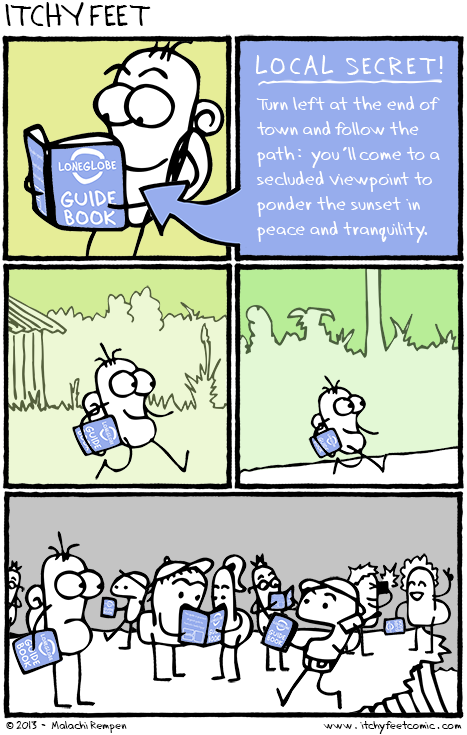 I love travel, and I love learning languages. Luckily the two are quite intertwined, so I often get to indulge in one while working on the other. But there’s one key way in which travel and language are different: the effect of popularity.

When it comes to travel, everyone’s got their own reasons for doing it. I myself like to trick myself into believing I’m discovering secret places. I like to think that no other tourists have been where I am. Unless the sights are particularly stunning, I try to avoid them (Iguazú Falls in Argentina is one example of an unmissable sight, even if it’s as touristy as the Eiffel tower). I like to look for local hole-in-the-wall restaurants and bars, wander through parts of town populated by normal people doing normal stuff, and talk to people to find the best things to do, rather than go online or look in a book. Of course I still use those resources, but when I do I usually end up like the last panel of the comic above: surrounded by people exactly like me.

With language learning, though – that’s the idea!

Generally speaking, if you’re learning a language, you want to talk to people, or read books and newspapers in a culture’s own tongue to get their perspective, or understand what’s being said on TV, on the stage or on the street. And learning a new language is easier the more people and resources you can find to help you learn – which is why the most common languages to learn include English, Mandarin, Spanish, Arabic and French – they’re spoken across the globe in a variety of contexts and there are tons of resources out there for a variety of skill levels and learning styles. It’s easy to find communities of like-minded French learners, and equally easy to come across native speakers who will help you learn (I’ve always wondered, then, why Hindi isn’t more popular – it’s the 5th most-spoken language, but it’s never in the top ten most “useful” or “common” languages to learn…).

Things aren’t quite so easy for more obscure languages – you’ll have a harder time finding a community of Belarusian or Quechua learners, and they don’t have too many language schools, apps or textbooks to help you. You’re off the beaten path, so to speak, and it might make things more difficult.

Then again, maybe that’s exactly where you want to be. It’s easy to board a cruise ship and be sailed around the Mediterranean. It’s a much bigger challenge to hitchhike or bicycle through Europe. But who has the more rewarding experience? It’s possible those that did go through the trouble of learning Belarusian and Quechua are all the richer for having struggled more to achieve their goals. Maybe their experience is the “real” one. It’s probably literally taken them off the beaten path more than once. Having worked on my German and Italian and French and with my sights on Arabic and Mandarin, maybe I’m the one aboard the language learning cruise ship.