Language learning is fun, and it’s tempting to “collect” new ones along the way. But don’t lose sight of your goals. Finish what you start. 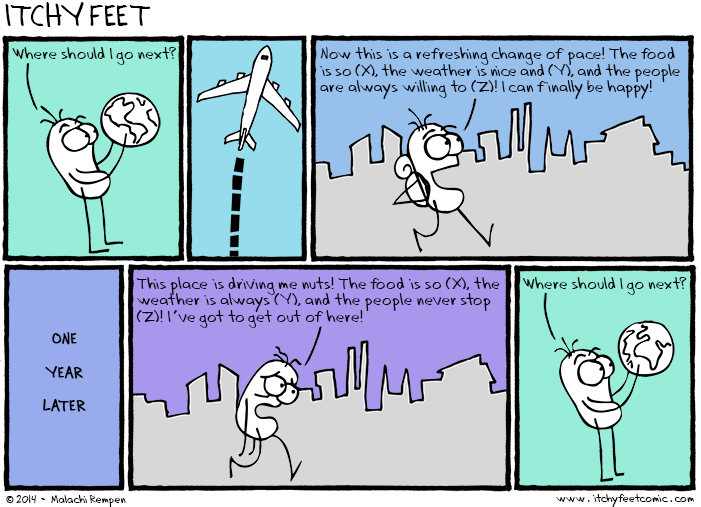 Outside of my cartooning and blogging I’m also a photographer and filmmaker, and in the photography community there’s a psychological phenomenon known as Lens Buying Addiction (LBA). When it comes to lenses for high-end cameras, particularly if your system is one of the big brands like Canon or Nikon, there are literally hundreds upon hundreds to choose from. There’s no such thing as a “perfect” lens that accomplishes everything you want from your images – so you might get lens A for portraits, lens B for landscapes, lens C for low light, and then you’ll want lens D for quickdraw travel since it’s a zoom, but it doesn’t have a wide option so you’ll supplement with lens E, and then there are the more expensive, higher-quality versions of all those lenses that you can save up for…pretty soon hobbyists and pros alike can end up amassing a giant collection. And the worst part is the LBA is fun! You might be emptying out your pockets to pay for all that expensive glass, but you’ll be smiling the whole way.

I think LBA applies to anyone that enjoys collecting anything, including travelers, expats and language learners. We’ve all heard of the “travel bug,” and once you’re bitten, your itchy feet won’t let you rest. But in my twenties I experienced the same thing as an expat – a sort of “expat bug” or “Different Country Addiction” (DCA?) where I wanted to try living in a hundred different places. And no place is perfect, right? So I kept moving, uprooting my life and planting it back down somewhere else. This city doesn’t have mountains? Up we go. This country frowns on alcohol? Well, it’s been fun. This part of the world is too dang cold? Off to the tropics! And so on.

By now you’ve probably guessed that the same applies to language learning. You know it does. Each language has its own little joys and challenges, but there’s no “one language to rule them all” that is all at once fun to speak, culturally rewarding, spoken widely enough to be useful and feature a variety of learning materials and simultaneously rare enough to be interesting and different than what everyone else is learning. So what’s the modern language learner to do? Collect. Italian is fun to speak, but not very useful outside Italy. Spanish is very widely spoken, but almost too much so – and there’s not one culture to attach it to, like Japanese or Thai. Those languages are challenging and make you think differently about the world, but they’re not as widely understood as, say, Mandarin…and so on. Collect ’em all!

There’s no cure for LBA in the photography community, but there are those who eschew collecting altogether. I used to only allow myself to buy one lens at a time so that I would learn to understand the lens I was working with all its limitations. I figured I would be more creative if I couldn’t switch to a different lens (plus, I’d travel lighter, which is always a plus).

The same warning might apply to language learners. It’s fun to collect new languages, and we shouldn’t be discouraged from doing so by any means. But we should also focus on finishing what we have started, to the extent that’s possible. If you start learning a language, stick with it. Get good at it. Make it one of your skills, not just another lens in your bag that you never actually end up pulling out.