Language Learning: the Useful Art Posted by Malachi Rempen on Mar 29, 2017 in Uncategorized

What does language learning have in common with bread? More than you might think. 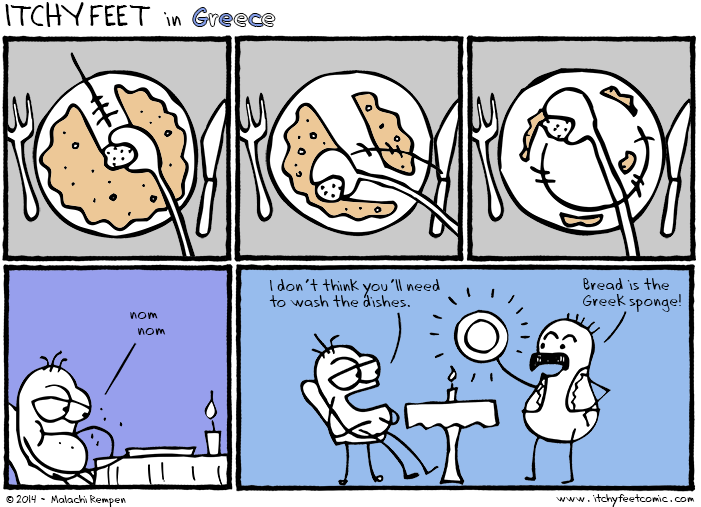 As the Greeks (and Italians, and Spaniards, and North Africans, and really anyone from any country bordering the Mediterranean) know well, bread is the perfect combination of art and utility.

It can be a work of creative genius – fluffy, salty-sweet, decorated with sesame seeds or swirled with cinnamon. It can be a golden-brown work of art all its own, or it can be paired in infinite combinations with all the spices and ingredients the Mediterranean has to offer to create incredible new heights of taste.

But bread is also a tool. It’s a shovel for meat and vegetables, a serving tray for sliced, spread or chipped cheeses, and, as demonstrated in the comic above, a sponge to sop up every last drop of the finest sauces and oils known to man. Bread sits at the center of the table like the wrenches and screwdrivers of a workman’s toolbox, often plain and unassuming, ready to take on any culinary duty that might be asked of them.

Bread is where form marries function. And language, I would argue, is no different.

Language is certainly a tool, this much is obvious. It’s an invention so old it predates human beings (if you’re generous enough with your definitions, anyway). Without language we would be trapped within these sacks of meat we call bodies, unable to reach out and connect to the other meatsacks wandering around. We would be staring out like prisoners behind our eyes. Language is the tight web that binds us, like the Force, or like those strands of fungi that connect all trees in a forest ecosystem (mycorrhizal networks). Given a choice between our all-powerful opposable thumbs and language, I think most of us would choose the latter tool.

But language is also an art. Its beautiful, weaving structures and artful tones could only be created by creatures with an appreciation of higher forms.Art, after all, is at its most basic a device to communicate human emotion from one consciousness to another – and what is language if not the perfect synthesis of that art? Maybe it’s not something we did intentionally (with the notable and wonderful exception of constructed languages like Sindarin (Elvish), Klingon or Toki Pona). Maybe it’s the first art that we human beings created together, without even consciously knowing it, a grand sprawling masterpiece spanning thousands of years and millions of contributing artists. It might just be our most beautiful creation.

So basically what I’m saying is that language is talky-bread. If we could create a language made up only of words for bread, we might implode from our own incredible genius.