Who Exactly Are “Americans,” Anyway? Posted by Malachi Rempen on Apr 12, 2017 in Archived Posts

There’s a lot of disagreement about the term “American.” To whom does it refer, exactly? And why is there this controversy in the first place? 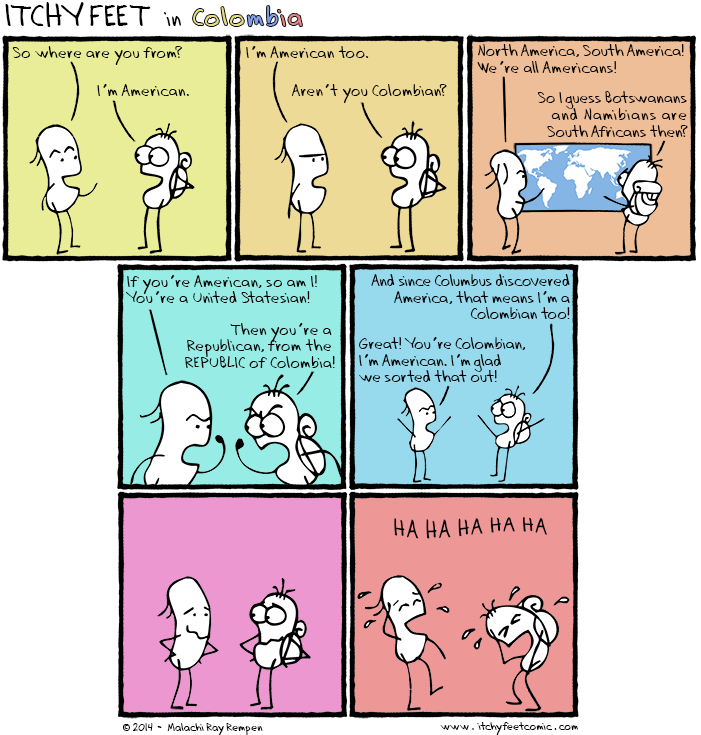 Who would have guessed that a somewhat obscure Italian cartographer’s first name would, five hundred years after his death, be such a point of contention across half the planet?

In the 1500s, explorer and map-maker Amerigo Vespucci was the first to suggest that Christopher Columbus was wrong in thinking that Brazil and the West Indies were not in fact part of India or East Asia, but part of a unique continent. Everyone was like “wow good job Amerigo, we should name this new continent Vespucciland” and he was like “that’s dumb” and they were like “okay America it is! But let’s keep referring to the natives as Indians, because LOL,” and everyone shook hands and agreed.

Well I’m not sure those are direct quotes, but that’s the historical gist of it – and the source of a modern tiff over the eponym “American.”

As the comic demonstrates, Colombians and other South Americans are not happy that the United States has monopolized the word American to refer to citizens of that particular country. They are also natives of Amerigo’s namesake, are they not? Why aren’t they also considered Americans in popular parlance? What gives the USA the right to that word?

The trouble, of course, is linguistic.

Originally, the adjective “American” pre-dates the Revolutionary War. It was meant to refer to colonists living in British America. They were American Brits, as opposed to the regular British kind. George Washington and the other revolutionary leaders took on the adjective as a point of pride, a way to divide themselves linguistically from Britain, and the name stuck. Most other languages use some variation on “American” to refer to citizens of the United States: French = un Américain, German = Amerikaner (or “Ami” colloquially), Dutch = Amerikaan, Japanese = アメリカ人 (“amerika-jin”),  Hebrew = אמריקאי, Arabic = أمريكي, Russian = американец, and so on for many more. These languages simply followed the British lead on the matter.

In Spanish, America is actually the word for both North and South America, together as one continent. In fact, one commenter on my comic above stated, “how many continents are there in the world? For us South Americans it’s undoubtedly six.” In English, “America” is not a continent – North and South are separate. So you can see why, to someone who speaks Spanish, using “Americans” to mean just those citizens of the USA is pretty limiting. It would be as if the term “African” only referred to people from South Africa. People from Morocco might feel a bit put out. In Spanish, people from the USA are called estadounidense, or “those from the United States” (Estados Unidos). This is the first linguistic problem: the word “America” means two different things in two different languages / cultures.

The second problem is that, frankly, unitedstatesians were pretty uncreative when naming their country. Mexico is also a collection of united states, so technically they, too, are a United States of America – but they were creative enough to come up with “Mexico.” Canada could be called the United Provinces of America, but they dreamt up “Canada.” In the USA, however, we just stuck with the quite bureaucratic-sounding “Unites States of America.” Calling oneself American is pretty much the only way to go.

What are your thoughts on the matter? How do you refer to Americans in your language? And what about people from the USA?