Can You Speak Before Understanding? Posted by Malachi Rempen on Jun 26, 2017 in Archived Posts

When you learn a language, you generally are able to say less than you can understand. But is that always the case? 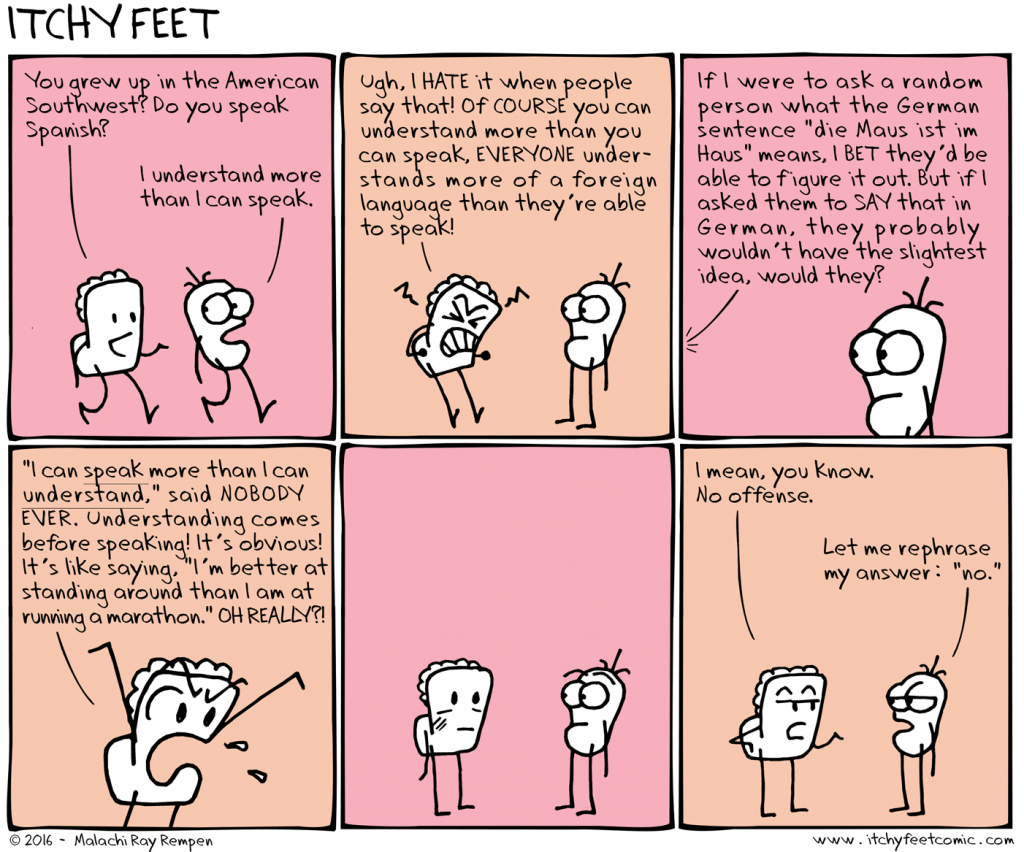 I got a fair amount of pushback on this comic. I guess it’s not as obvious to everyone else as it is to me that when you’re learning a language, you first understand, then you speak, in that order. It’s not an outrageous position – that’s how we learn as children, after all. First we spend a long time listening and digesting and parsing what the people around us are saying, and then we start to try out those sounds and words ourselves, refining and correcting as we go. But it’s not a chicken-and-egg situation. The way I see it, it’s firmly egg-and-omelette: one comes before the other.

Some folks tried to argue that if a language is close enough to your own, you can use words you know and feel fairly confident that it’s correct. I do this in Italian. I don’t know for sure what the word for “telecommunications” is, but I know that’s a latin-based word so I can be fairly confident it’s telecomunicazioni. But that’s not speaking before understanding, is it? I definitely understand the word in my native language, so I would understand it if someone said it in Italian, too.

Others have told me that once you reach a certain level in a language, a kind of “advanced beginner” stage, you have unlocked enough of the language to be able to say a few simple things like “good morning” and “where’s the bathroom,” but the vast majority of the language remains a mystery to you. Thus, it’s easier to speak than understand. But I’m not arguing whether it’s easier to speak or understand, what I’m saying is that you understand more than you can say, at every stage of language learning. I stand by that – even in the “advanced beginner” stage, you understand “that’s a good bathroom” even if you haven’t put what you’ve learned together in that way yet. It’s a matter of passive vs. active vocabulary.

But there are some exceptions I might be willing to concede.

In many languages, native speakers talk extremely fast or have regional accents or slang that make understanding incredibly difficult, even if you speak the language fluently. I mean, that’s often the case with English – there are some accents I just cannot parse, and I’m a native speaker! Looking at you, Scotland. So in these cases, sure, you speak better than you understand. But I’d consider these to be minor exceptions, since it applies to any language, even your mother tongue.

Another possible exception: you could be learning a language just through reading, or you could be learning a dead language. Then you definitely understand more than you speak, right? Nobody really knows how Latin is pronounced. Well, technically, yes, fine. But that’s a different kind of understanding. I meant specifically here to talk about listening comprehension rather than reading comprehension, which is different. But I’ll grant it as an exception. *gavel slam*

And finally, in perhaps my favorite of all the replies, one commenter wrote, “‘I speak more than I understand’ is recommended mode for politicians.” Laugh out loud. Good one.