Can you get culture shock when learning new languages? 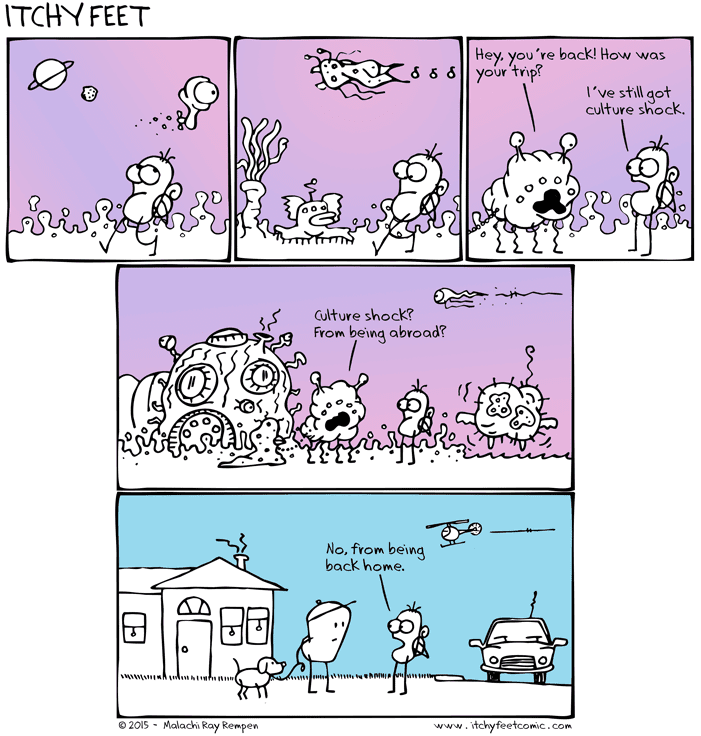 Since moving to Germany six years ago, I’ve been back to the USA a number of times. Sometimes I’m visiting family, sometimes I’m going to a friend’s wedding, sometimes I just want to return to my home town and eat at my favorite local restaurant, the Frontier. Such good sweet rolls…

But every time I re-enter the good old US of A I find myself a little bit culture shocked. Wow, people really are big in this country. Wow, the portions really are…big. Wow, the streets and cars and supermarkets really are…….big in this country. Or the beer tastes so bland, or the accent’s so drawling, or the fashion’s so…unusual. I often feel like culture shock is more pronounced when coming home than it is going somewhere else. It’s re-entry shock.

And I don’t know about you, but I’ve definitely found the same applies to foreign languages.

If I get into a good stride with a foreign language – meaning, if I’m speaking, reading and hearing it for an extended period of time, getting my immersion on – and I suddenly return to speaking English, I often find myself literally shocked by how awkward it is. The sentences are formed the wrong way, there aren’t words for things that are in the other language – it feels weird, like I’m wearing someone else’s clothes. Of course, the effect eventually wears off, but it’s still a certain type of culture shock.

My wife and I at home speak a mix of English, Italian and German, and we’ve gotten into the habit of relying on our purée of vocabulary to communicate with each other. When we have to resort to just one of the languages, when there’s a guest who only speaks that one, for example, we often find ourselves shocked by how little of the full language we actually communicate in with each other. We’ve created our own monstrous language to work with, and having to use just one is so weird it’s almost uncomfortable.

What about you? Do you have “language shock” when returning to your native tongue after some time away?