Sometimes, when you look at the world, it can be easy to despair at the passage of time and the things we lose along the way. Luckily, there are those who make an effort to change the course of what seems to be an inevitability. With dedication, resourcefulness, and teamwork comes success. And so it is that four new courses have been created for endangered Alaskan languages. 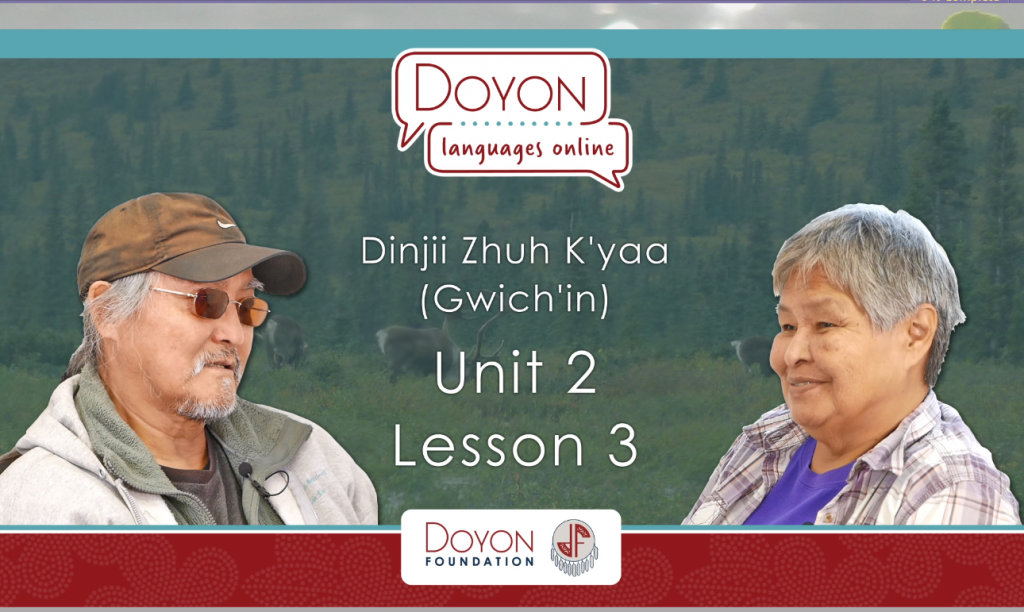 According to the Alaskan Native Language Preservation Advisory Council, there are at least twenty Indigenous languages in Alaska, and half of them are located in the central Doyon region. In the past, Alaska Native children were forced to speak English in schools. Now, few people can speak the ancestral languages, and as the population ages, fluent speakers become scarce. The languages simply could not survive more than another generation or two without action.

Fortunately, along came Doyon Languages Online, a partnership between Doyon Foundation and 7000 Languages. Doyon Foundation is a charitable nonprofit run by the largest private landowner in Alaska with over 20,000 shareholders. 7000 Languages is an independent nonprofit which creates free language-learning courses—with the aid of software donated by Transparent Language—so communities can teach, learn, and revive their endangered languages. 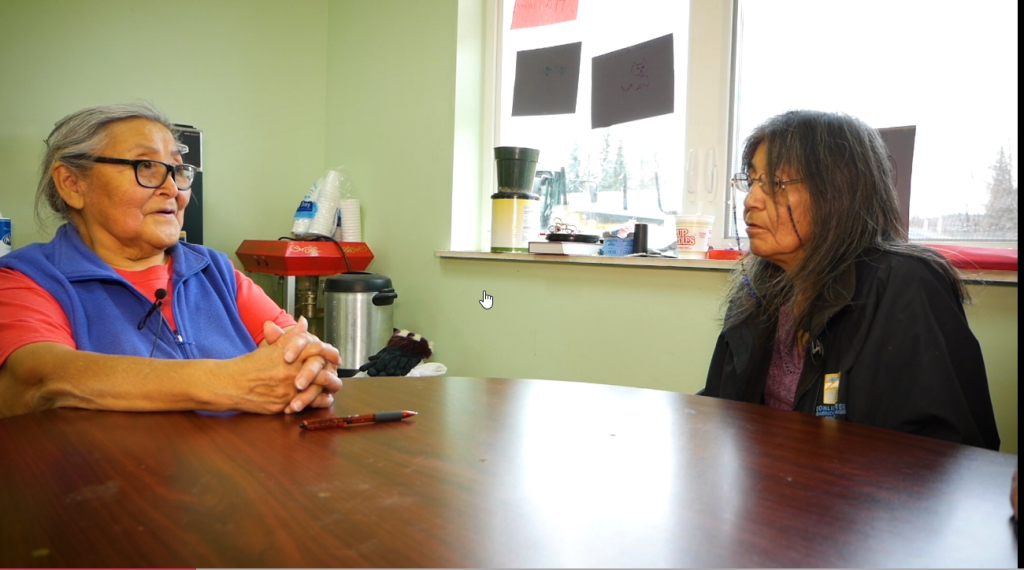 One of the languages, Holikachuk, posed significant obstacles because the last fluent Elder passed away in 2012. “Working from archival recordings, and Elders that have a working knowledge of the language, the content creation team drafted, proofed and recorded 10 units of material,” said Allan Hayton, director of the Foundation’s language revitalization program. The new Holikachuk online course consists of five units, along with seven conversational videos and fascinating cultural and grammar notes. A second course, with five more additional units, will be released in the fall.

Gwich’in, spoken by about 250 people in Alaska and 300 people in Canada, is the ancestral language for about 3000 people in total. The finished Gwich’in course includes 10 units, each with five lessons of content, reviews and unit assessments, as well as nine conversational videos in Gwich’in with English subtitles, and 22 culture and grammar notes. 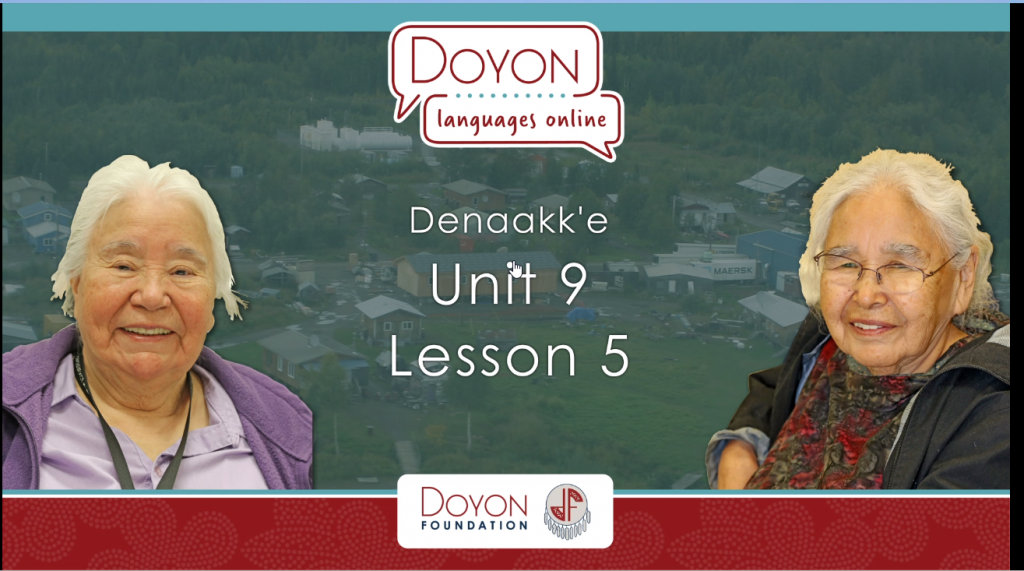 Denaakk’e, also called Koyukon Athabascan language, comes from the land surrounding the middle Yukon River, the Koyukuk River and the Lower Tanana Rivers in the central region of Alaska. Its traditional territory covers 78,000 square miles, approximately the size of the entire state of Minnesota. It, too, has a population of about 3000 with less than 300 active learners of all ages. This course includes 10 units, each with five lessons of content, reviews and unit assessments, as well as 10 conversational videos in Denaakk’e with English subtitles, and 25 culture and grammar notes. 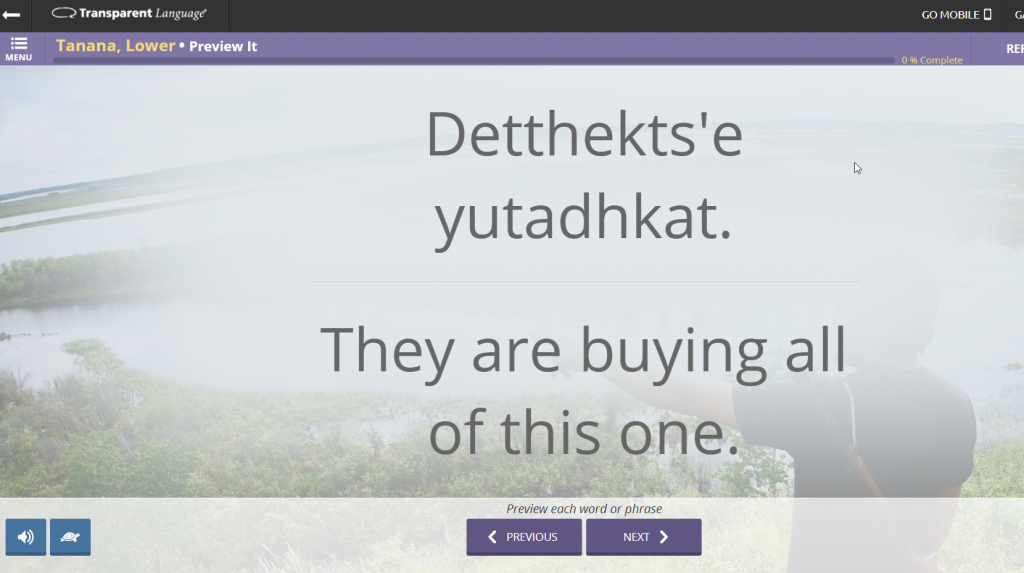 Benhti Kenaga’ is one of many Athabascan languages and dialects from the area surrounding the Tanana River in Alaska, but the only one still in existence. The finished course includes 10 units, each with five lessons of content, reviews and unit assessments, as well as 15 conversational videos with subtitles in English, and 13 culture and grammar notes. The Benhti Kenaga’ Pocket Dictionary, published in 2009 and available through the Alaska Native Language Center, is a recommended supplemental resource for anyone taking the course.

The Doyon Languages Online launch coincides with the International Year of Indigenous Languages. In 2016, the United Nations General Assembly adopted a resolution proclaiming 2019 as the International Year of Indigenous Languages. At the time, it was estimated that about 40 percent of the nearly 7000 languages spoken around the world were rapidly disappearing.

7000 Languages began in 2009 as Transparent Language’s Heritage and Endangered Languages Preservation Program (H.E.L.P.P.), which worked with partner organizations to develop courses in Ojibwe, Balinese, and many other languages. From this pet-project of Transparent Language, it has evolved into a visionary nonprofit dedicating 100% of its efforts and resources into providing technology and support for language revival.

It’s nice to see that perseverance and dedication succeeding.

Many thanks to Doyon Foundation for much of the material found in this blog.