April Fool’s Day comes around each year and with it jokes, hoaxes, and elaborate “breaking” news articles. These “jokes”  spam our email, social media outlets, and lives from the moment we wake till the end of our day. At times, they can be humorous or playful (like Google’s Pokémon Challenge; here), they can be misleading (Boudicca’s grave, Robin Hood’s bones; here), or even cruel (death and alarming hoaxes; here).

April Fool’s Day is the one day of the year where boundaries of societal norms can be transgress; whether it be a ridiculous news article or the elaborate hoaxes. These jokes which would not normally be “accepted” on any other day; however, on April Fool’s Day they are received with open arms and laughing spirits. The first day of April allows all people no matter how popular or unpopular, wealthy or poor, young or old( and so on) a chance to create jokes, pranks, and hoaxes to surprise, scare, or even trick their neighbors and friends.

The history of April Fool’s Day from antiquity to today has changed quite drastically. However, this notion of transgressing boundaries permeates through all the holiday’s transformations and alterations. From the transgressions of male and female, divine and mortal, life and death, low class and high class, religious piety and impiety, and so on are seen within this history’s formation and evolution. How society and people choose to step beyond these boundaries or straddle between them. It is an interesting holiday that is worthy of investigation.

So what boundaries will you cross today?

The Fight Between Carnival and Lent by Pieter Bruegel. Courtesy of WikiCommons, Public Domain, & Eugene A.

Feast of Fools and the Church

In the festival, young people would chose to play a mock pope, archbishop, bishop, or abbot to reign as Lord of Misrule.  Participants of the festival would then “consecrate” him with many ridiculous ceremonies in the nearest main church, giving names such as Archbishop of Dolts, Abbot of Unreason, or Pope of Fools.  This consecration ceremony often mocked the performance of the highest offices of the church. While other participants dressed a sundry of masks and disguises, engaged in songs and dances and practiced all manner of revelry within the church building. The Feast of Fools was eventually discontinued and forbidden 1431 for its blasphemous manner.

The ancient festival known as Hilaria (Latin for cheerful, merry, joyful) was celebrated on the vernal (spring) equinox in honor of the goddess Cybele. The goddess Cybele has a long and extended history from Anatolia to Rome. 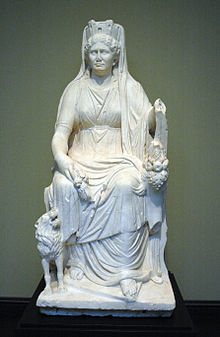 The Romans celebrated Hilaria, as a feria stativa (a set free day [i.e no work]), on March 25 in honor of Cybele, the mother of the gods. The days of the festival were devoted to general rejoicings and public sacrifices (hence its name), and no one was allowed to show any symptoms of grief or sorrow( unless it was the “Day of Mourning”).

According to the historian Herodian, there was a procession and a statue of the goddess was carried. Before this statue, the most costly works of art belonging either to wealthy Romans or to the emperors themselves proceeded. All kinds of games and amusements were allowed on this day; masquerades were the most prominent among them, and everyone might, in his disguise, imitate whomsoever he liked, and even magistrates.

The Myth of Cybele and Attis

The myth of Cybele and Attis is one of tragic love. It is also a story of self-mutilation and regeneration, which is reflected in the Hilaria festival’s schedule and activities. 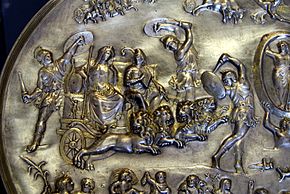 Cybele rejected Zeus’ advances; he would not take her answer of “No.” On night as Cybele slept, Zeus spilled his seed on her. Eventually, Cybele gave birth to Agdistis, a hermaphroditic deity so strong and wild that the other gods feared him. In their terror they cut off his male sexual organ and from this blood sprang an almond tree.

The river Sangarius’ daughter named Nana ate the fruit of the almond tree. As a result of this snack, Nana delivered a boy child 9 months later. Nana decided to expose the child; much like Oedipus. But the infant’s death was not fated. Instead, reared by shepherds, the boy soon became healthy and handsome. He, in fact, became so handsome that his grandmother, Cybele, fell in love with him.

The boy, named Attis, was unaware of the love Cybele bore him. But since she was a goddess, Attis dare not refuse her. In time, Attis fell in love with another. It was the daughter of the king of  Pessinus, and he wished to marry her. The goddess Cybele became insanely jealous and drove Attis mad for revenge. Running crazily throughout the mountains, Attis finally stopped at the foot of a pine tree (hence why the tree is used in the festival). There Attis castrated and killed himself; and from Attis’ blood sprang the first violets. The tree took care of Attis’ spirit, but Attis’ flesh was a different story. Cybele unable to save him called out to Zeus for help. Attis’ body would have decayed had not Zeus stepped in to assist Cybele in the resurrection of Attis.

Schedule of the Festival of Hilaria

The activities of Hilaria were ones of both celebration, death, mourning, rebirth and celebration. This is due to the fact that the spring equinox was the first day of the year in which the length of night and day were equal. It was by this marker that a “New Year” was set and in which the winter was official gone and the rebirth of the year occurred. This is why Hilaria is considered a Death and Rebirth festival and coincides with the goddess Cybele and Attis.

Well, thanks for reading! I hope it was worth your time and you learned something new. Now, I am wishing you all a safe and happy April Fool’s Day!