Today, we will be discussing and translating portions of the Vulgate, the Latin Bible. 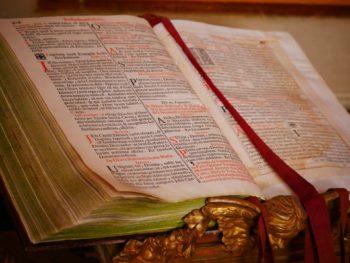 Image by Edward Lich from Pixabay

Vulgate: What is it?

The Vulgate is a late-4th-century Latin translation of the Bible. It is still presently used in the Latin Church.

Vulgate: How did it come about?

The translation was largely the work of Jerome of Stridon who, in 382, had been commissioned by Pope Damasus I to revise the old Latin version used by the Roman Church. Once published, the new version became widely adopted. 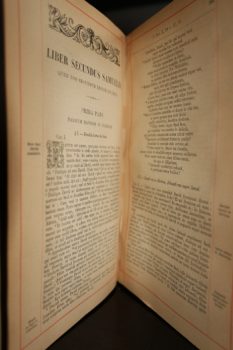 Image by Melanie Simon from Pixabay

For over a thousand years ( 400–1530 CE), the Vulgate was the most commonly used edition of the most influential text in Western European society. Indeed, for most medieval (Western) Christians, it was the only version of the Bible ever encountered.

Until 1450, when Gutenberg printed this text, copies were also very rare and expensive. In the 14th and 15th centuries, the Bible was finally translated into modern languages, against great resistance from the Church. Finally in the mid-20th Century, the Roman Catholic church abandoned the use of Latin for liturgy.

However, this remains one of the most historically important Latin texts.

It should be noted that the “readability” of the Vulgate was quite easy compared to other Latin texts because it had to be attainable by ALL people. The act of translating is quite simple compared to poetry, philosophy, and plays.

The Latin text presented here is based on the text of the 1598 Vulgate, which was used as the standard text of the Vulgate until 1979.

Well, those of the first ten lines of the Vulgate. If this was enjoyable, perhaps we will do more translating of this text later in the year closer to December.