How to Survive Heatwaves in Norway Posted by Bjørn A. Bojesen on Jul 31, 2019 in Holidays, Nature 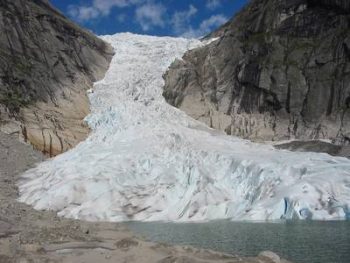 Glaciers such as Briksdalsbreen are having a hard time in the heat. (Image Courtesy of Wikimedia Commons, CC BY-SA 3.0 License.)

Huff så varmt! (Ugh, how hot!) Like many other places in Europe, Norge has also been recently hit by a hetebølge (heat wave). Here’s a tiny survival guide for the next time termometeret viser over 30 grader (the thermometer shows more than 30 °C).

Husk å drikke mye vann! (Remember to drink lots of water!) As a rule, water in Norway is very clean, and you can safely drikke rett fra springen (drink directly from the tap). But do check the water source when you’re på fjellet (up in the mountains)! I’ve heard about people who got very ill after they drank from a brook where a dead sheep was lying rotting a bit further up…

Ikke undervurder sola! (Don’t underestimate the sun!) In Norway, which is closer to the North Pole’s thin ozone layer than your average country, solstrålene (the sunbeams) may actually scorch you more than in Italy… På høyfjellet (high up in the mountains) the sun is particularly bossy – beware of reflections from glaciers and other specks of snow! 🙂 Solbriller og solkrem faktor 30 er en god idé. (Sunglasses and sunscreen w. factor 30 is a good idea.)