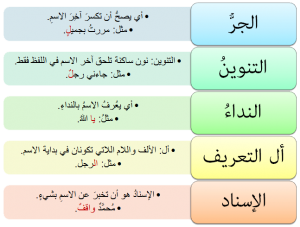 A determiner is a word, a marker or an affixation that comes with a noun to distinguish it from other parts of speech. This is quite the same as with noun determiners in English but of course these determiners are different from those in English.

There are five determiners or markers to distinguish Arabic nouns. If a word accepts one or more of these determiners, then the word is a noun:

1- The Genitive or Idaafa Construction (Majrour): We have already learnt about the different Arabic Prepositions. So, if a noun comes after these particles, then it is in the genitive case and it automatically has a Kas’rah on its ending. We define this noun as “genitive” or as (a Majrour Noun اســْــم مــجــرور) by the preposition (particle) because this preposition was the real cause of this genitive case. In the same way, if the word comes as a part of an Idaafa, it is a Mudaaf Majrour (genitive) noun. These posts about Idaafa and Modaaf structures and definite nouns may help.

= The train arrived at station. (Majrour by a preposition)

= Working hard is the origin of success. (Majrour by Idaafa)

In the above two examples, the words الــمــحــطــة (station) and الــنــجــاح (success) are both in the genitive case (End in a Kasrah) because the first word is preceded by the preposition إلـى and the second comes in the Idaafa construction.

2- The Tanween الــتــنــويــن: Tanween is one form of the Arabic Diacritics. It is a long vowel of (a, e, o) that ends in /n/. Only nouns accept the Tanween. The noun with Tanween can be in any of the three cases and this depends on context.

= A huge rocket was launched. (Nominative case and subject)

= I bought a car. (Accusative case and object)

= The rocket went in astonishing speed. (Genitive case and Majrour)

= I bought the house. (Accusative Case and object)

= I went to the market. (Genitive Case and Majrour)

4- The Vocative Case الــنــِــداء: If a word is followed by one of the vocative particles e.g. (Ya يــَــا), then this word is a noun and is in the vocative case. Here Arabic is different from English.

To sum up, if a word accepts one or more of the above determiners, then this word is a noun.