A Réveillon Raclette Posted by Tim Hildreth on Dec 21, 2021 in Culture, Food, News

It’s almost time for another Christmas Eve Réveillon. While le repas de Noël1the Christmas meal can often be fancy and festive, sometimes you’re just in the mood for something simple and convivial. If you’re looking for something different, perhaps you’d consider a Réveillon Raclette. 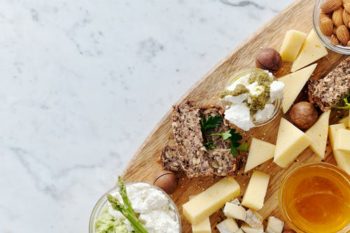 This delicious French/Swiss meal that Josh first described for us back in October of 2017 is having a bit of a moment.

A group of students in the Lorraine region of France recently mounted a campaign to demand that the school cantine2cafeteria serve de la raclette au moins une fois pas an3raclette at least once per year. To make their case, the students hung des affiches4posters in the couloirs de l’école5school’s hallways and even came up with a song:
En chaussettes ou en claquettes/In socks or in tap shoes
J’aime la raclette/I love raclette
Avec elle c’est la fête/With it/her it is a party
J’aime la raclette!/I love raclette!

Despite the challenge of preparing une raclette pour plus de 400 élèves6a raclette for more than 400 students (equipment, cost, etc.) the “protest” – which started as a simple joke to faire rire les amis7to make their friends laugh – was successful.

Le lundi 13 décembre8Monday December 13 (which turns out to be the journée internationale de la raclette!)9International day of the Raclette, the school cantine served up patates, charcuterie, et fromage10potatoes, deli meats, and cheese to the happy kids.

If you’re thinking about having your own raclette, you might enjoy this handy, interactive website from trois amis lyonnais11three friends from Lyon. You can select your favorite ingredients (are you more jambon blanc, jambon cru, or bacon? Cornichons ou oignons?) and the number of guests (adults and children) to determine la quantité12the amount of food you will need and to produce a liste des courses13shopping list to help you with your shopping.

The last week saw a number of winners across French news.

And the young Enzo, who I first mentioned back in early November, sadly didn’t win the latest edition of Eurovision Jr. – which was held in France this year – but he did represent, coming in third! France, with 187 points, lost to second-place Pologne16Poland (218 points) and the first-place Arménie17Armenia (224 points).

Vocabulary of the week

I learned a new term this week from this article about the current poor state of les rues de Paris. Potholes are a real problem for riders and drivers of all kinds in cities around the world and in Paris these nids-de-poule18lit. chicken’s nests have lately been an increasing source of frustration.

According to the article, the problem has gotten so bad, riding around Paris is now like participating in the Paris-Roubaix, a one-day cycling race from Paris to Roubaix (on the border with Belgium). The race, one of cycling’s oldest, is famous for its rough terrain and cobblestones.