… Ok, so we’re not quite that far yet. But last year I wrote a series of posts on German Christmas traditions, including the Christkind, and the German history of the Weihnachtsbaum (Christmas tree). What is there to cover this year, I thought, that hasn’t been covered already? Well, my friends, there’s food!

My friends sometimes send me photos of German Christmas biscuits they’ve found in English shops. Lidl and Aldi, German supermarkets now common in the UK, sell them, as do TKMaxx, amongst others. You can also buy them, of course, on online shops including Amazon, and at the German-style Christmas markets you get at this time of year in London and other big cities. So before you stock up on your Christmas treats for this year, take a look at this list and see if there is anything German you want to try! 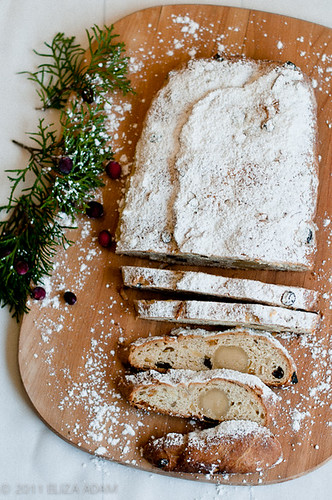 Stollen, also known as Weihnachtsstollen (Christmas Stollen), is a German fruit cake made using chopped, candied fruit or dried fruit, with or without marzipan, and topped with icing sugar. It originated in Dresden and was once called Striezel, meaning ‘loaf’. 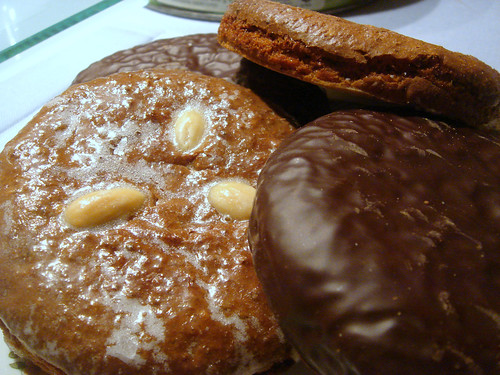 My favourite! Lebkuchen, also sometimes called Pfefferkuchen, is German gingerbread. These soft, cake-like treats come in many different shapes and sizes, often shaped as hearts and stars at Christmas time. Some come on an Oblaten, a wafer-thin, edible white base – similar to those wafers used in Holy Communion in church. There are many variations on Lebkuchen. Some are chocolate-covered, others are plain. Some use spices such as cinnamon and cloves, while others use orange or lemon peel to achieve a more citrusy flavour. 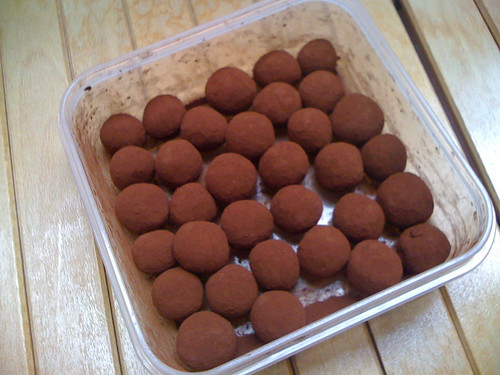 Marzipankartoffeln (‘Marzipan potatoes’) are little Marzipan balls shaped to look like mini potatoes, and dusted in cocoa/cinnamon to give them their potato-like colour. In Germany, these little treats are traditionally given to friends in goodie bags.

Weihnachtsplätzchen (‘Christmas biscuits’) come in all shapes and delicious sizes! It is traditional to bake these at home at Christmas time, but you can, of course, buy them ready-made. 😉 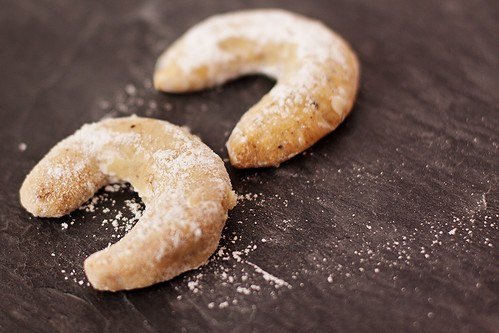 The Vanillekipferl is a crescent-shaped treat made with ground almonds or hazelnuts, and gets its name from the heavy coating of vanilla sugar it has on top of it. The word Kipferl (‘croissant’) is common only to Austria and Bavaria, so in other parts of Germany you may see these bakes called Vanillehörnchen (‘Vanilla horns’), instead. 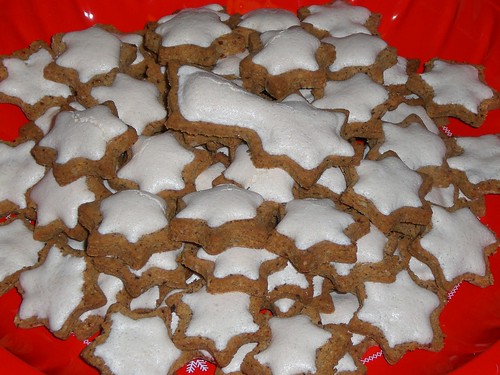 Zimtsterne. Foto: seelensturm on flickr.com under CC BY 2.0

Zimtsterne (‘Cinnamon stars’) are soft, star-shaped biscuits flavoured with almond and cinnamon, and coated in icing. 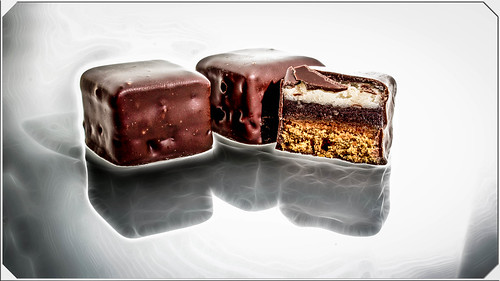 Dominosteine (‘Domino stones’) are square-shaped little cakes that start with a base layer of Lebkuchen, followed by a layer of jelly (sour cherry/apricot) and topped off with a layer of marzipan. They are then coated in dark chocolate. 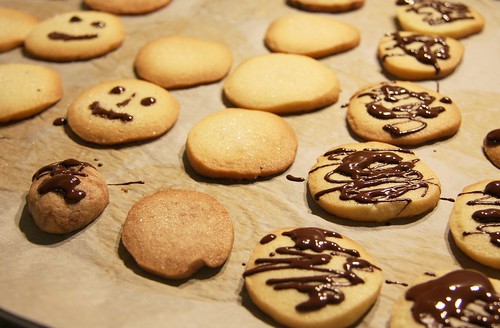 Schwarz-Weiß-Gebäck. Foto: blumenbiene on flickr.com under CC BY 2.0

This so-called ‘Black-White Bake’ is a biscuit with one light section and one dark (cocoa) section. It can have any pattern or design on it, as long as it has both schwarz (black) and weiss (white) sections! This is not the best photo, but it’s all I was able to use. Type ‘Schwarz-Weiß-Gebäck’ into a search engine to see all of the beautiful designs this festive treat comes in. 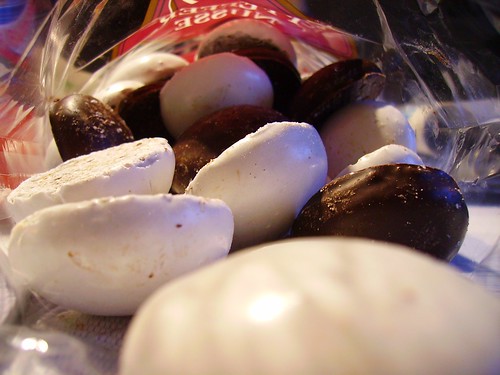 The Pfeffernuss (‘pepper nut’) is a small, highly spiced cookie with a hard outer shell. It is usually spiced with cardamom, cloves, cinnamon, nutmeg and ginger.

A shortcrust biscuit, often depicting images or figures from the story of St. Nicholas. These are traditionally eaten or baked on December 6th, which is Nikolaustag (St. Nicholas Day) in Germany. You may also see it called Gewürzspekulatius – Spiced Spekulatius, if it contains spices.

Which ones have you tried? Which one is your favourite?!