Guten Tag! Is it snowing where you live? For me, there’s nothing better than that moment of seeing snow outside and exclaiming Es schneit! to whoever will listen. Today I’d like to give you a very different way of saying ‘It’s snowing’ in German. ‘Nahaufnahme vom Schnee’ by Marco Verch on flickr.com under a CC license (CC by 2.0)

A unique way of saying It’s snowing is the phrase ‘Frau Holle schüttelt ihre Betten aus’ – Frau Holle is shaking out her bedsheets. This is a phrase from Hessen, Germany, specifically. But who is Frau Holle, and what do her bedsheets have to do with snow?

Frau Holle is the title of a children’s fairytale written by the famous Brüder Grimm (Grimm Brothers). Published in 1812 in the first volume of Kinder- und Hausmärchen (Children’s and Household Tales), Frau Holle is the story of a girl who lives with her evil stepmother. The stepmother forces her to sit outside by the well each day and spin. One day, she pricks her finger on the spindle and it falls into the well. She leaps into the well after it, fearing she will be punished, and finds herself in a meadow. There she meets an old lady – Frau Holle – who tells her she can stay with her as long as she helps with the housework – and one thing, in particular:

‘But you must make sure you make my bed properly and shake it out thoroughly, so that the feathers fly – then it will snow the world over.’

The girl agreed, and so the story goes on in typical fairytale fashion (the girl is rewarded for her hard work, while the stepmother’s biological daughter tries the same thing, but is punished for her laziness).

This story actually began not as a figment of the Grimm brothers’ imagination, but as a local legend told to Wilhelm Grimm by his future wife. That is why today, when it snows, people in Hessen say Frau Holle schüttelt ihre Betten aus.

Did you know this phrase? Do you have any expressions like this in your part of the world? 🙂 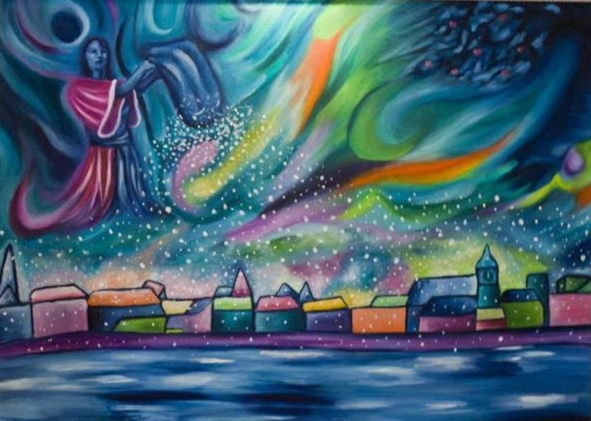